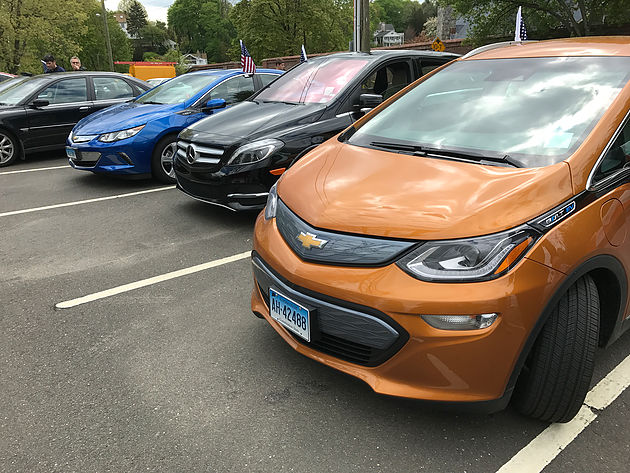 This is the first of several posts that will discuss the EV landscape from the perspective of the directions in vehicle production, the Federal tax credit, the latest with respect to efforts on the part of the State of Connecticut, and some observations about the global outlook.

While this general sales trend is healthy and has withstood a prolonged period of moderate or low gasoline prices, overall sales volume remains in niche territory given the total car/light-duty truck sales of 17.2 million (of which 63% were of the truck/SUV persuasion).

There were 42 distinct plug-in models registering sales in 2017, quite a jump from 27 models just 2 years ago. The diversity of EVs continues to improve and includes vehicles with longer range and of larger size.

Of all of the new model introductions, the most notable are the first mid-price battery electric vehicles (BEV) with a single-charge range of over 200 miles: the compact crossover Chevrolet Bolt and the Tesla Model 3 sedan. The 200-mile threshold was thought to be a game-changer. So how are we doing?

The Bolt rollout was gradual and full national distribution did not occur until fall 2017. It quickly rose to become the largest selling plug-in for GM with 3,227 units sold in December, a respectable number by EV standards. The Bolt sales figure for December is the second highest for a GM plug-in, bested only by the 3,691 Volts sold in December 2016.

Tesla, after reportedly booking over 200,000 reservations in the USA alone with refundable deposits, has only produced 1772 Model 3s since the first one rolled off the line in July. There was some encouraging news in that the December number increased to 1060 following November at only 345. Nonetheless, prospective Model 3 buyers must remain patient. If Tesla can wrangle their manufacturing bottleneck, and if some reservation holders don’t bolt for a Bolt, the Model 3 at present appears to be the only plug-in that can approach a reasonable fraction of the monthly sales volume of a top-selling gasoline car (currently the Honda Civic at roughly 24,000 units per month. The top-selling vehicle is the Ford F series pickup at about 73,000 units per month.)

In the case of Chevrolet, the rise of the Bolt has correlated with a decline in Volt sales. Chevy sold 1937 Volts in December, a 48% decline from December 2016. This could be due to an easier to explain user proposition for a BEV relative to a plug-in hybrid (PHEV). Both offer industry-leading electric range in their class (Bolt – 238 EV miles, Volt – 53 EV miles + 370 gas miles). Both have been well-received. But the PHEV world is complicated to explain. The category has tremendous variation across vehicles from the perspective of engineering, performance, and range. And many PHEV drivers make efforts to maximize their mileage using the battery.

That said, the PHEV powertrain isn’t going away anytime soon. In 2017, the market was roughly split with PHEVs having a 53% market share (based on unit sales). The manufacturers are looking to introduce electric versions of their top selling SUVs and trucks. The only way to get there today is the PHEV format.

There were 2 introductions last year of mid-priced vehicles in these larger categories, both PHEVs. The Chrysler Pacifica (minivan – 33-miles electric) arrived along with the Mitsubishi Outlander (compact SUV – 22-miles electric). These join pricier options available from BMW, Volvo, and Mercedes. All of these have modest sales to this point (defined as under 1000 month).

Toyota, the company that pioneered the hybrid category with the conventional Prius parallel hybrid has finally produced a vehicle that is making a sales impact. This is the second generation plug-in Prius (PHEV), the Prius Prime. The electric range is 25 miles and the base MSRP is under $30,000 before incentives. Sales of this model reached 2420 in December, higher than the Volt.

Another major manufacturer that has heretofore been mostly on the sidelines, Honda, introduced both a BEV and PHEV version of its clean-energy nameplate Clarity.

Below are the market shares in the US for each manufacturer as reported by Inside EVs. 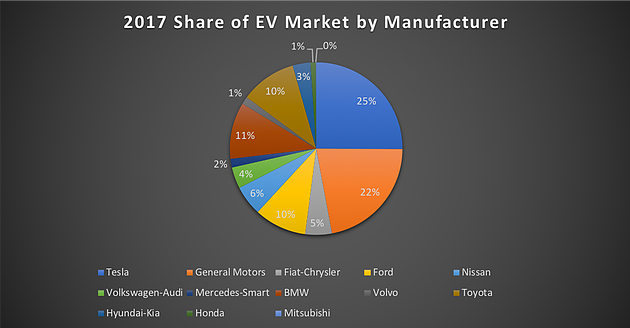 The most obvious reason for a major change to the landscape is a ramped up Tesla Model 3. All of the major manufacturers have made announcements about dramatically scaling up the number and variety of EV models they produce. Within the next five years, it seems likely that between 100 and 200 new models will be available. These are the vehicles that we have seen specifically announced for 2018:

This is a good reference of currently available vehicles from Plugincars.com

2018 is the year that some manufacturers will bump against the ceiling of the Federal tax credit. More on that in the next post.