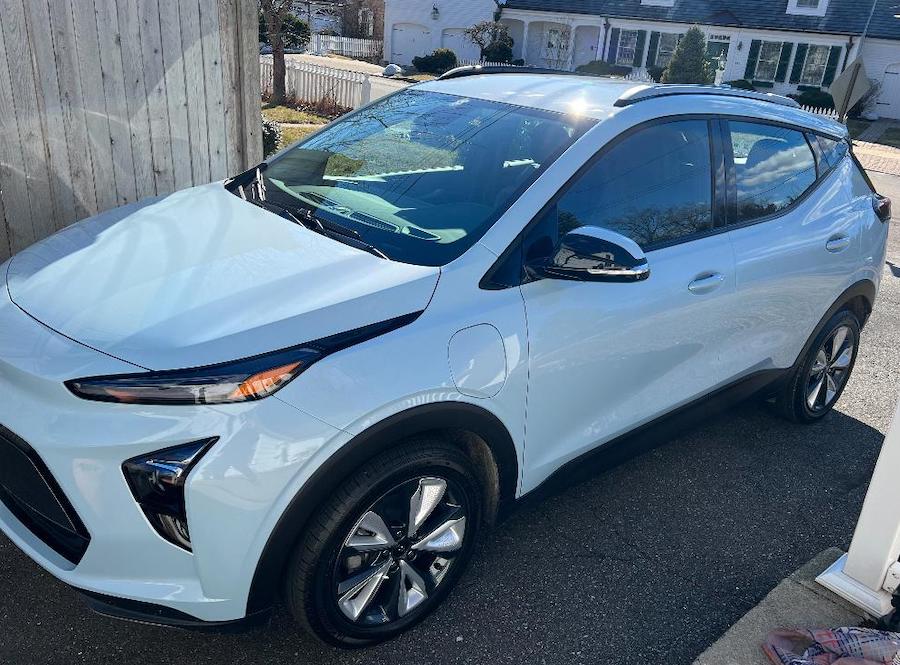 Interminable Bolt Recall May Finally Be Coming To An End

The lengthy, slow-rolling nature of the recall that ultimately involved every Chevy Bolt that GM ever built began as far back as late 2020. There were infrequent battery fires, the cause of which was difficult to pin down, along with an inability to identify which vehicles were at risk. And so in stages, the recall involved vehicles from different model years, with batteries from its supplier, LG Chem, that were built in Korea and then later at a plant in Michigan. Add to that the fact that GM wasn’t telling its customers (or dealers) much. True, they were trying to figure it out, but arguably they should have done a much better job of keeping in touch with their customers. Some of this was detailed in an earlier blog post from last year which characterized GM owners as “treading water.” Some owners displayed considerable patience; others were frustrated.
At this point, the situation is slowly resolving itself and this is a story from a club member and Bolt owner, Nancy Iddings, where all’s well that ends well. This is from an email that Nancy sent to the club, lightly edited and used with permission.

Working Through the Options

After going back and forth in September – October of 2021 with my GM concierge, Courtney, about what I wanted to do with my 2019 Bolt with the defective battery, I told her I wanted the Repurchase choice she gave me because, at that time, I wasn’t getting a clear idea of when the batteries would be replaced even though that was a remedy I could live with. She said that was fine, and she would send all my documentation I had sent her over to the GM Repurchase Department, which she did.  It would take at least 6 weeks for them to respond. Ok.
Around November I began to communicate with Hamden Chevy. At that point they had little knowledge of when a new battery (module) would arrive but they would get back to me. After a few weeks went by, I called, and Steve the Service Manager said he was “thinking of me” but still didn’t know when GM would ship batteries. So I just had to be patient and hope for best. Then around the 3rd week in December, he called me and said batteries were on their way. I was 7th in line.  Great! By the first part of January they scheduled me for replacement, I took “Little EV’ in, they gave me a loaner at no cost (just gas, it was so strange to have to top it off when I returned ICE car because I hadn’t used a gas pump in three years). So replacement went well, I was happy to finally have remedy.

Meanwhile a week later the GM Repurchase Agent, Lisa, called.  She told me that she would be glad to help with a Buyback of my 2019 Bolt LT or an MSRP Swap.  I explained that GM and Hamden Chevy had replaced my battery already (which met the CT Lemon law requirements) and all was good. So I assumed GM would rescind on the buyback or swap. Nope, it didn’t matter, she said. GM would still buyback my Bolt or do an MSRP swap. Hmmm…okay. I was curious to see what they would pay for buyback, so I sent photos of car to them and more paperwork. GM sent a buyback offer for $26,300. (I had low mileage on the car). Pretty good since with rebates and tax credits available in 2019 I really only “paid” $29,000 for 2019 Bolt. But in this car market, what would I buy because I still wanted an EV?  (Hyundais are nice but around $45,000). So I asked if I can still get the MSRP swap.  I had communicated with others who had done this on a Bolt FB group and it seemed viable. She explained I could swap into ANY GM product but I love the Bolt.

Lisa explained GM had produced 2,500 of the 2022 Bolt EUVs (which is what I wanted) in November 2021.  She said I would have to turn down Buyback but then just go to a Chevy dealer and tag a new car, which I did:  a 2022 Bolt EUV in Ice Blue from the “swap list.”   Doug Shatas, the EV guy at Hamden Chevy, was great, and we went through process step-by-step, along with Lisa at GM. So now we are into mid-February so again I waited. Both Lisa at GM and Doug at Hamden Chevy sent emails on where my car was and when it would arrive by train. Finally last week got call from Doug that it was at the dealership. Here’s where it gets better.  Because the MSRP on my 2019 Bolt was $40,000 and the MSRP on the new Bolt EUV 2022 was $35,000 I ended getting not only the NEW CAR but a check for $3545!  I had to pay the destination charge and document fee but that’s it! So I picked up car yesterday in Hamden and I get my check from GM (has to clear) next week.  To say I am a happy camper is an understatement.  I’m sending you pics of my old Bolt and the new Bolt. It was a rocky adventure sometimes but I couldn’t be happier with Hamden CHEVY and GM. Long story but thought you would like to know. We all love happy endings.
Pix clockwise from upper left. New Bolt EUV, Nancy with new Bolt, Interior of Bolt EUV, 2019 recalled/repaired Bolt 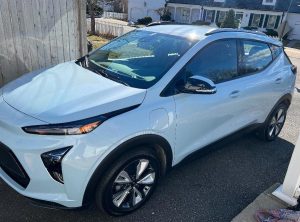 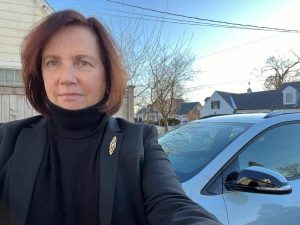 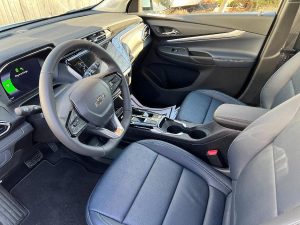 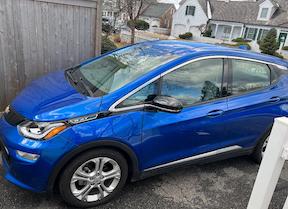