Rebates Are Down 81% Based on Early Data

CHEAPR is the Connecticut EV purchase incentive program, administered by the Connecticut Department of Energy and Environmental Protection (DEEP). As of October 15, DEEP lowered the incentive levels for all battery electric vehicles, plug-in hybrid vehicles (but not fuel-cell vehicles), as well as lowered the price cap that determines vehicle eligibility. We described these changes in detail here.

As reported in the YaleDailyNews.com, “DEEP representatives told the News that the incentive decreases were necessary to keep the program running.” In other words, they are worried about running out of funds. In legislation passed earlier this year, CHEAPR was funded to the level of $3 million per year through 2025.

Our concern has been that the reductions are too large and that the lower price cap would exclude, in particular, the number one selling EV (by a mile), the Tesla Model 3. The early data seem to bear this out.

DEEP publishes data with a bit of a lag, and as of this writing on Dec. 8, there was a Dec. 2 update published with data through October 31. Also, there isn’t individual day granularity; there are certain interval boundaries that we have to work with. Finally, we don’t know if purchases made before the change, but where the vehicles were delivered afterward, are grandfathered in. All that said, the pattern that emerges is so clear it is like a punch in the nose.

The number of vehicles for which rebates were issued declined by 81% (from 119 to 23). The dollar amount of the rebates is down 90%. The number of Model 3 rebates declined from 58 to 5. If a straight-line run rate is calculated from the post-change 13-day period, the program would disburse slightly over $600,000, well below the $3 million allotted cap.

It is possible that their internal projections that led to the reductions are based on sales forecasts that aren’t supported by current trends. In the legislation that authorized the funding, there is a provision to establish rebates for used vehicles, which has not been done to date. From our perspective, this is the tail wagging the dog. Let’s make the program work. If it runs over budget, we would rather deal with a problem of success. If these changes hold, it will have undermined the intent of the legislation passed in the spring.

The data from DEEP

Dates are noted in the upper right corner. 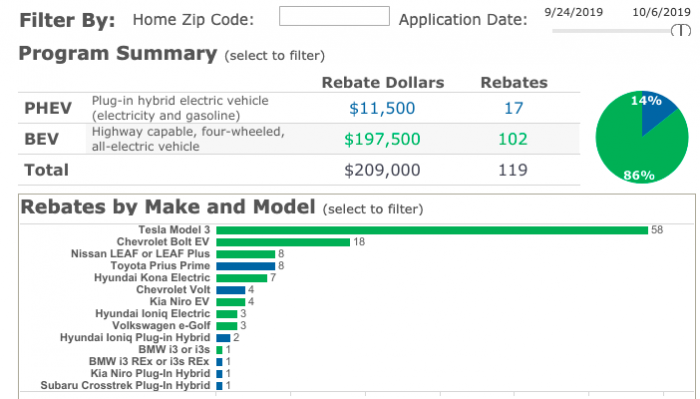 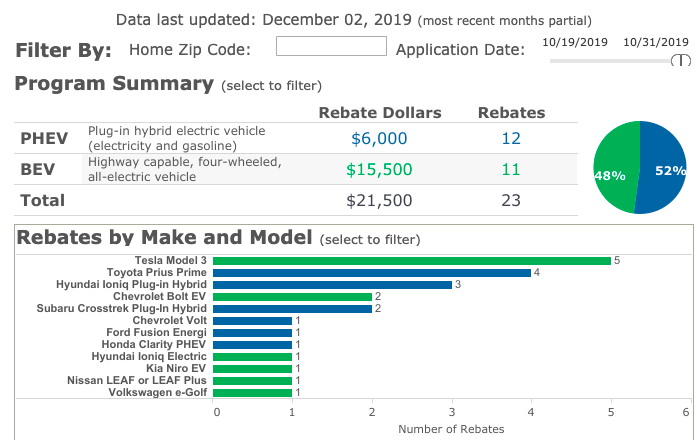 We expect to publish a subsequent update as more data become available.

1 thought on “CHEAPR Falls Off a Cliff”