Expansions to CHEAPR, courtesy of Public Act 22-25, passed by the legislature last year, effective as of July 2022, implemented piecemeal as they are built, will see the remaining parts come online this year. The new pre-qualification process for income limited incentives should be ready by the end of March and the “non-personal” incentives (businesses, municipalities, etc.) should be ready at some point in the second quarter. Unlike the cash on the hood consumer rebates, the non-personal incentives will have a post purchase process to claim the rebate. These will tell the tale as to whether the program will accelerate to a higher level. We are also expecting DEEP to expand the list of eligible used EVs, which we feel are unnecessarily constrained to only vehicles that were eligible as new vehicles.

November was similar to October with 121 rebates, slightly higher than the 112 (slightly restated) for November. Below is the distribution by model with the Tesla Model 3 the largest, followed by the Toyota RAV4 Prime PHEV and the Chevy Bolt EUV. The file sometimes breaks out different trim levels, which is what happened with the RAV4, where the SE (2 rebates) was reported separately. As we’ve noted before, CHEAPR can be a useful proxy to gauge which models that fit under the price cap are resonating with consumers, but it does that less well in this period where there are supply shortages. For example, even though the Bolt EUV looks like it is successful, GM is still dealing with recovering from the extensive recall and as a result, it is building replacement battery packs alongside new vehicles. That is a GM specific circumstance, but it has the same effect of constraining deliveries.

There was one income-limited rebate in November, a used Chevy Bolt. 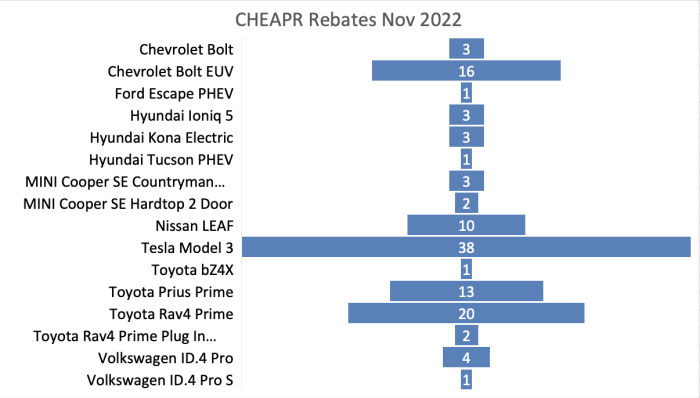