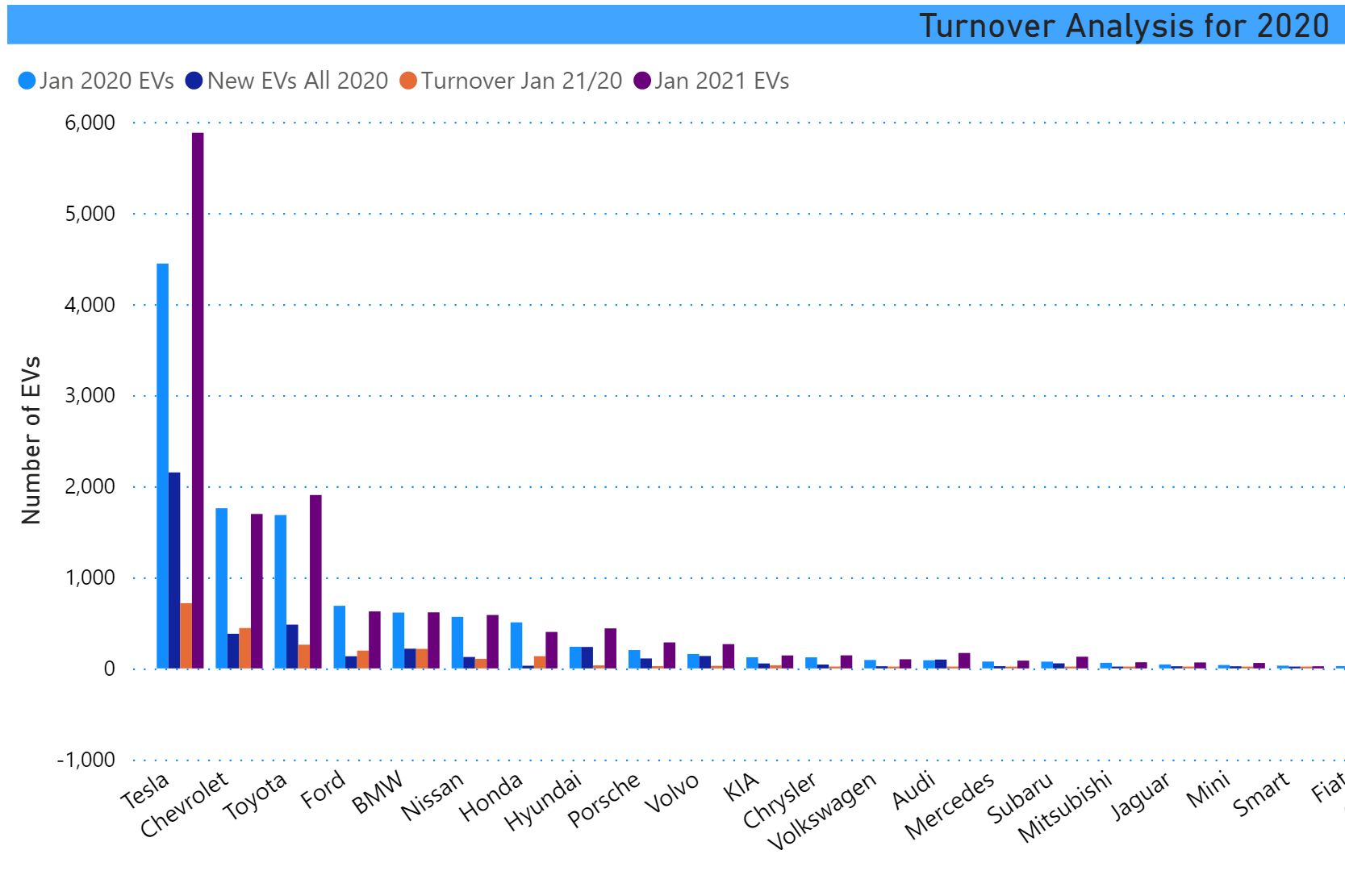 EV registrations in Connecticut increase 18.2% in 2020, a not great number in a very difficult year. However, as difficult as the year may have been, CT can be its own worst enemy with no direct sales and an underperforming purchase-incentive program. The chart below breaks this into the first vs second half of the year, clearly showing the effect of the lockdown followed by a modest recovery. 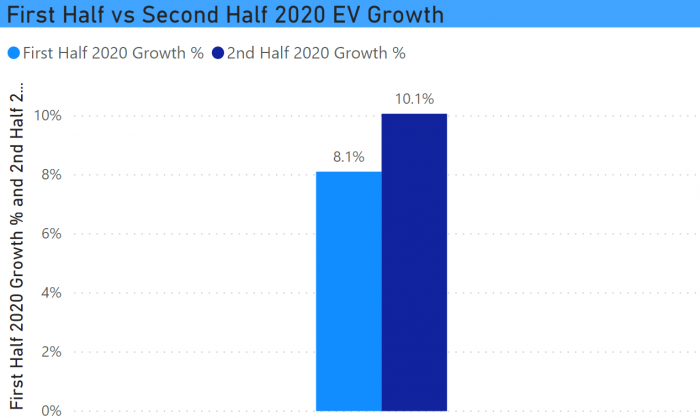 In January 2020, there were 11,677 EVs registered in the state. 4408 vehicles were added to the file over the course of the year. But we ended the year at 13,800. In other words, there were 2285 EVs that left the file. The numbers varied considerably by brand. Tesla had the lowest percentage of the major brands with the equivalent of 33% of the incoming vehicles turning over. Honda had the highest percentage, and off-the-charts 462%. Which makes sense, since Honda basically stopped selling its one plug-in model, the PHEV Clarity, in 2019. (We hear it is coming back.) As cars were sold or leases expired, no replacements were entering the fleet. This table lists the top makes, ranked by the number of EVs registered on January 1, 2021.

The same data drives the chart at the top of the post. Each of the components is its own bar. The table and the bar chart come from the EV Dashboard, where they have full interactivity and slicers.

The obvious question is why the differences. We can try to infer. Some of it may have to do with leasing. A dealer on the CHEAPR board meetings reports that leasing is 50% of his new car business. That is higher than the national norms we’ve seen in Statista and other sources, but there is no doubt that leasing is big. Tesla came late to leasing and has yet to offer a buy-out option. And their cars have longevity. It is quite possible that a higher percentage of buyers equates to lower turnover.

One comment mentioned by a dealer during a CHEAPR board meeting bears repeating. This person said that a significant portion of EV leasing customers coming to the end of their lease return to ICE in order to save money, especially given that they cannot get another CHEAPR incentive due to the program’s once per lifetime limit. His suggestion: allow leasing customers to get the incentive twice but cut it by 50%. It’s a thoughtful suggestion and would also have the benefit of lowering the program’s burn rate for 2-3 years until it normalizes.

Aside from leasing, there is sales volume. Chevrolet and Ford, which are the largest brands with net negative registrations (i.e. turnover in excess of 100%) similarly suffer from a variation of what is happening with Honda, namely cancellation of nameplates coupled with a lack of other sales volume to replace the departing vehicles. In the case of Chevy, the near-term recovery plan is a redesigned and lower-priced Bolt and a reasonably priced EUV Bolt variation. We’ll know at the end of the year how these will have fared. Ford, on the other hand, has what may be a significant win with the Mach-E, the EV crossover Mustang. There is a limited production run in 2021, which has been reportedly sold out (with dealers tacking on extra markup as reported in Carbuzz.com).

Similarly, the 99% BMW turnover and the 84% Nissan turnover indicate stasis. On the flip side, low turnover from Hyundai, Porsche, Volvo, and Audi could indicate some renewed vigor. Sales volume for the Audi is currently very low, but an ultra-premium brand like Porsche, placing in 9th position, indicates some success in a niche market. However, there are a lot of cars vying for this small segment, with the new Tesla Model S Plaid, for which it is too soon to have registration data,  the presumptive early favorite.