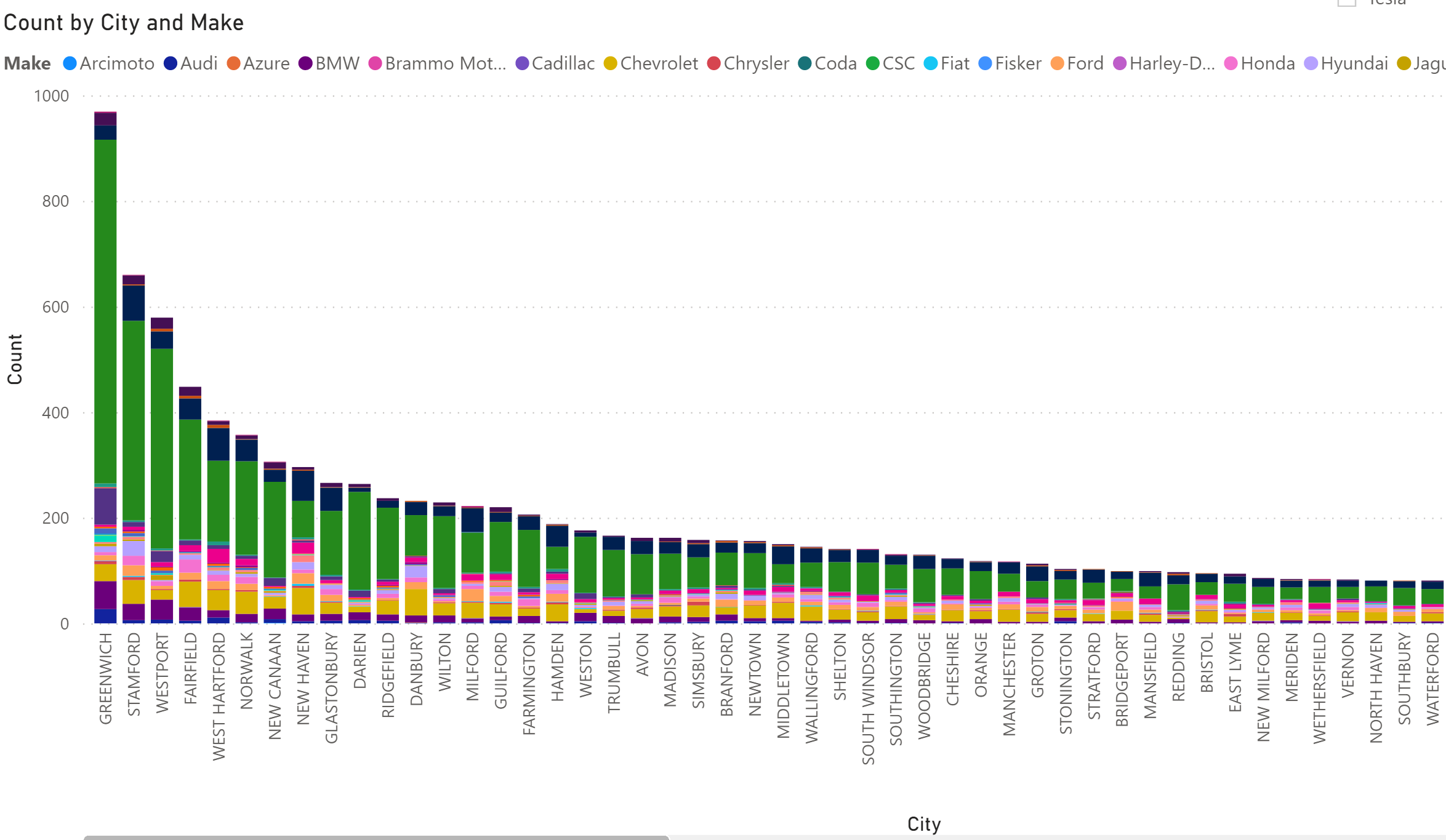 Estimates of EV Fleet Composition by Make Within City

This is something we haven’t published in a while. Not that we don’t find it interesting, but the DMV broke apart the geo from the vehicle data and has been giving it to us in a separate file. So we lost this. Their reason was that it was too close to the line of a privacy violation, that if we were to cross a low-volume vehicle with the city, someone could deduce who the owner might be. (We don’t get any personal information in our files.) While I respect their concerns, it never created any issues back when we did have it.

So I took a shot at knitting the information together and here it is. So remember: blame me, not the DMV. I was able to do a little bit of cross-referencing with the Westport Grand List and what I saw lined up nicely.

The chart at the top of the post color-codes the different makes within each city. It is easy to guess which part of the bar is Tesla, but beyond that, it can’t really be seen in a screenshot. This is now a page in the dashboard (page 19 – scroll down for page nav) and there is full interactivity. Slicers are there for both city and vehicle make. Hovering over a chart element will display the make and the count. And the profile changes quite a lot when sliced by city or make as a different socio-economic profile will be reflected in a different vehicle composition.

The two most widely registered Marques are Tesla and Toyota. Here is an excerpt of the Tesla profile: 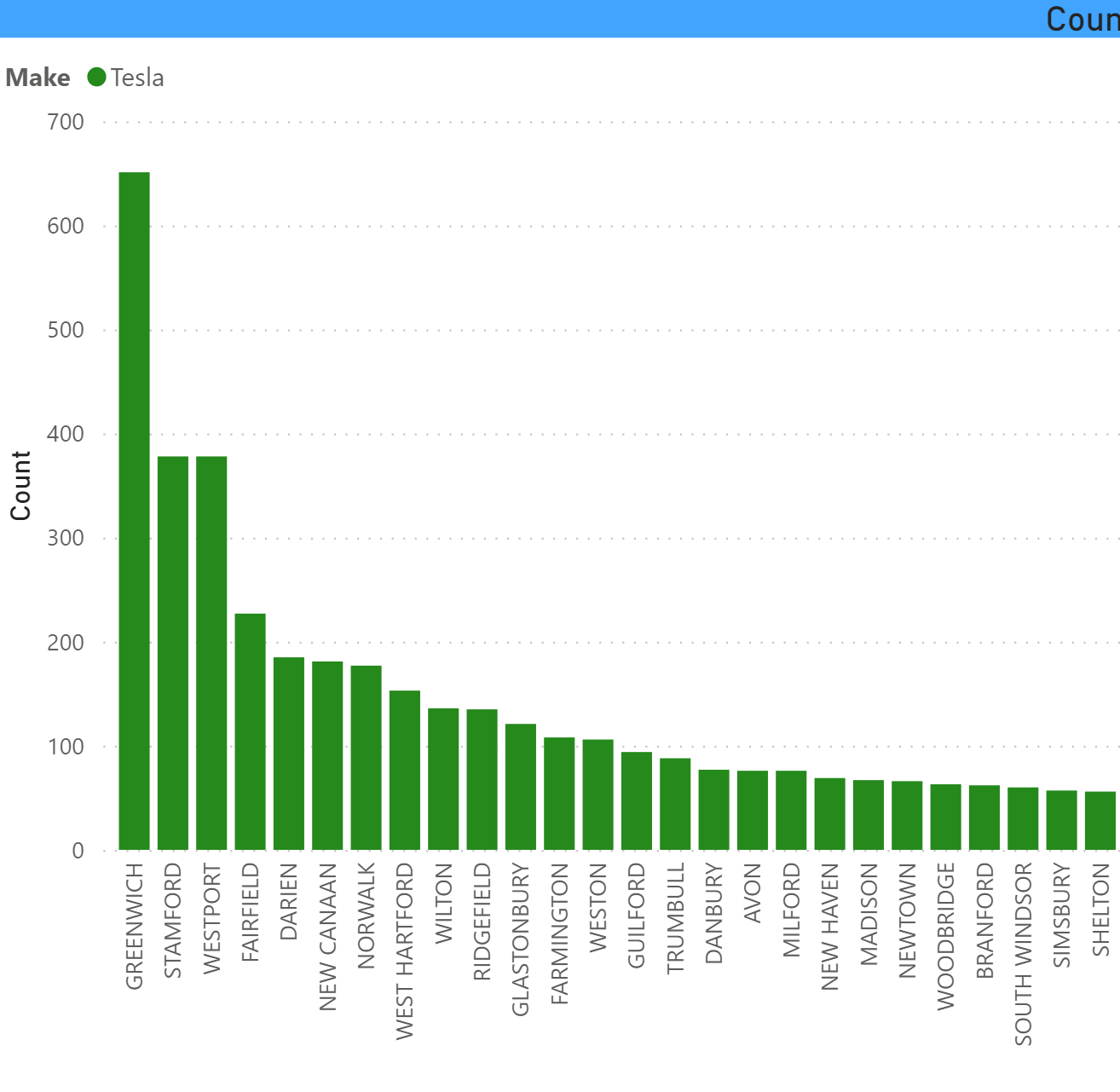 And here is how it contrasts with Toyota, where there is less Fairfield County and more larger cities: 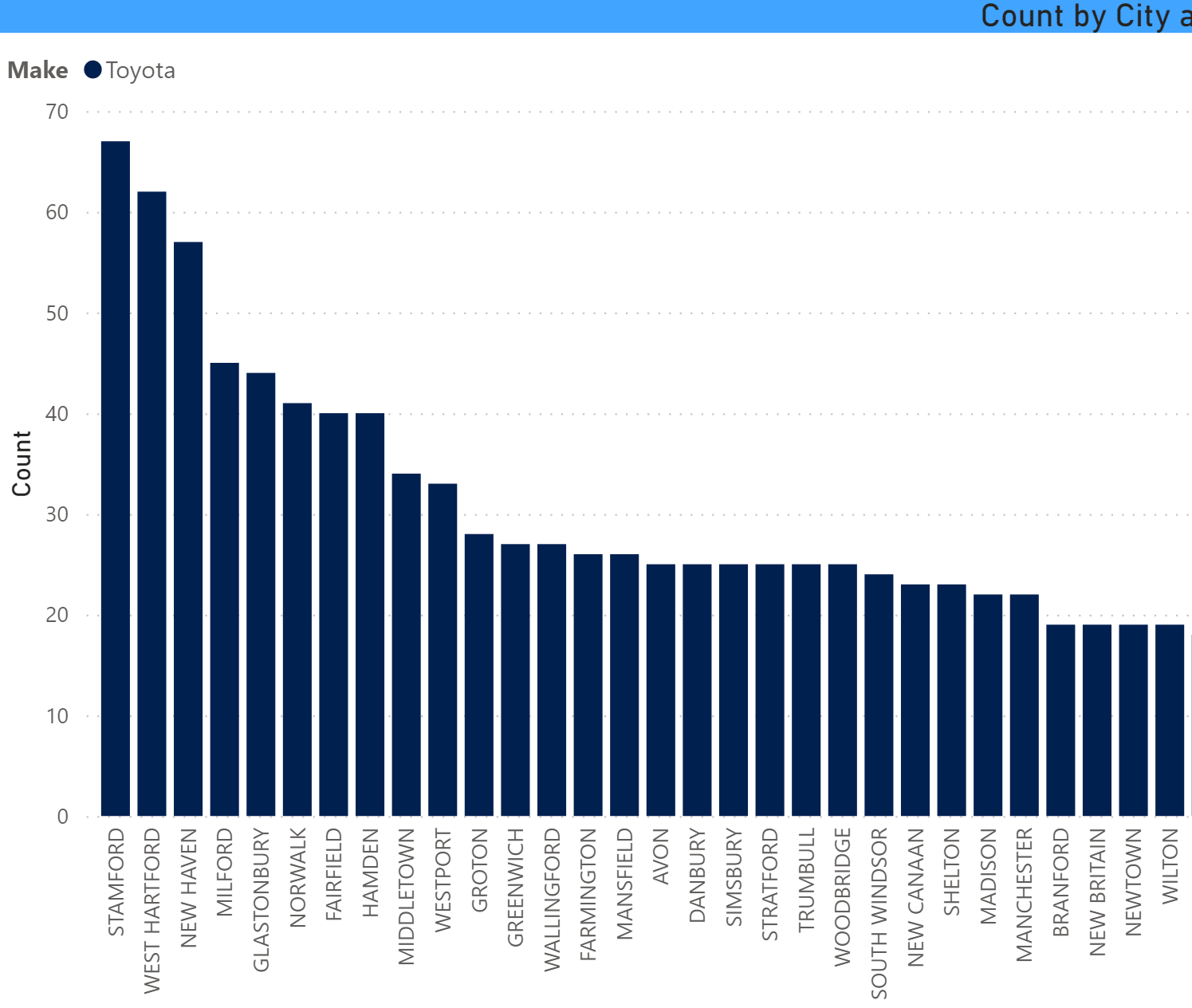 Sometimes it appears as if the profile could be influenced by a single dealer. Dealers are often a pain point in the EV landscape, but that is not the case for all of them. This excerpt is Audi, which, overall, has a fairly low volume. Of course, people can buy their vehicles from someplace other than where they live. But it sure seems like New Country Audi in Greenwich might be making a difference. 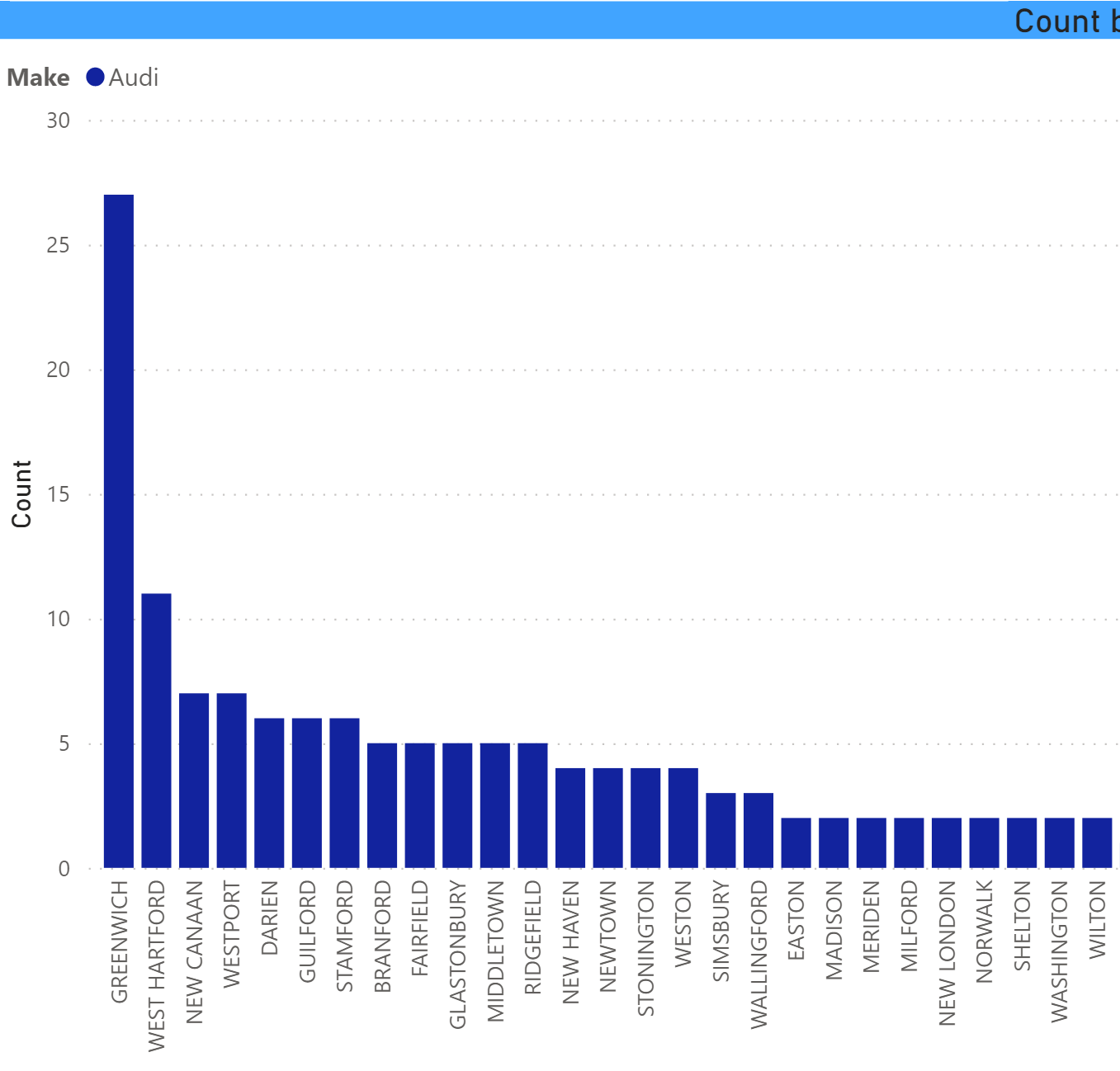 The same seems like it could be true of an even lower volume make, Jaguar, where Westport is over-represented. There are Jaguar dealers in Fairfield and Darien. The Fairfield dealer has been a sometime attendee at our meetings and they could be the ones making an effort with the i-Pace. 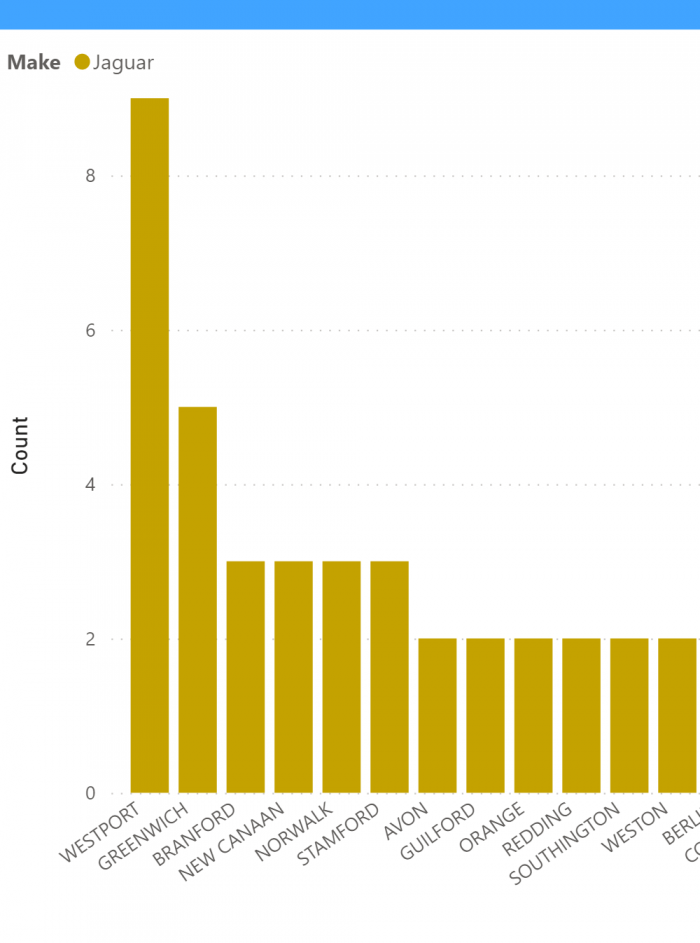 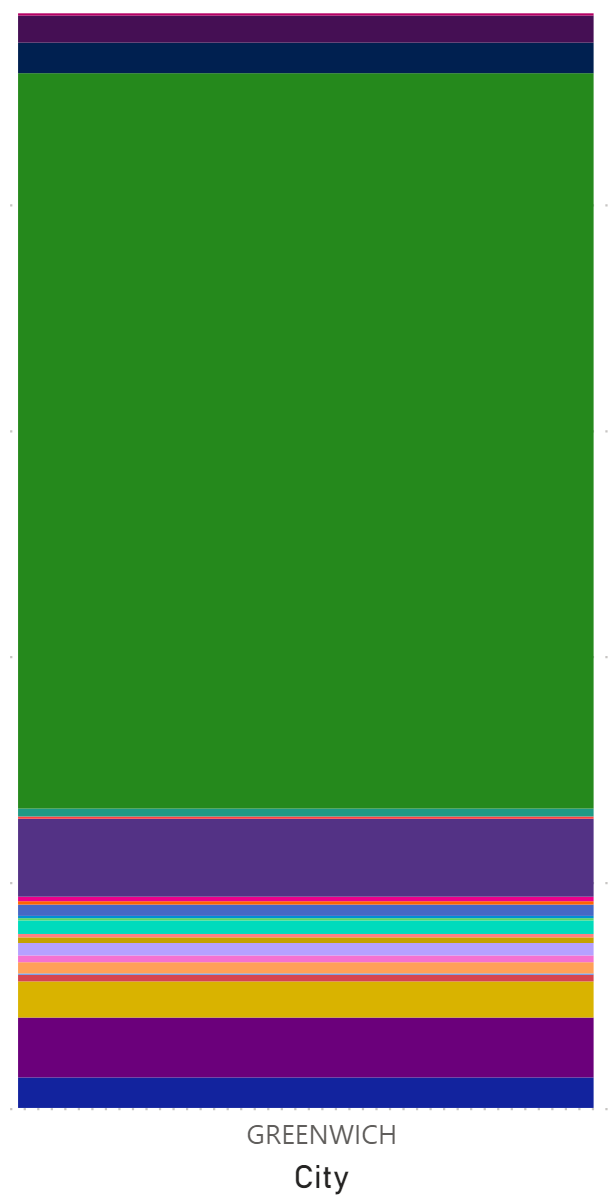 Finally, this is a close-up of a single city, in this case, Greenwich, which has the most EVs of any city in the state. The green represents the 651 Teslas there. The second most-widely registered vehicle make is Porsche with 69 EVs. This is the purple band a couple of places below Tesla. There are 969 total EVs in Greenwich, an increase of 105 over the final 6 months of the year, or 12.2%, which outpaces the rate of increase for the state as a whole.

1 thought on “EVs by Make by City”