New CHEAPR, Though Still A Slow Pace of Rebates

There were 57 CHEAPR rebates awarded in July, the first month where the higher MSRP cap, now $50,000, was in effect. This was the same number as in June. We don’t expect to get a clear reading on the new program for a while given current supply constraints and the fact that the program is undergoing a phased rollout. One aspect that is still a ways from being rolled out is the revised income-limited incentives. The earlier version dating to 2021 is still in place, but there were no Rebate Plus incentives given in July.

We did see the appearance of 2 models that would not have previously been eligible – the Hyundai Ioniq 5 with 6 rebates and the Tesla Model 3 with 1 rebate. The rebate activity continues to be dominated by the Toyota RAV4 Prime (24 rebates). The second most rebated vehicle was the Chevy Bolt with 10. It looks like the Bolt is finally getting past the purgatory of its extensive recall/battery replacement. The newer EUV version accounting for 9 of the 10 rebates. 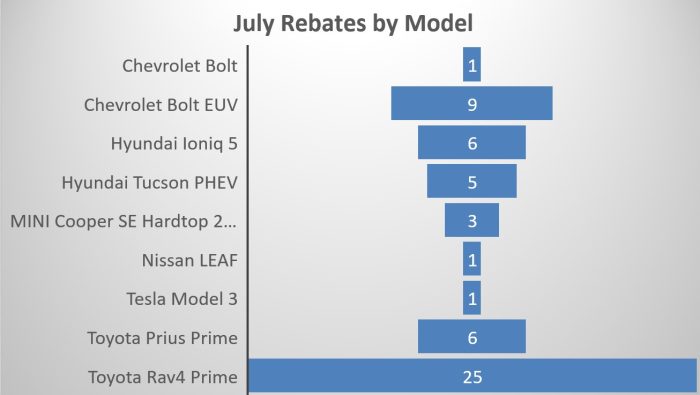