June was a slow rebate month by any measure with just 57 rebates, of which 41 were PHEV. These numbers continue recent trends of a low-volume PHEV-heavy program. The Toyota RAV4 Prime, the popular PHEV SUV, continues to dominate the rebates. There were no income-limited rebates. 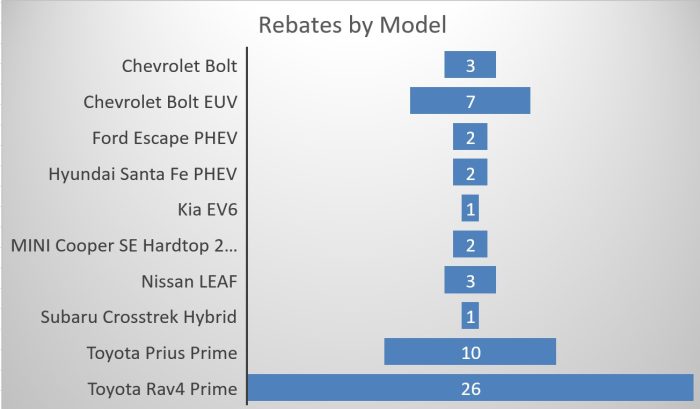 Looking at the trend in the chart in the featured image, one can see the rebate trend increase as more EVs came on the market with the big spike being due to the Tesla Model 3. Then there is a big drop in Q4 of 2019 when the MSRP cap was reduced. There was another trough during the pandemic, followed by a spike due to pent up demand, which has now leveled off at an anemic rate this year. We look forward to seeing more incentives used beginning with July.

The components of the new program as legislated in Public Act 22-25 (previously referred to as SB-4 when it was wending its way through the legislature) are being implemented as they are operationally ready. The simplest change was the increase in the MSRP cap to $50,000. That went into effect July 1. There will be over 10 new vehicles that now become eligible, including some important BEVs such as the Hyundai Ioniq 5 and its sibling Kia EV6, Polestar 2, the Mustang Mach-E, and the Tesla Model 3 Standard Range Rear Wheel Drive. Most of the EVs on the market come in multiple trim levels. The base price of the trim level determines a vehicle’s eligibility.

Looser eligibility requirements for the income-limited incentives. The requirement is now an income level that is a maximum of three times the poverty level. These incentives come in the form of an additional incentive for a new EV or an incentive for a used EVs. Used EVs have to be purchased through a dealership (either a new or used dealership, including virtual, i.e. not private sales) to be eligible. DEEP may revise the size of these incentives. We’ll update when we are closer to implementation, which will most likely be near the end of the year.

CHEAPR since 2019 has been residential only, but now it is extended to business, non-profits, municipal, fleets, and tribal entities. This is expected to be implemented as of the fall. After the next board meeting in September, we should have a firmer idea.

$500 rebate for eligible e-bikes (income limited). ETA unknown, but probably around the end of the year.

All licensed drivers are entitled to use the rebate twice (beginning as of June 2021). The newly eligible categories, such as businesses or municipalities get up to 10 rebates per year with a total cap of 20.

Most, if not all, state rebate programs have to steward the budget carefully. If the funds are expended before the next replenishment, the program either has to be suspended or the rebate can be granted and paid after the fact. Neither is an appealing scenario. NJ is a case of the former, where the state burns through the money and rebates become unavailable for a period of time.

CHEAPR has had 3 different funding mechanisms at different points since its inception in 2015. Prior to this new relaunch, the legislature had funded the program at $3 million annually since 2019. It isn’t a robust amount and DEEP has been concerned, based on modeling from its consultant, about program over-spending. However, DEEP made cuts to both the size of the incentive and the MSRP cap, which caused the program to be vastly under-spent. The unpredictable variable has been utilization rate. A persistently lower number of eligible purchasers have availed themselves of the rebate than projected.

The higher MSRP cap and the new enhancements will increase the spend substantially. The consultant again modeled that if the utilization rate ticks up, the program could run too hot. Should we be concerned about budget?

I don’t think we have much to worry about in the short term, at least until 2024 and probably later than that. The unspent funds get rolled over and the program has a reserve of over $5MM. The budget for the new program increases from $3MM to roughly $8MM by virtue of the entirety of the clean air fees collected going to support the program. With registration moving from biennial to triennial, there could conceivably be some front-loaded revenue. Many of the new enhancements won’t be ready until late in the year. Only $566,750 in consumer rebates were awarded in the first half of 2022 (plus expenditures for admin and dealer incentives) so the reserve will quite possibly increase. Finally, there will be additional funding coming in from the Regional Greenhouse Gases Initiative (RGGI) auction proceeds. It doesn’t kick in right away and I have not heard a specific number, but a ballpark guess is $2-3MM.

Bottom line – we don’t have to be overly concerned and there will be plenty of time to gather data to forecast and make adjustments if necessary.