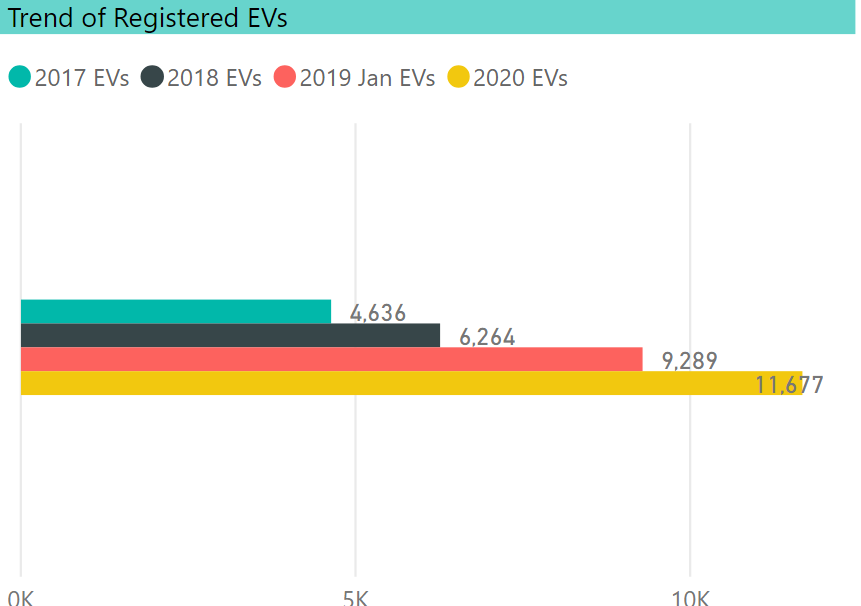 In response to our standing Freedom of Information Act Request, the CT Department of Motor Vehicles has provided the EV Club with an updated file of EV registrations as of Jan 1, 2020.

The data from the DMV include make, model, model year, and fuel type. Keep in mind that each data point is a snapshot of registered vehicles at the time the file was generated. This isn’t vehicle sales. It includes all EVs, whether acquired new or used, whether purchased or leased.

There were striking differences this year by fuel type, something not seen in the past. BEV registrations rose 47%, while plug-in hybrids (PHEV) registrations increased only 8%. This is in stark contrast to the pattern one year ago when PHEVs had more momentum. (There are also small numbers of battery electric motorcycles (BEMC) and Fuel cell (FCEV) vehicles). BEVs now make up a majority of BEVs.

This is the overall trend over the four years of data points we have. The relatively strong BEV number, when blended with the other fuel types resolves to a 26% increase, lower than one year ago. According to the DMV, there were 4120 new EV registrations, which means there was turnover in the fleet of 1732 vehicles.

The landscape for EVs was less forgiving in 2019. Nationally, 2019 saw a year over year decrease in new vehicle EV sales for the first time. Several states have imposed EV fees in the hundreds of dollars in the guise of a “road-use tax.” In CT, Tesla is still prohibited from opening stores, though they have recently obtained a leasing license for their one service center. The CT EV purchase incentive program, CHEAPR, saw cuts made to both the level of incentive and the MSRP cap that determines vehicle eligibility. These changes brought about a 71% decline in rebates. This correlated with weaker growth in the second half of the year relative to the first half (and ran counter to national sales trends). Also, Tesla and General Motors were in the phase-out period for the Federal tax credits. The tax credit for Tesla ended entirely as of December 31. As of March 31, 2020, it will end for GM.

Rate of increase slowed in the second half

The only EV make to have a significant impact on the numbers was Tesla. The chart below shows the 4-year trend of registrations by make. It is truncated to make it more readable. As you can see, a small number of makes are responsible for the bulk of the registrations.

This is a chart of the current registration profile.

This is a chart that depicts the contribution to the change for the last year by each make. Tesla accounts for 65% of the increase in registrations. This was followed by Hyundai with 9% and Toyota with 6%.

If there is a single story about 2019, it is the Tesla Model 3. It accounted for 84% of the Tesla increase. Even though it has only been in the market for about two years, it has become the most widely registered EV in the state, 38% higher than the Prius, which is the second-highest. For our purposes, we combined the Prius Prime with the older plug-in Prius.

Model 3 registrations increased 127% this year vs. last. The Model X had a 33% increase on a lower base. Among the other leading EVs, the Prius, Model S, Honda Clarity, Nissan Leaf, and Chevy Bolt all had more modest increases. The Honda Clarity had a big jump a year ago, but we have read reports that Honda has pulled it back from most states, and this is reflected

2019 was the year that General Motors discontinued the Volt, which at one time, had been the most widely registered vehicle. Volt registrations declined 1% as the car now begins its gradual fade from view. This decline in the Volt, along with the softer performances of the Prius and Clarity, and no new PHEVs making much of a splash are what is behind the low PHEV increase.

The chart displayed below is an excerpt of the most widely registered models for display purposes.