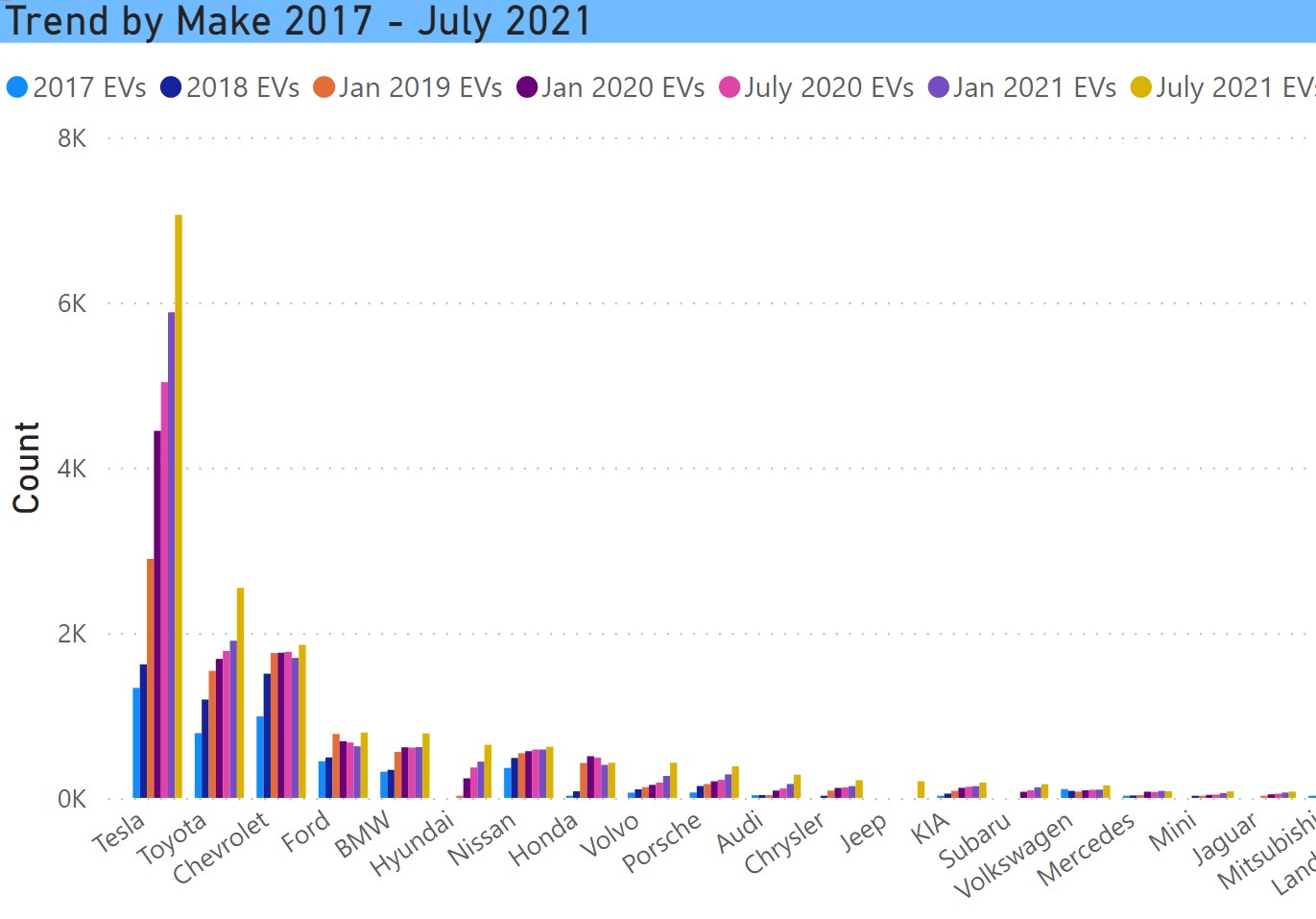 Tesla Continues to Lap the Field

The chart at the top of the post shows the trend of all EV makes and shows net registrations at each point in time. It makes very obvious the fact that registrations are largely concentrated among a small number of companies. This trend begins with 2017, which was the first year we received data from the Department of Motor Vehicles (DMV), and covers every data point we have through July 2021. Beginning with January 2020, updates have been provided semi-annually as that frequency is driven by the statutory requirements for EV reporting imposed upon the DMV.

Tesla has continued to have substantial increases. Toyota had a notable pop. Chevrolet reversed the negative momentum and gained modestly. Ford, BMW, Hyundai, Honda, Volvo, Porsche, Chrysler and Jeep all had modest increases. Other makes had very small increases or were flat.  I will look at the vehicles that were added and drill down to models to see what caused the changes.

The pie chart below shows the vehicles added by make for the first half of the year. Tesla, with 1421 adds, was double the nearest competitor, Toyota, though the latter still had a strong period with 761 adds. The other makes with over 200 adds were Chevrolet, Hyundai, BMW, Ford, and Jeep. 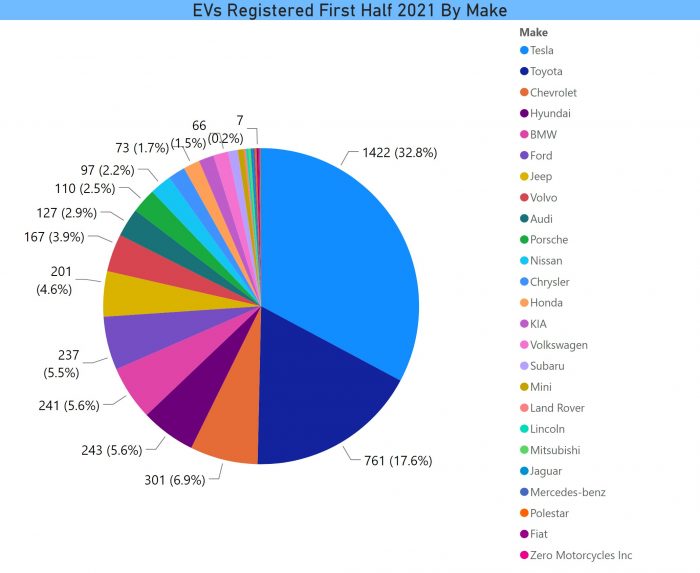 This second pie chart is filtered for BEVs (the title of the chart does not change when the filter is applied), where Tesla accounted for 6 in 10 vehicles added followed by Chevy, Hyundai, and Ford. 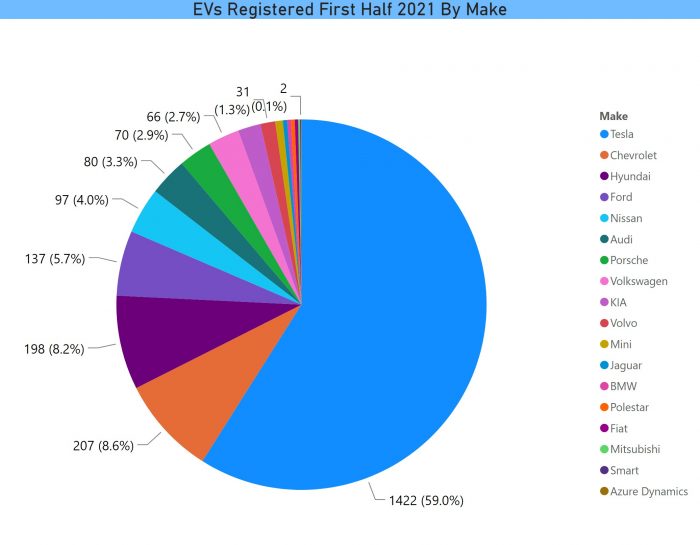 The charts below are a filtered review of net registration trends by model within make (i.e. net cumulative registrations). This provides some context to how lineups and model impact have evolved over time. There is some degree of a rising tide lifting all boats, but there are some new models that are decidedly making a difference. They are presented in order of the number of registered units for the make.

Starting with Tesla, while the Model 3 continues to register significant gains at each data point, and remains the most widely registered model with 3,426 vehicles, the momentum has shifted to the Model Y. The first bar, the small one, for the Model Y is small due to lack of supply. While Tesla still can’t seem to build them fast enough (as of this writing, we are advised of a ~6 month wait for most orders), the delivery count is now substantial at 1,329, approaching that of the Model S at 1,580, which it will certainly pass when we receive our next update in January 2022. Again, we are looking at registrations, but it indicates that the Model Y is outselling the Model 3. Tesla has a new plant under construction in Texas and a new battery design (the 4860) forthcoming. These developments should speed the production of the Model Y and enable Tesla to begin deliveries of the Cybertruck. Inside EVs reports Tesla having over 1.25 million pre-orders for the Cybertruck as of early August.

The next largest make is Toyota. The Prius Prime PHEV has been around a while and had displayed a flattening trend, but registrations jumped in the first half of 2021 to 2,152. This makes it the second most widely registered model. Added to that is a decent start for the new RAV4 Prime, also a PHEV, but with one of the higher electric ranges in its class at 42 miles. There are 386 of them registered and there have been reports of their being supply-constrained. Toyota briefly made a BEV RAV4 in limited quantities. There are 2 of them in CT. The other vehicle here, the Mirai is a fuel cell car. There are 3 of those.

Toyota has been resistant to BEVs for lack of any obvious reason. They introduced a concept SUV this year, the bZ4X, and have announced a plan for 15 BEV models by 2025 (not necessarily all of them for the USA).

The third most widely registered make is Chevrolet. The most widely registered Chevy is still the Volt (PHEV) that was discontinued in 2019. For a time, before the Model 3, it was the most widely registered model in the state. The decline over the last 4 data points is pretty gradual, considering the discontinuation, and could reflect a presence as a used vehicle. Chevy re-introduced the Bolt in 2021 and significantly reduced the price (possibly due to GM phasing out of the federal tax incentive). The Bolt has been a lethargic presence since its introduction, but the combination of the new model and lower price enabled it to register a jump to 787 units registered. The new EUV version of the Bolt was not yet available during the analysis period.

Ford jumped into fourth position among EV makes, very clearly on the strength of the new Mustang Mach-E. Ford has been manufacturing EVs, both BEV and PHEV, for some time without any models getting traction. More recently, they have switched to a strategy of building an EV version of their most iconic brands, the Mustang and the F-150. In the case of the Mustang, it is more a case of branding as the electric Mustang is an EUV. The F-150 Lightning really is an electric F-150 pickup.

The Mach-E BEV has 136 units, enough to make a difference for Ford overall. It has been a supply constrained vehicle and dealers have been selling them above MSRP. The Escape is a successful compact SUV and Ford has introduced a PHEV version. There is only one registered, but it is only just about to be rolled out. The F-150 BEV is not scheduled to begin deliveries until second quarter 2022. Reports are that Ford has pre-orders for over 100,000 units.

The next ranking make is BMW. As you can see, they have quite a few plug-in models. After initially building the stubby, though fun to drive i3, which is primarily a BEV, though there is an option for a small gasoline range-extender engine, BMW has pivoted to PHEV versions of its ICE lineup. The notable model here is the X5 Xdrive40e. The 2021 version boasts a substantial electric range improvement from only 14 miles to 50 miles, plus a 6-cylinder gas engine. It has become BMW’s top plug in with 252 units. There was also a jump for the X3, though only to 74 units. The C Evolution is a motorcycle.

Hyundai is next and the Kona compact EUV is what is driving sales for them. There are 304 Kona vehicles registered. Hyundai announced that Ioniq will become its EV sub-brand, though the Kona is branded Hyundai.

Nissan was one of the first entrants into the EV market with its BEV Leaf in 2010. It’s registration stats have been flat since 2019. As of today, the Leaf is still their only entry, though they have expanded the number of trim levels and improved the range. They are planning to launch an EUV model called the Ariya in 2022.

Honda is a major automaker that has been largely MIA in the EV space. A few years ago, they introduced the Clarity PHEV. Club members who own one have reported a good experience with it and the electric range is among the highest in the category at 47 miles. Due to Honda pulling back on distribution, the number of registered Claritys has been declining. A small increase this year offered some hope, but I read in the publication, EV Adoption, that Honda has canceled the Clarity PHEV and fuel cell models. Honda has announced a BEV EUV called the Prologue for a model year 2024 introduction, along with an Acura stablemate.

Volvo has several EVS, mostly PHEVs plus the new BEV, XC40 Recharge. The company saw a spike from its XC90 PHEV to 227 units registered. This high-end, large SUV only gets 18 miles of electric range. The new XC40 Recharge is off to a slow start with 31 units. Volvo has announced an aggressive pivot to EVs with an all-electric lineup by 2030 and has moved EV sales to its online portal.

Porsche has also been in the game for a while and is a leader among high-end automakers not named Tesla. Their newest introduction, the BEV Taycan sports car, had the biggest increase to 116 units.

Audi got into EVs with the A3 PHEV. It didn’t get traction, but the newer BEV E-Tron has been growing, now at 169 units, as well as to a lesser degree the Q5 PHEV compact EUV with 64 units.

At this point, we start getting into some very small numbers, but I will mention a few others.

Chrysler, which has only one EV, the PHEV Pacifica minivan, rose to 214 units.

Jeep introduced its first EV, the PHEV Wrangler, which had a decent first year at 202 units.

New luxury carmaker Polestar (part of Geely, the owner of Volvo) has only 8 units for its Polestar 2 hatchback. (There were no Polestar 1 vehicles, an expensive, high performance PHEV.)

Mercedes has announced upcoming BEVs, the EQ series, with the EQS (like its S series), EQE (like its E series), and EQB, and electric EUV. The EQS is scheduled to arrive this year. The others will be 2022. Up to this point, Mercedes is another example of a major manufacturer that sells very few EVs. There are 8 models with registered units in the state with the highest being the GLC 350e at a measly 61 units.

Volkswagen, which has also announced aggressive targets for EVs, introduced the ID.4 in this country following a successful introduction of the smaller ID.3 in Europe. At this point, there are only 57 of these registered in CT, but it is still in a rollout phase.

Every screenshot here is taken from the Interactive EV Dashboard, July 2021 on the website. Using the slicers (checkboxes) enables drilldown to individual makes and models as I have done here.