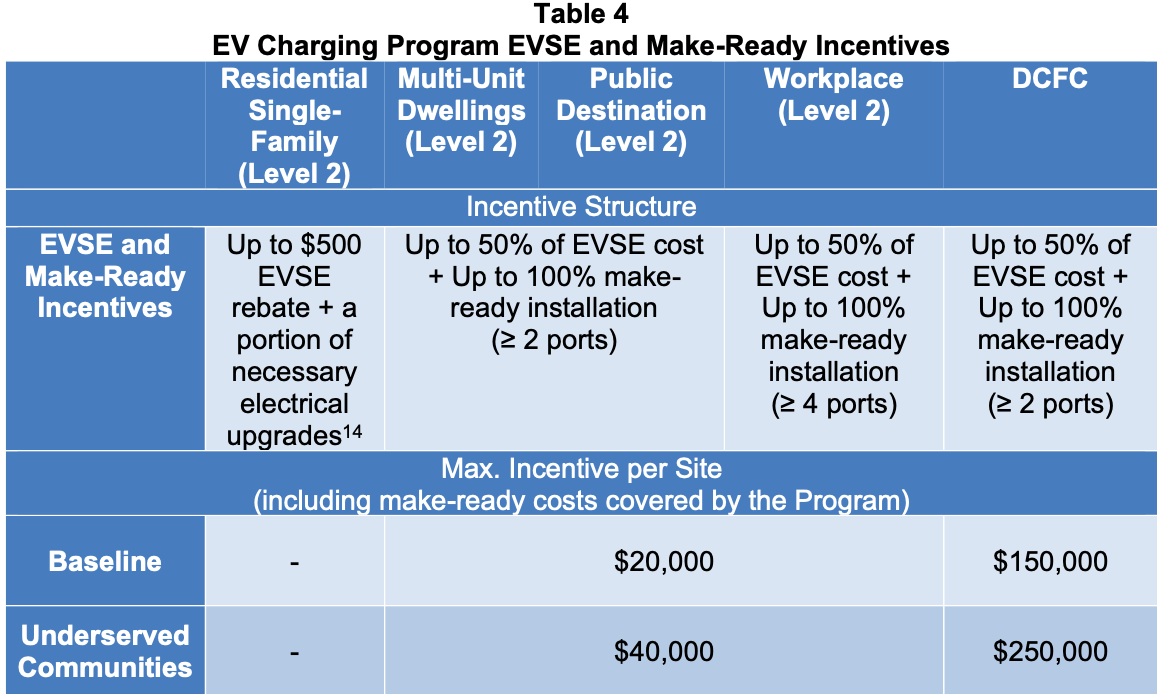 The final rate design adjudication was released on July 14th. Even though it is the final version, it actually isn’t quite final yet. We now know a lot about the program, but the document creates working groups to fill in unfinished gaps on some important details, such as some rates, approved equipment, etc. The PURA doc is uploaded to the website as a blog post here. It doesn’t exactly read like Jurassic Park, but we need this kind of thing if we are to wean ourselves off “dino juice.”

The program is quite comprehensive, containing incentives for residential and commercial, the latter including workplace charging and fleets, and which also applies to municipalities. The incentives cover hardware, service upgrades, make-ready, demand charge mitigation, and discounted electric rates.

It is important to note that this program takes effect in January 2022. It is not retroactive. If you purchase a charger tomorrow, it will not be eligible for the subsidies.

Below is a summary of the incentives referenced in the chart at the top of the blog post. These are hardware and installation-related discounts:

As noted in the first bullet about residential charging, a household can receive an incentive for participating in a managed charging program. There are 2 levels, called basic and advanced. As mentioned earlier, receiving the incentives for the hardware require participation, along with giving the EDC permission to capture data from the charger.

Note: A common way of protecting the grid, which is used in other places but is not part of this program, is time of use (TOU) charging. We are disappointed that this isn’t part of the program because it is a very simple, easy to understand, no maintenance approach. If you charge during off-peak hours, you get a lower rate. Easy. The adjudication specifically states that it doesn’t foreclose moving that way at some future point. There are regular evaluation points built into this 9-year program. And there is nothing to say that TOU can’t be combined with managed charging. Theoretically, if every EV (assuming many more of them than there are today) started a charging session at the first minute of the off-peak period, there could be a demand surge, but managed charging could mitigate that.

There is an existing installed base of EV chargers, and many of these, my guess is almost all of them, are so-called dumb chargers. They are not WiFi enabled so the EDC can’t see or interact with them. The program tasks the utilities to develop a workaround to include these chargers as it could jumpstart program participation. There are existing programs at other utilities, Con-Ed comes to mind, that do just that. With Con-Ed, the driver gets a flash-drive type device to install in the car’s USB port, or with some manufacturers, there is the ability to connect directly to the telematics of the vehicle with the owner’s permission, and incentives will be developed to reward off-peak charging. This actually comes a little closer to time of use. Finally, a recent development is that there is equipment coming on the market that can add connectivity to a dumb charger. PURA is aware of this, as well as developments in better accessing vehicle telematics, and there is the potential for this part of the program to evolve.

The $200 cap on residential demand response rebates seems low to us. The concern is the lack of differentiation between one and two (or more) EV households. We want to see all vehicles participating.

Demand charges affect commercial establishments. If the demand for electricity spikes for a period of time above normative levels, electric rates increase substantially. Demand charges have been a barrier to the installation of level 3 charging stations. The adjudication directs the EDCs to maintain a temporary rate-rider to mitigate demand charges while taking the time to develop a more permanent and sustainable solution. Demand charges were originally developed so that those putting the most strain on the grid contribute disproportionately to necessary upgrades. These rules were developed long before the modern EV and definitely need to be re-thought.

On balance, this is a strong program. We look forward to seeing, and if possible, being a part of, how it evolves. We intend to keep our members informed and hope the outreach, in general, is effective so it hits the ground running in January!