It looked like we were on a roll with rebates having risen from 59 in June to 93 (implementation of higher MSRP cap) in July to 136 in August (restated from an earlier 119), but September has retreated to 114. Maybe it, too, will be restated next month. Hanging over all of this are the continuing difficult market conditions.

I have made a technical change beginning with September. The spreadsheet published by DEEP double counts vehicles/people receiving the Rebate+ New (supplemental incentive for income-limited consumers) rebates. It appears as a separate row in the file (i.e. one row for the standard rebate and a second row for the supplement) and the count reflects the number of rows, not the number of vehicles. (This is not the case for Rebate+ Used, where there is one row per vehicle.) So in the chart at the top of the page, there are 114 rebates listed, as opposed to 116 in the chart on the DEEP website. At this time, it is not causing major differences, but the potential for that to happen will increase when the new program goes live at some point next year.

There were 3 Rebate+ incentives in September – 2 new and 1 used.

Below is the rebate by model chart. 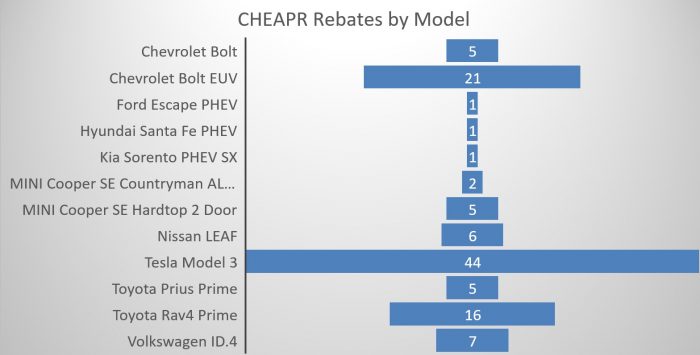 The spike for Tesla is similar to what we have seen in the past when Tesla used to be eligible. They batch their deliveries and clearly a bunch of Model 3 SR RWD arrived (the only eligible model). Also, as we’ve learned, a higher percentage of Teslas that are eligible for a rebate get the rebate. The reason is that it is baked into their order flow process, which is not the case with anyone else. DEEP has reported that there are many eligible vehicles that do not get the rebate.

Chevy may have a success on its hands with the Bolt EUV. Most of the action in the BEV world has been with higher-end vehicles. It is a hopeful sign that a vehicle with an entry price of $27,200 that received 8/10 ratings from Car and Driver and Edmunds is getting traction.

For a period of time, CHEAPR seemed like the RAV4 rebate program as that vehicle had become so dominant. This month is way down. Is it because of inventory issues or is it the continued movement of the market towards BEVs? It is down roughly 40% from where it had been tracking. And the Prius Prime continues to be in a long term decline, which I speculate is likely about the noncompetitiveness of the vehicle and not the supply. Toyota now has one BEV, the bZ4X EUV. It is a 2023 model year, shipped in very limited quantities. Also, it was subject to a recall shortly after it began shipping. Sharp turns or hard braking could loosen a hub bolt, risking the wheel possibly coming off.  Deliveries resumed earlier this month. This vehicle will be CHEAPR eligible. None are registered in CT as of July 1.