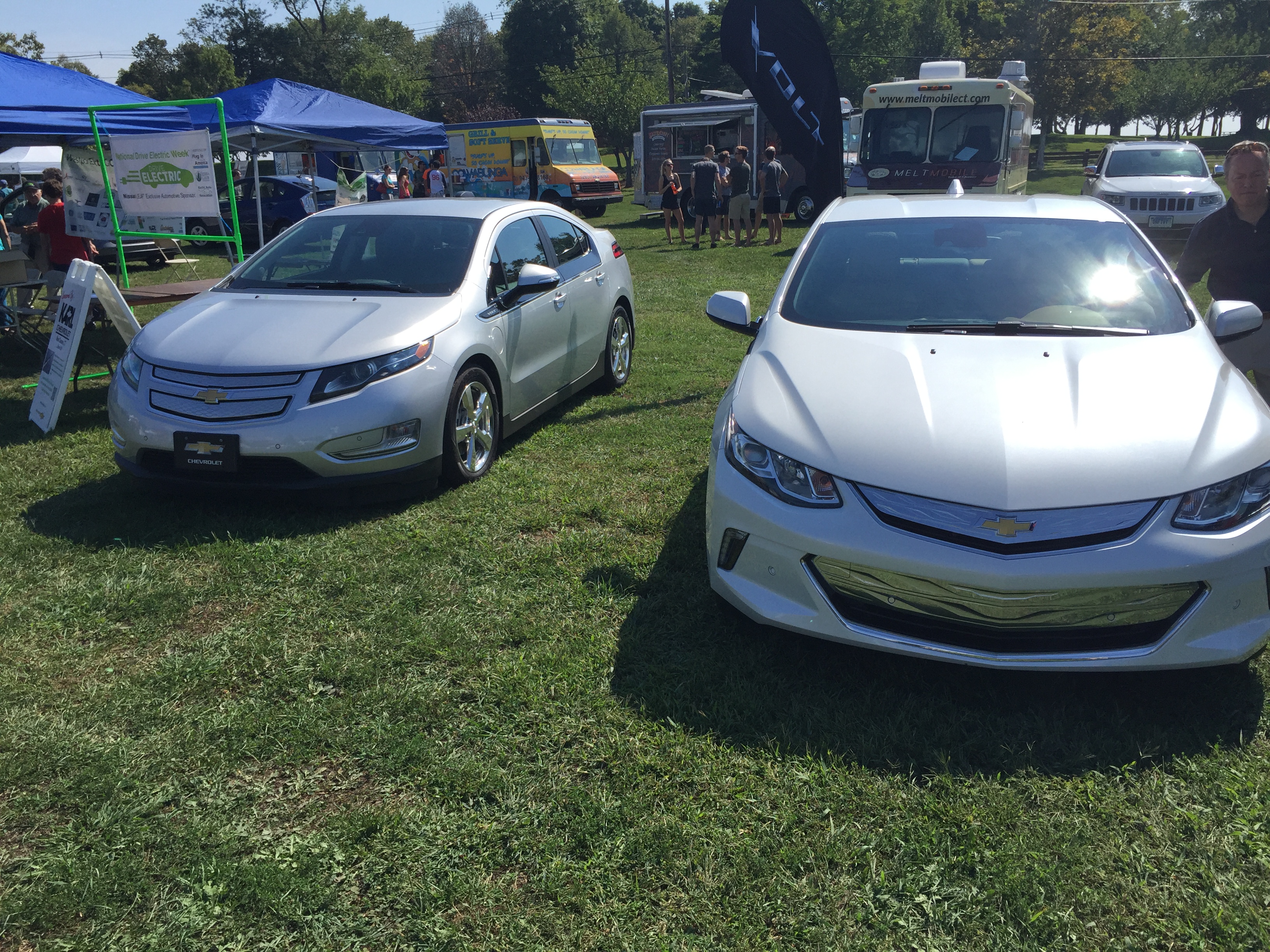 The showroom at Karl Chevrolet (New Canaan, CT), featured, for a short period of time, the Gen 1 and Gen 2 Volt side by side. The latter had been trucked to town for a press event that occurred at the dealership during the afternoon of July 28 to promote the Connecticut EV purchase incentive program CHEAPR. That evening the WECC paid a visit to the showroom to see the new Volt before the freight truck came to cart it back to Michigan.

Club members were able to look and touch, but not drive. This was a pre-production prototype and was not street-legal. Actual production begins in August. The first tranche of cars will be sent to the West Coast. Deliveries locally are expected in late October or November. 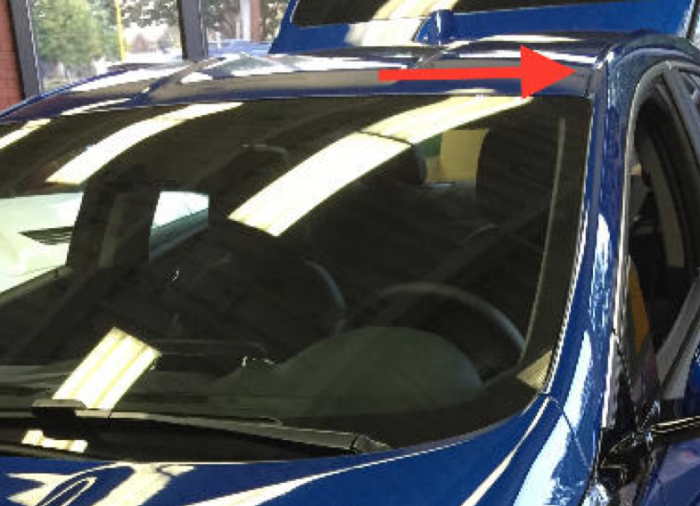 The aerodynamics of the vehicle have been further refined in the new model. There are strategically placed nips and tucks in the bodywork, including where the arrow is pointing in the photo. A small ridge has been molded along the side of the roof so the air is channeled over the back of the car rather than washed over the side.

The center stack has been considerably reworked as seen in the photo below.

The old touch screen had that cool space-age vibe, but not the most user-friendly operation. It has been replaced with a more conventional set of climate controls in the lower section. The upper section is now an iPad size screen which will be fully integrated with Apple CarPlay and Google Android Auto. 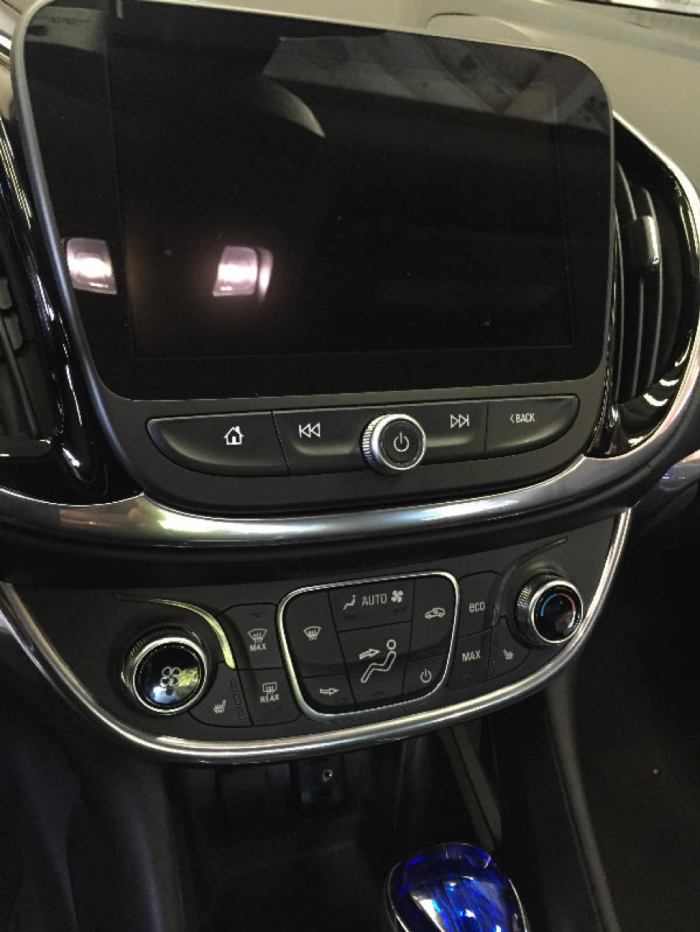 Volt drivers quickly become practiced, even obssessive, about squeezing out every last electric mile possible. For your squeezing pleasure is a new feature, paddles behind the left side of the steering wheel that apply regen braking. This places the drive more deeply into the regen spectrum than driving in “first” gear (EVs don’t really have transmissions). This was a feature originally introduced in the Cadillac ELR.

One of the cautions about driving in “first” is that the brake lights don’t go on and a driver behind a Volt could be surprised by the relatively quick deceleration. The paddles, because the drag is greater, will cause the brake lights to illuminate. One pedal driving is here, if that’s your thing. 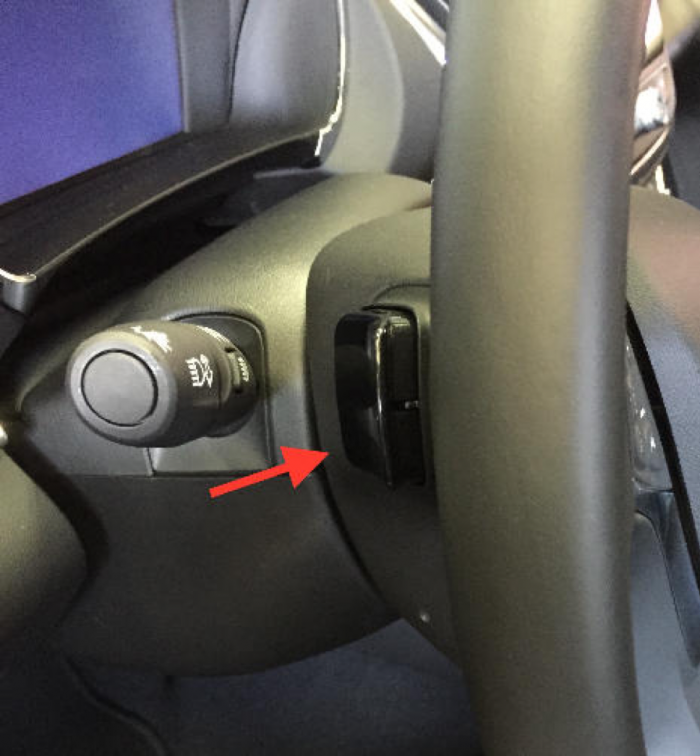 The new Volt comes with sort of a middle rear seat. A (hopefully) limber passenger will need to sit with legs splayed to accommodate the battery pack hump which is still there. It looks like the main difference is the presence of a seat belt. Also, the pass-thru is gone, replaced by 2/3, 1/3 split fold down seats. 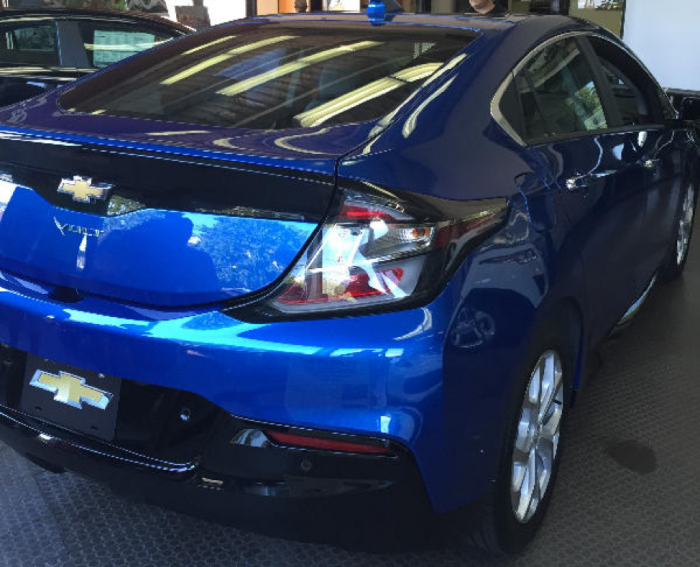 The more heavily raked style tapers down to the rear section of the hatchback, where the configuration of the small trapezoidal window below the spoiler is no longer present.

The Volt remains an innovative design, a hybrid configuration where the gasoline engine acts as a generator for the electric drive unit, and with the greatest electric range of any plug-in hybrid. The Voltarians among us at the meeting approved.