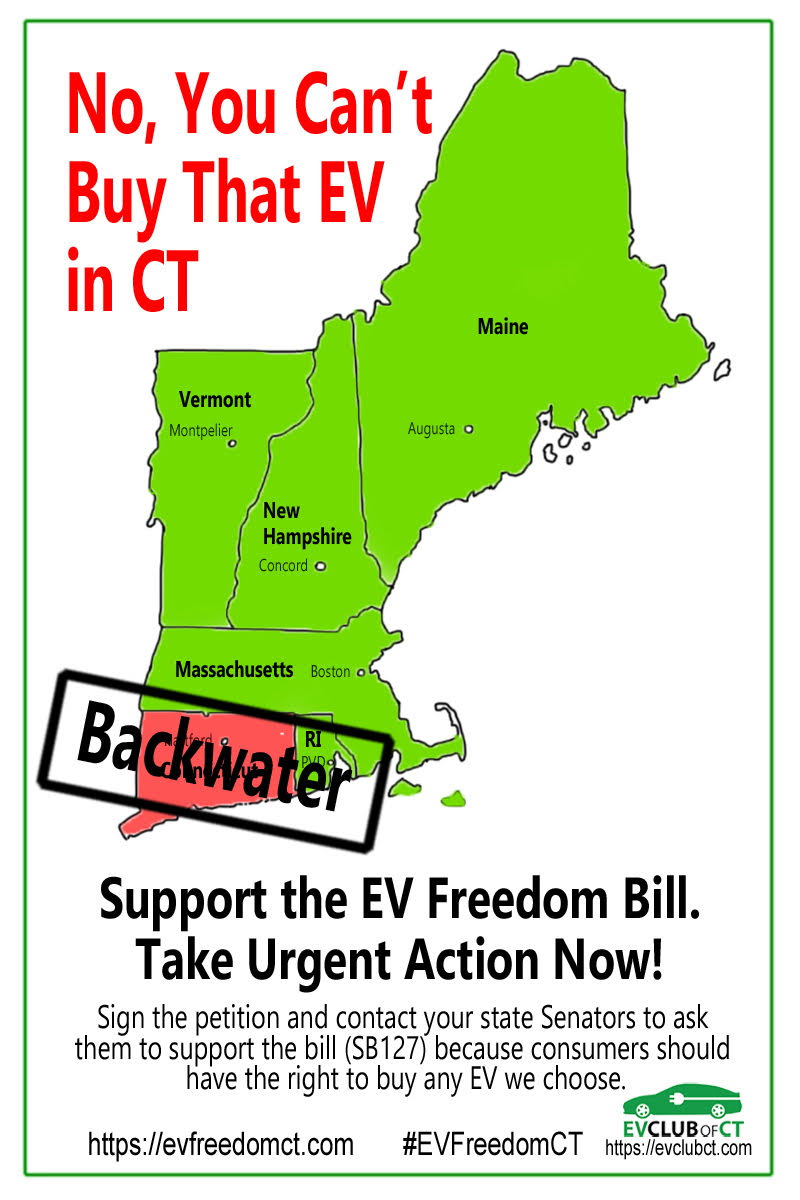 For those following the saga of SB 127, the bill that would enable EV-exclusive manufacturers to open stores in CT, this is a short Fact vs Fiction YouTube video that is worth watching: https://www.youtube.com/watch?v=Ht4avMauknQ
Then go to EVFreedomCT.com and sign the petition.
Myth – Consumers will lose protections.
Fact – Consumer protections are written into state laws other than the franchise laws. These laws apply to any licensed seller and would include direct sellers of EVs since they would have to obtain a license. These include the new car lemon, law, used car lemon law, Magnus and Moss Warranty Act, bonding requirements, and a number of others. The video has a clip of Senator Haskell giving a detailed rundown of these protections.
Myth – Dealers sell EVs
Fact – A few do, most not so much. While it is true that there are a lot of EVs for sale at dealerships, most do a poor job of selling them. In testimony, they exaggerate their effectiveness which can easily be disproved by the data from the DMV and CHEAPR.

Myth – Tesla doesn’t play fair. They have a proprietary charging network and don’t let anyone else use it.

Fact – Tesla should get credit for having the vision to understand that access to charging is an important part of selling electric vehicles. But that said, Tesla has offered to open their network to other manufacturers, as long as these other manufacturers would invest. Any takers?

This Bill is Pro EV and Pro CT

SB 127 permits direct sales from manufacturers that do not have a dealer network. It does not undercut the existing dealer relationships with their affiliated manufacturers. It provides consumers with the ability to buy the EV of their choice and to be able to do so within CT.
We believe in competition and innovation. A recent poll found 83% of CT residents support SB 127. Don’t let CT be a backwater!