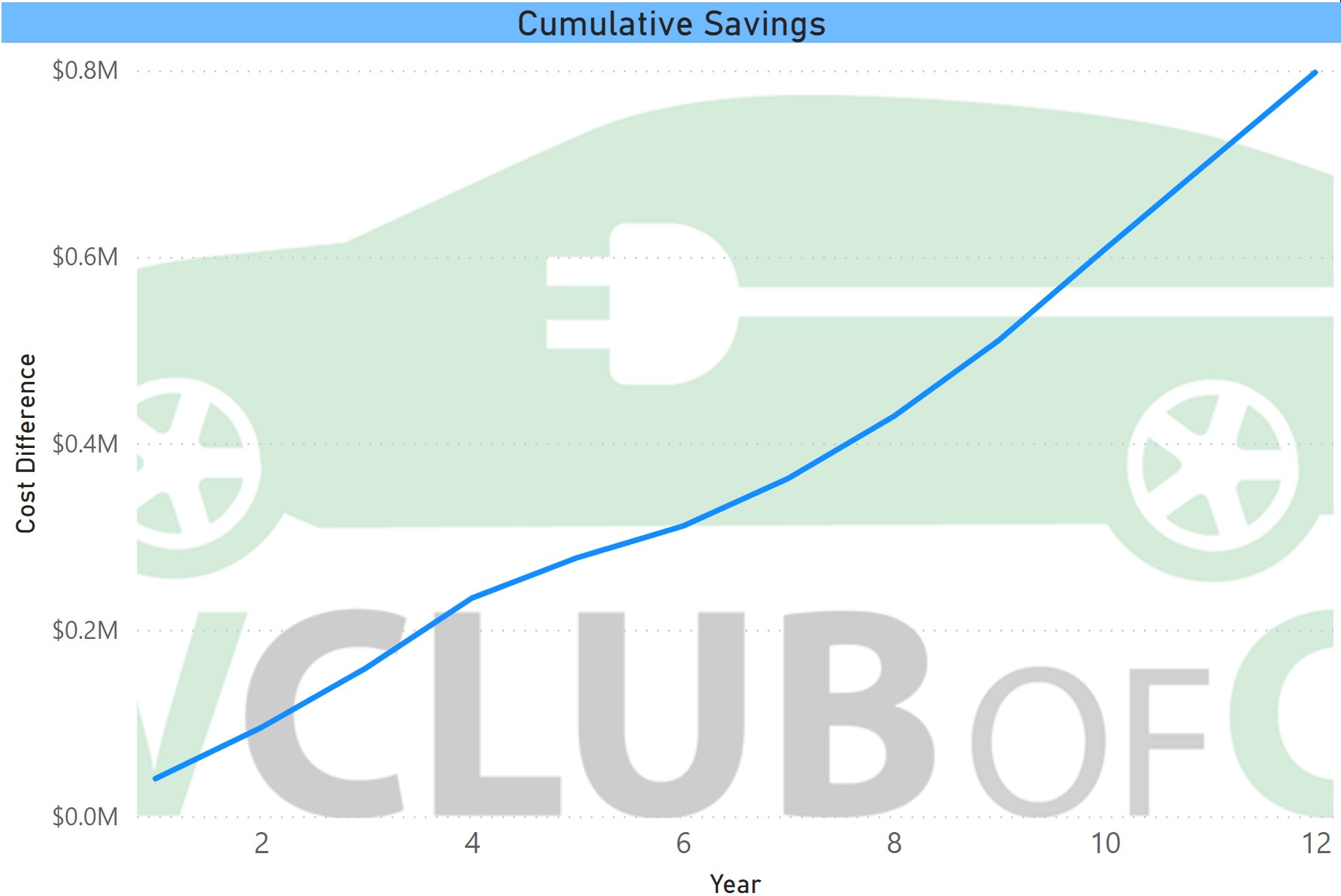 An Opportunity for Large Cuts in Emissions Along With Major Budgetary Savings.

When the Westport Police were doing their diligence in advance of the purchase of a Tesla Model 3 for use as a patrol car, they worked with Sustainable Westport (SW) to run a set of estimates for the payback time period. After running the numbers, they were confident that within 3 years, the purchase premium would be recovered.

The vehicle entered service in February 2020. This spring, the EV Club approached the Westport Police about their interest in doing a deep dive on the financials: purchase, customization, operation, and maintenance. The police shared granular details of costs, including a maintenance schedule, which is the basis for the analysis. The completed analysis showed that full payback happens in year one and considerable savings are realized by year 4.

When I initially started the analysis, my expectation was that the SW numbers were reasonable and we would end up somewhere in that neighborhood. I hadn’t thought the financials would end up being such a slam-dunk with savings of $52,000 over 4 years, enough to buy a new Tesla.

This Tesla Pilot was only a test, but it begs the question: with such strong results, is there any reason not to go all-in for EVs, and forget gradualism?

To help understand what the financial ramifications look like, I used the information I had learned about the Tesla and the Ford Explorer comparison vehicle to model what a transition might look like. This is a general, somewhat macro exercise, and not specific to Westport or anywhere else. I would need more data for that. Nevertheless, I believe it is possible to generate directional numbers with the information at hand. The scenario, which is for a fleet of 12 vehicles, is obviously not New York City, but the basic findings wouldn’t change if it were larger.

The chart at the top of the post depicts the cumulative savings in this hypothetical example of 12 patrol cars over 12 years with staggered turnover. It comes in just a whisker short of $800,000. The charts below show the cumulative cost lines by year for each scenario. The charts for the fixed costs are calculated on an amortized basis with fixed costs divided by the respective service life of each vehicle. 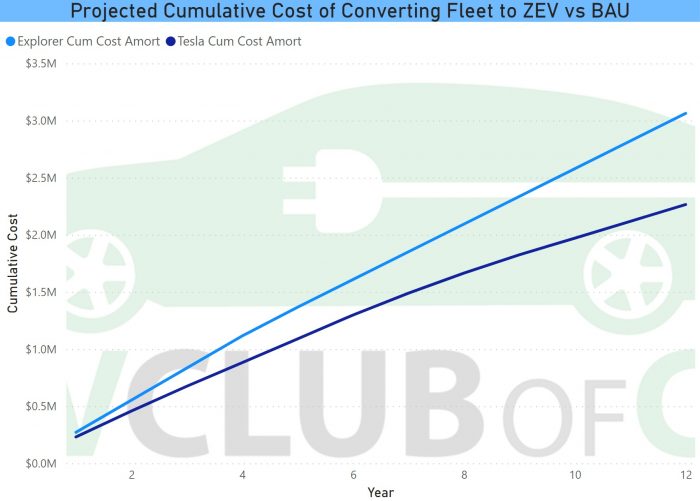 The three charts below break this up into the 3 categories of expense: acquisition, customization, and ongoing costs (fuel and maintenance).

Acquisition – This chart illustrates cumulative acquisition costs. Keep in mind that acquisition is staggered as neither scenario does envisions retiring vehicles before their normal service life ends. The cost curve slightly favors Tesla because, on an amortized basis, the annual cost of a Tesla is slightly lower. The longer this comparison is extended, the greater the differential would be. 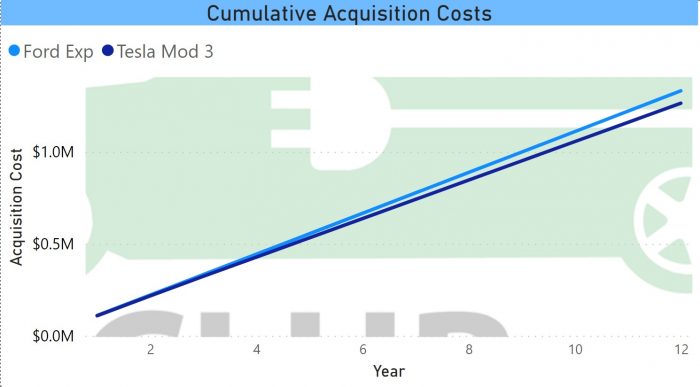 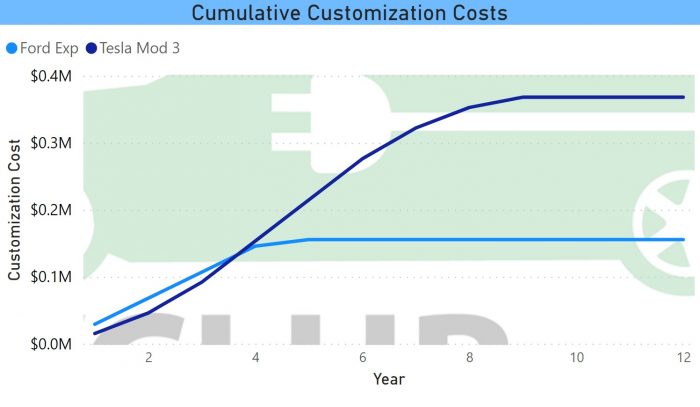 Ongoing Costs – As we saw in the earlier Model 3 patrol car analysis, there are large savings in fuel and maintenance for an EV. Electricity is more efficient than gasoline and these vehicles need much less maintenance. This category saves around $940,000. 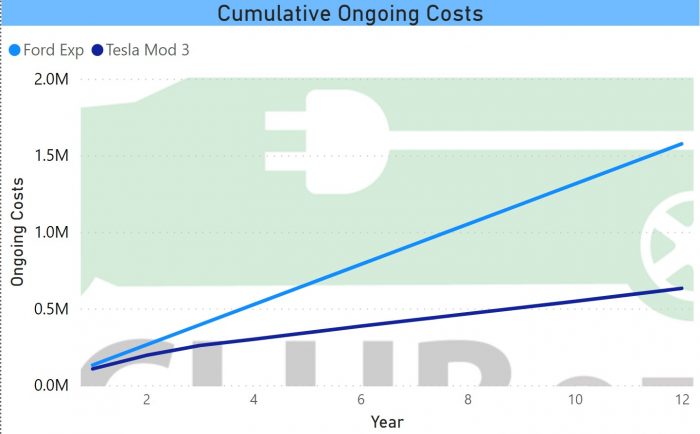 This makes manifest the ramifications inherent in the Westport Analysis. There are major savings to be had. This is not to underestimate the complexities of the budget process and the need to deal with upfront acquisition costs. However, as noted in the earlier analysis, the upfront purchase premium is recovered within one year, so it isn’t that big a burden.

We have data on the police patrol vehicles, but the same logic applies to other vehicles on the force and for a municipality in general. With savings this substantial, to borrow a Tesla term, it pays to up the pace of acquisition to Ludicrous Mode.

1 thought on “Time for Ludicrous Mode”