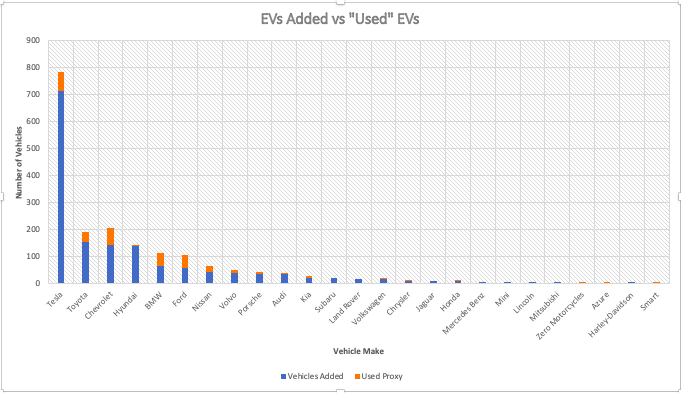 The used car market, in general, is more than double that for new vehicles. That does not appear to be the case for EVs to this point.

CHEAPR, the CT state EV purchase incentive program, is considering offering incentives for purchases of used EVs. This incentive would be limited to lower and middle-income individuals/families. There are a number of changes being considered by CHEAPR, but with respect to used EVs, the legislature specifically authorized this incentive, the proposal was well received by the board, and the public comments were favorable. It seems a lock to happen, though there are below the line development tasks that will cause it to not be available until next year.

What is the State of the Used EV Market

We don’t have access to the data that would enable us to definitively answer this. But we have some information that may be useful for drawing inferences.

During the CHEAPR board meeting of July 17th, there was a presentation by the auto-dealership representatives on the board. They stated that there are few used EVs in the marketplace and the prices were low, creating an unvirtuous circle. They support the incentive and think that that it promises to sufficiently stimulate consumer demand so that dealers will be willing to bid more aggressively at auctions to augment the supply in the state.

The used EV incentive will differ from the new car incentive in that it will also apply to independent used car dealers. Used car dealers do not have to be affiliated with a manufacturer. A Google search for “used EVs for sale in CT” brought up a results page consisting of only independent dealers, mainly large ones like Carvana, Iseecars, and CarGurus. Those companies had both paid and organic listings on this first page of the search results. A search for “used Teslas for sale” brought up a largely similar set of sites, except that Tesla itself appeared, as it is in the business of retailing its own used vehicles. There is another company specializing in used Teslas called OnlyUsedTesla.com.

I suspect that the board members who represent the dealerships are not factoring Tesla into their thinking. For them, EVs are still a niche product and many of the non-Tesla EVs in the used marketplace are the first generation (read: low range) models. (We may be at a point where this is beginning to change as later model EVs are now coming off-lease.) And the dealers, based on the search results and their own words, aren’t making a serious effort to source and sell them. The fact that the independents are spending money on sponsored links indicates that there is at least a minimally viable business. Search is highly targeted and can yield a positive return on a small campaign.

To get some kind of quantification of used EVs relative to new, I went back to the file we recently got from the DMV of all registered EVs in the state as of July 1, just to get an idea of what was entering the market. My proxy for used EVs was vehicles added to the file between January and July with a model year earlier than 2019. This is a rough measure and is reflected in the chart at the top of the post. Each bar represents vehicles added to the file in the first half of the year sorted by make, with the orange portion being those that are categorized as used by our proxy measure. 22% of the EVs added to the file could be characterized as used based on this definition. 47% of the vehicles added are Tesla, but only 10% of those fit this definition of used.

The CSE, DEEP’s consultant for CHEAPR, has been sent back to model new scenarios and we will see what they forecast.