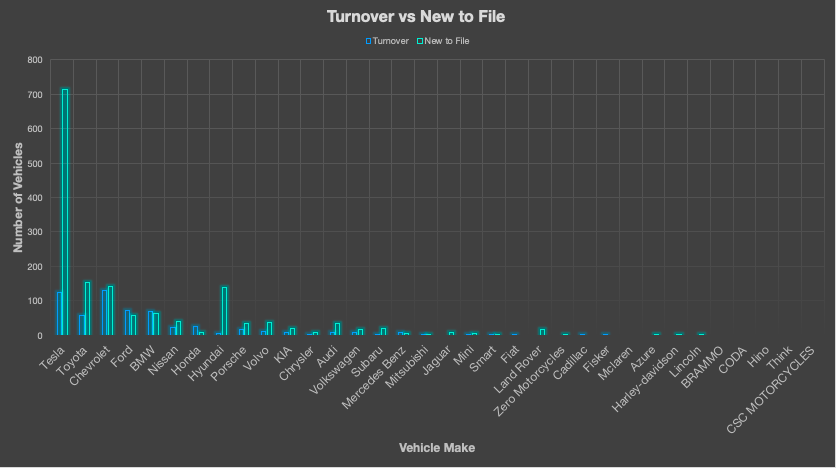 When we build our semi-annual EV dashboard with data sourced from the DMV, we, of course, look at trends by vehicle make. The analysis in this post is intended to give a more focused look at the recent impact of the various EV makes by isolating the vehicles that departed between January and July 2020 and comparing that turnover to the new vehicles added in the most recent July file.

The chart above shows that Tesla has low turnover, coupled with a high number of new vehicles added. That is not a surprising result. When analyzing EV adoption data, the answer to almost every question is “Tesla.” But the impact is seen more starkly in this view compared to the “trends by make” or “waterfall” charts in the dashboard. Since the outsized presence of Tesla tends to overwhelm everything else, it makes it hard to visualize any movement that may exist elsewhere. The answer: show the data without Tesla.

What pops on this chart is the contribution increase from Hyundai. This may be an early signal of a serious EV push, followed this past week by the announcement that Hyundai is spinning off its Ioniq marque into a dedicated EV sub-brand (like Volvo with Polestar) and plans 3 new EV model introductions over the next several years, beginning with a mid-sized crossover in 2021.

Toyota, which has occupied a distant number 2 position over the past couple of years with its Prius Prime PHEV, showed a smaller increase on a lower base.

Ford is going in the opposite direction, with more EV turnover than additions. They have an eagerly anticipated launch in 2021 of the Mach-E, a crossover that bears the iconic Mustang logo.

Audi, Land Rover, and Subaru also spiked, but the numbers were low. Audi showed 9 departures and 34 adds for its new e-Tron. Land Rover, just entering the plug-in world (and separate from the Jaguar iPace), went from having 0 EVs to 16. Subaru had one departure and 19 adds.

1 thought on “Turnover Analysis – What EV Makes Are Moving Adoption”