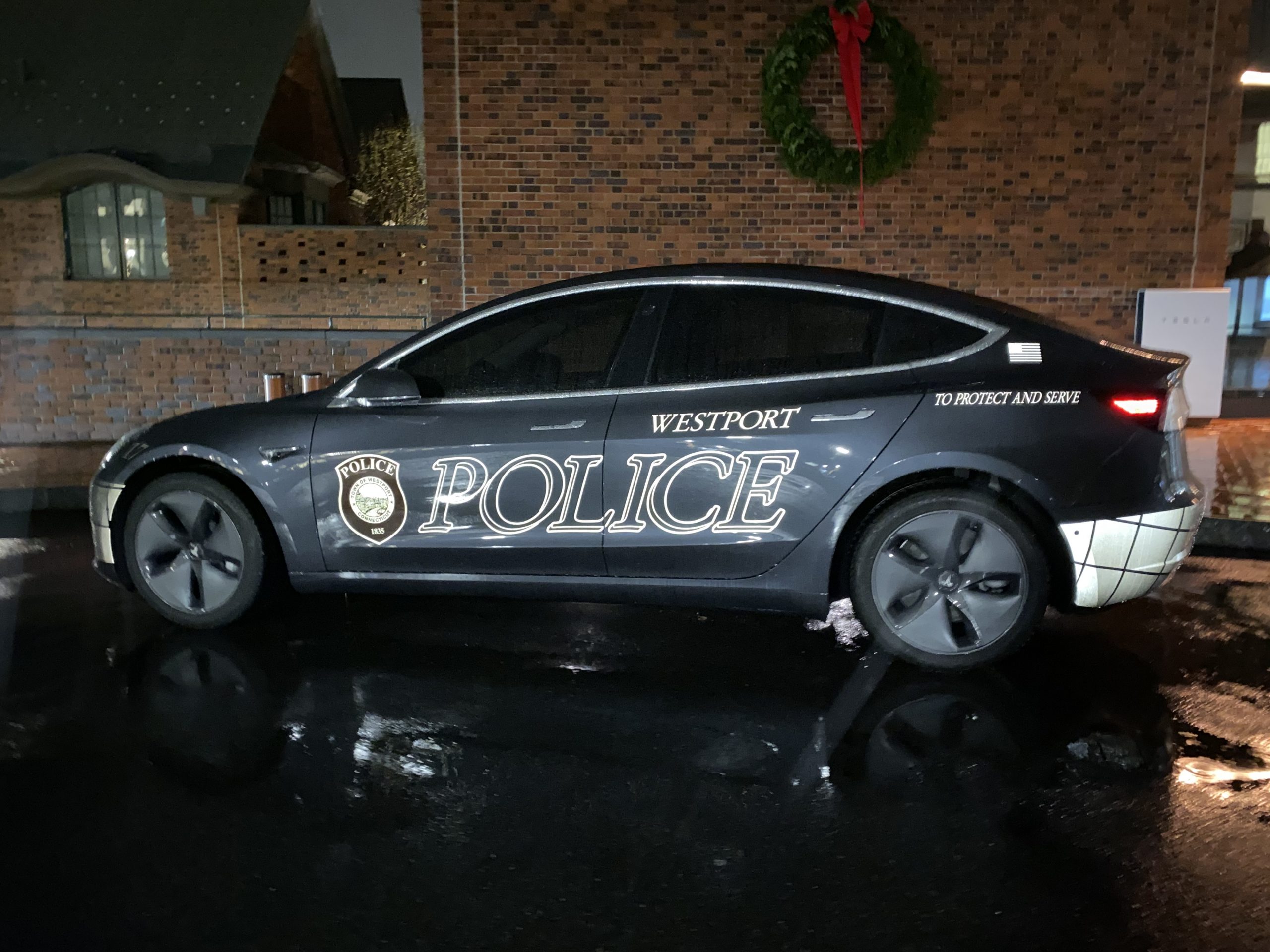 The Westport Police Department has acquired a Tesla Model 3, which was announced by this blog on December 3rd, and via press release on December 10. It caused a bit of a stir locally, but it has also received international attention. The department has received calls from several European countries and Singapore asking about their process, experience, and seeking to follow up as more data are collected over time.

This level of interest may not have been a complete surprise. The PD brought the vehicle to the Connecticut Conference of Municipalities, held at Foxwoods on December 3rd and 4th. It is estimated that between 1500 – 2000 people came up to them, a combination of attendees from other municipalities as well as curious patrons, expressing interest and asking questions.

Westport is the second community to acquire a Model 3 for the police. Bargersville, Indiana was the first, and they posted a message on the WPD Facebook page congratulating them for doubling the number of towns using the vehicle for police work.

The Westport M3, however, is being fully outfitted as a squad car, which was not the case in Bargersville.

WPD is working with Whelen Engineering and Fleet Auto Supply to develop and install the lights, siren, gun rack, and other accoutrements necessary for law enforcement duty. It’s all custom development. Nothing off the shelf fits the M3. These companies are providing their services for free to Westport because they see this as the beginning of a new market. That was not included in the cost-recovery calculations, but it represents significant savings.

That funky material on the rear bumper? It is reflective, widely used in Europe, and a particularly useful safety precaution when a police cruiser is stopped for an emergency in an otherwise active lane of traffic.

All squad cars get outfitted with cameras and computers. But Teslas already come with some serious tech, and better quality than the police would normally buy as an add-on. Part of the learning process with this M3 is how much of that tech can be leveraged. As of this writing, Police Chief Foti Koskinas advises that they are going to be using the Tesla cameras, and the Tesla Fleet Department is working with them because, again, this will only become more widespread. The computer presents a more complicated challenge because there is confidential data from each party that would have to be protected. (We can’t have Tesla seeing INTERPOL alerts!) This is not resolved at this time.

With Tesla’s cooperation, the added features that require power will be wired directly into the Tesla battery. It slightly reduces range, but it is a much more elegant, cheaper, and safer solution than adding an additional 12-volt unit.

It is possible that when it becomes known how much of the Tesla tech can be leveraged that there will be acquisition cost-parity between this vehicle and the Ford Explorer that would have been the default option.

Police officers will be receiving training in the vehicle at Sikorsky Airport. It may be possible for some club-members to observe.

The Potential for State and Municipal Fleets to contribute to GHG Reduction is Enormous.

This vehicle is actually not the first plug-in owned by the department. It also owns a Toyota Prius Prime, a plug-in hybrid that gets about 25 miles of electric range (not used as a patrol car). The PD reports that most of the mileage on the car has been in electric mode, and the vehicle has worked out well.

On the other hand, there is New York City, which already has 2,200 plug-in vehicles in its fleet, avoiding 9,000 metric tons of CO2. All well and good, but Westport has one more police EV than NY. And the EV Club of CT applauds Foti and First Selectman Jim Marpe for taking this step.

There will be an open house in the spring for the public to see the new cruiser and speak to the police. The vehicle will also be brought to Maker Faire.