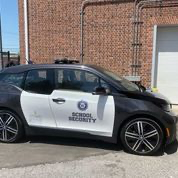 The local police have been rather busy of late with the protests that have been occurring in the wake of George Floyd’s murder at the hands of the Minneapolis PD, and, of course, coping with the stresses of the COVID-19 pandemic.

Not to lose sight of the significance of that, the greening of the municipal police force continues apace. The police department was recently the recipient of a donation of a used BMW i3 from a local resident. It is a 2015 REx model, which translates to an EPA-rated 72 miles of electric range, or up to 150 miles total, including the gasoline range-extender engine.

The vehicle has been customized for its duties and it looks sharp! 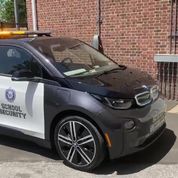 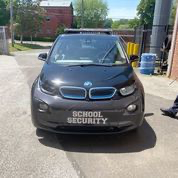 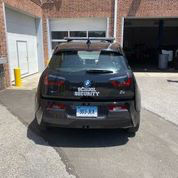 The “bimmer” joins a growing family of green vehicles as the police, part of the town’s push to net-zero, are testing a variety of vehicles for different use cases. This “new” addition is being used for security at Staples High School and adjacent Bedford Middle School, where security duty lasts 8-10 hours per day. It replaces a Ford Taurus that was consuming 6 to 8 gallons of gasoline daily, per Chief of Police Foti Koskinas. If we take an average daily usage of 7 gallons and multiply it by 200 service days per year (per the police), it works out to an estimated 1400 gallons of gasoline and 14 tons of carbon emissions annually. (Source for calculation: NASA)

There is a no-idling rule at Staples. Ironically, the most persistent offender has been the police since the patrol vehicle must remain running while on duty. Now they have emission-free idling running off the battery. When it comes to the police, this is why it is important to focus on gallons of gasoline used or saved rather than just MPG. A police vehicle spends thousands of hours idling over the course of its service life.

The low-speed patrolling around the schools means the electric drive will function at high efficiency.

Daily recharging? No sweat. There are two level-2 charging stations at Staples and the vehicle gets plugged in after hours.

Along with the new arrival, the WPD has a Tesla Model 3 that was customized as a police cruiser and went into service during February, 2 plug-in Toyota Priuses that are used for parking and traffic enforcement at the town’s two Metro-North train stations and downtown, and a Ford Explorer hybrid (not a plug-in hybrid) that was also acquired for cruiser duty this year. Before the Tesla and the hybrid Explorer, the standard vehicle for cruisers was a conventional Ford Explorer. The EPA-rated mileage of the hybrid Explorer is 28 MPG, compared to 16 MPG for the standard version. These 5 environmentally friendly vehicles, which comprise a little less than 10% of the total fleet, will enable the collection of data to refine the department’s approach to future acquisitions.

This blog covered the vehicle entering service in February of this year here and here. There was a planned public press event for when the weather turned warmer, which did not happen due to the pandemic. We have a few updates.

According to Chief Foti, the vehicle has been performing as hoped and he describes the ongoing relationship with Tesla as excellent, crediting them with being very responsive and having a continued willingness to work with the PD in terms of making upgrades.

As previously reported, the Model 3 is already making use of the Tesla cameras. The Tesla lights are incorporated into the police emergency lighting, and all of the accessories requiring electricity are wired into the large battery.

Since we wrote about the vehicle in February, there have been two additional upgrades. The default setting for the headlights is that they turn off one minute after the car turns off. This was not enough for the police. Tesla did some software recoding and the lights now persist longer.

The biggest open question at the time the vehicle was put into service was whether the police would be able to use the computer that is native to the vehicle rather than install their own. This is a complex challenge due to the need to have an airtight firewall between the police databases that would be accessed and Tesla’s proprietary information. It is still a work in progress but there has been one significant development. Working with Tesla, the police have installed stationary radar, which logs directly into the computer. If they get to the point where the Tesla computer can be fully utilized, it would save between $5-$6,000 in customization costs.

The i3 donation was not a planned event, but it wouldn’t have happened had not Chief Foti, the department, and the town administration not demonstrated a vision for how to move the town forward in an environmentally-friendly way (which also happens to save money). The EV Club applauds and supports that vision.