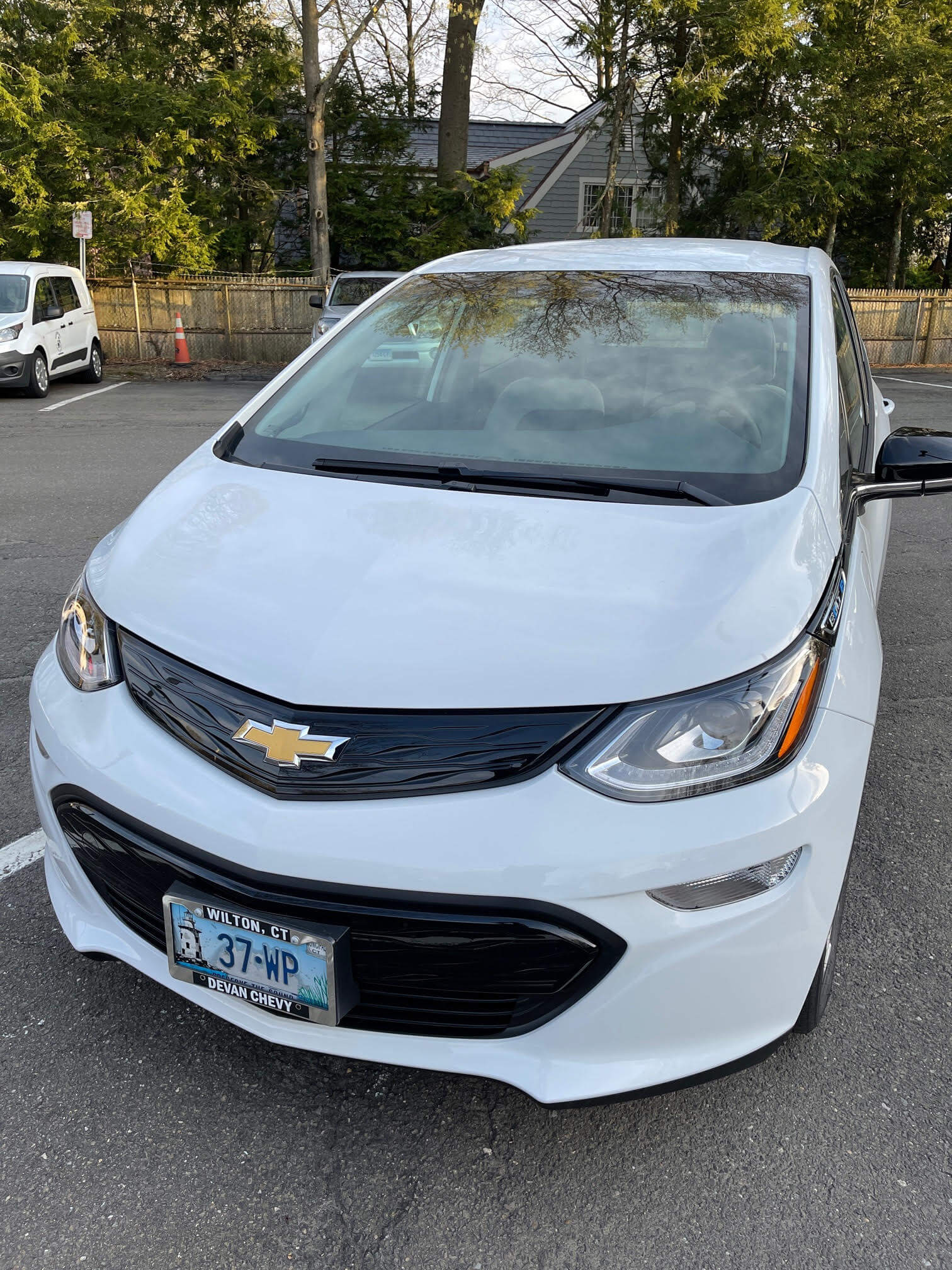 The Chevrolet Bolt recall is inching closer to the one year mark, having started in November of last year. GM expanded the scope of the vehicles being recalled over the course of several stages until in August, it expanded to every Bolt manufactured. That’s the bad news/good news. The recall involves every Bolt, but it hasn’t been a big seller. The irony is that was beginning to change. Since the introduction of the redesigned model this year which came with a lower price, it has been getting traction as one of the better BEV values. Below is the registration trend of the Bolt in CT, compared with its stablemate Volt that was discontinued in 2019. The most recent numbers in the chart are as of July 1, which was before deliveries began of the Bolt EUV. 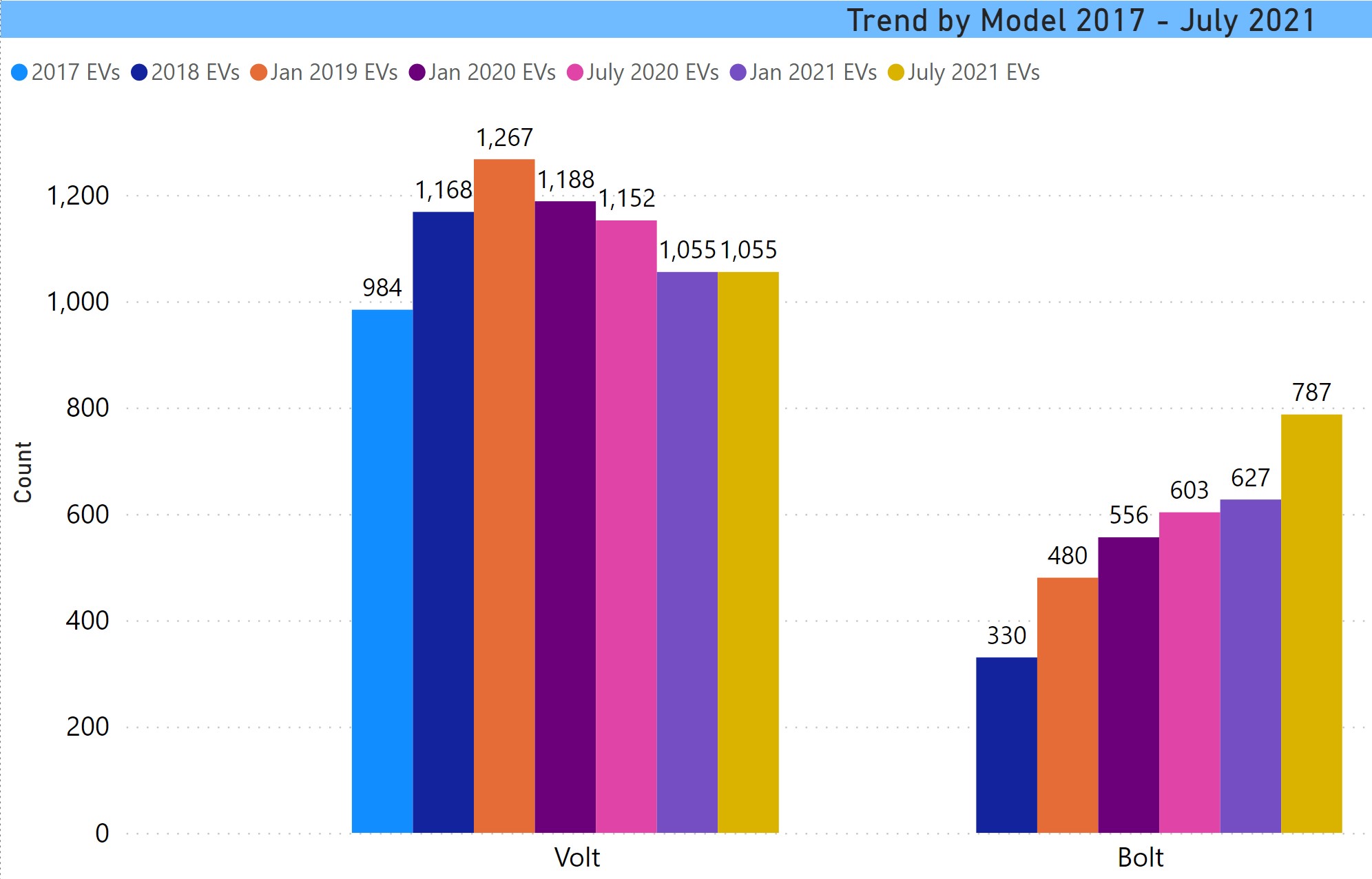 There may finally be a ray of hope. ElectricDrive.com reported that GM has identified the cause and that its supplier, LG Chem, has restarted production lines. New battery cells could be reaching dealers by later this month. It is not known how long it will take to work through the recall backlog as well as the resumption of new vehicle manufacturing. The automaker also announced “new diagnostic software” to be deployed over the next 60 days.

The recall does tell us a couple of things. If you read the ElectricDrive piece, the problem is described as a defect in the manufacturing process. There is more detail than that, but the point is that it isn’t a problem with the battery design or underlying technology. It is strictly quality control. In the article, it specifies that the problem occurred at the LG plant in Korea. But LG opened a plant in Michigan in 2019 and newer Bolts have batteries manufactured at that facility. The fact that GM included Bolts with batteries manufactured in each facility indicates a more across the board concern. (Batteries are very heavy and expensive to ship. It is much more cost-effective to co-locate battery and vehicle manufacturing. The Michigan facility is likely part of how GM was able to lower the price of the refreshed Bolt. Perhaps it provides some measure of hope that there will be a meaningful battery manufacturing presence in this country, a critical national security technology, as opposed to our usual practice of developing technology and then ceding the manufacturing to the Chinese, e.g. solar panels.)

There are a number of Bolt owners among club members. For a variable number of months now, depending upon which recall batch their vehicle is in, they have been living with a vehicle that needs to be garaged outdoors and used in a range-compromised fashion. The Bolt’s 259 mile range is now effectively 163 with the guidance to maintain a battery state of charge of not less than 70 miles and no more than 90%. With this slow-rolling, multi-stage recall, where there is still no definitive no end in sight, how proactively has GM or its Chevy dealers been  communicating with their customers? Bolt owners responded to our query between September 21st and October 4th.

GM has been in a difficult spot, given the expanding scope of the recall, the elusive nature of the cause, and possibly its negotiations to get LG to assume some portion of the liability. Nonetheless, GM and Chevy dealers are responsible to the customers and the general consensus is that there has been a minimal level of communication. The near-silence from GM may be be because it hasn’t had much to say, but there does not seem to be much of a communications strategy in place. The number of communications from GM seems to basically be one, or one per recall if the vehicle was in one of the earlier batches before the full scope of the problem became apparent. The content boils down to, “be patient.” Some owners are frustrated, while others have more equanimity, with GM getting points for proactively expanding the scope of the recall. The dealers don’t seem to be much in the loop. Updates have not been forthcoming as the saga has dragged on. No complimentary loaners have been provided.

Some customers have requested that GM repurchase their vehicle. One advised that there is a YouTube channel called “Wrenching Fool” that provides guidance on how to go about getting a case number. The repurchase requests are being evaluated by GM on a case by case basis and do not appear to have been resolved to this point.

There was one exception to that. Club-member Glen Zackowski reports reaching a favorable repurchase deal with his dealership, Grossman Chevrolet, in Old Saybrook. He will have to wait until the car is fixed. At that point, he will be the owner of a new Bolt EUV. No doubt, staying in the family helped. Customers also report that they like the car. They just wish this process had been made easier for them.