Revisions to the CHEAPR EV purchase incentive program approved in February are going into effect on June 7th. This was announced at the CHEAPR board meeting on June 4th. We don’t really know if there has been much advance outreach to the dealers or not. The announcement felt abrupt so it could be that there will be a bumpy transition for a period of time. The details of the program are described in this earlier blog post written when the changes were announced.

In the meantime, the April update was released on June 5th. The March rebates were restated upward to 170 with April at 119. The Toyota Prius Prime continued as the vehicle with the most rebates at 31, followed by the Toyota RAV4 Prime (20), Chevy Bolt (19), and Tesla Model 3 (18). All other models were in single digits.

The program continues to pace below budget.

The numbers have picked up somewhat recently as the economy recovers. The slide below was shown by DEEP and indicates an upward sloping EV sales trend in CT this year through the first quarter. 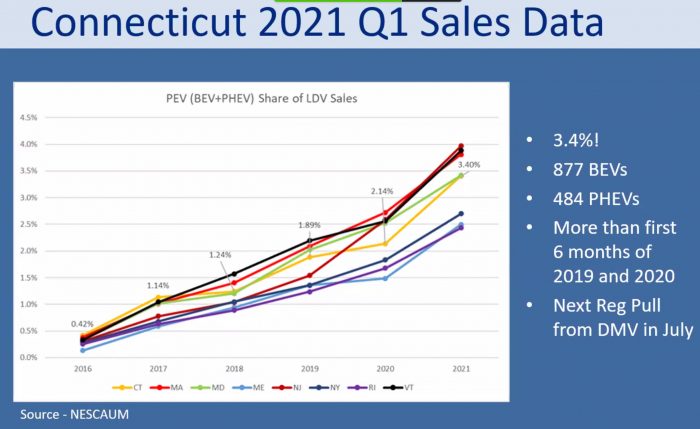 Even with the March spike, the pacing is still below the baseline budget for that month. It remains to be seen if the upturn in the economy and the new rebates will raise the spend level to match the available funds. We may not really know the program’s true run rate for several months. The new LMI incentives are going to require outreach and education, and the process is more complicated. It is likely there won’t be much traction for a while.