The newest version of the Electric Vehicle Interactive Dashboard has arrived.

While the DMV is required by statute to publish the number of EVs in CT every six months, they do not publish any sort of breakdown. It is simply a topline number that can be used to measure the overall progress relative to the goals adopted when the state joined the Multi-state ZEV Action Plan (MZAP). Unless one has the financial wherewithal to subscribe to one of the syndicated research services that process automobile registrations, this is the only place to see the breakdown of electric vehicles in CT.

The Electric Vehicle Club of Ct (EVClubCT) has received files from the Connecticut Department of Motor Vehicles for the past three years, and from this we have developed the Interactive EV Dashboard. This blog post summarizes the findings. At the end of this post is information about how to link directly to the dashboard.

These files have come to us via Freedom of Information Act request, but the timing, the included fields, and format have varied across the years. We work with it as best we can. For example, the file this year did not include fuel type. Even when it did, in 2017 and 2018, the DMV does not have Plug-in Hybrid Vehicles (PHEV) codified as a fuel type. We build that from the model name. The topline numbers published by the DMV do include all EV fuel types, which are Battery Electric Vehicles (BEV), PHEV, and Fuel Cell Electric Vehicles (FCEV).

We have received files from February 2017, March 2018, and January 2019 (actually all vehicles registered as of December 31, 2018). This asynchronous timing, along with our manually applying the fuel type designation, will cause our numbers to be slightly different than the DMV.

The dashboard is simpler this year because we did not receive the city associated with each vehicle, nor did we receive totals to give us a denominator. Consequently, we could not update our analysis by city, county, median income, per capita, and percentage of the fleet. We have make, model, and model year only.

The numbers are based on vehicle registrations. NOT SALES. This is the most often misunderstood point about this exercise. In other words, it is cumulative minus any turnover. Vehicles may have been acquired new or used, purchased or leased. Also, the model year is exactly that, the vehicle model year – not the year in which it was sold.

This blog has published in February that the number of registered EVs grew 78% year over year in 2019. The growth during the 9-month interval covered by the dashboard is 48%. Either number is an improvement over the 35% from the prior year. But the improved growth rate still leaves a big gap between the 9,289 EVs currently registered and the MZAP objective of about 500,000 EVs by 2030. We would need a going forward compounded annual growth rate of about 44% to achieve this level. The growth rate was relatively strong this year with the most significant factor being the pent-up demand for the Model 3. 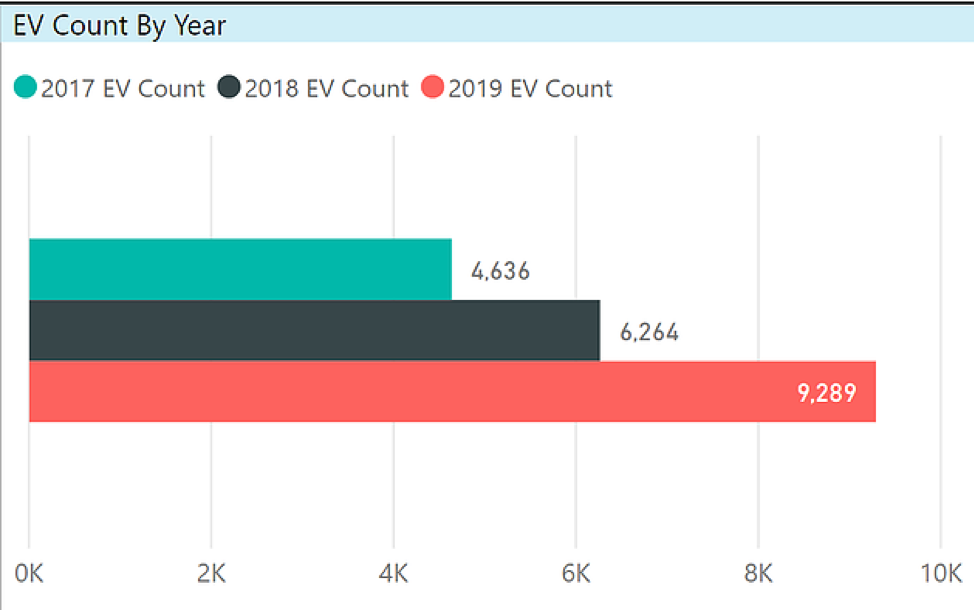 All of the charts below are from the data in the dashboard, which, as earlier noted, use months other than January for 2017 or 2018.

PHEVs are still the more dominant fuel-type. At some point, we assume that BEVs will dominate and we note that General Motors has announced going forward that it will only produce BEVs. But the PHEV is an important transitional power-train. As noted by DEEP at their clean transportation forum on January 30, PHEVs have a big impact on reducing fossil fuels and will be with us for some time until infrastructure and battery technology can overcome range anxiety and limitations.

The first fuel cell vehicles have appeared in the file since we began doing this. There were – wait for it – drum roll — TWO! Both are the Toyota Mirai. Toyota, which is heavily invested in hybrids, seems to also be looking to develop FCEVs rather than BEVs. Their only BEV was the short-lived compliance vehicle BEV version of the RAV4. If you think EV charging infrastructure is inadequate, well, there are currently as many refueling options for FCEVs as there are vehicles. No waiting! When last we checked, there was one in Hartford and one in Wallingford. FCEVs are true zero tailpipe emissions vehicles (and like with electricity, there is a variable carbon footprint depending upon how the hydrogen is manufactured). The CT purchase incentive program, CHEAPR, offers a $5,000 rebate for FCEVs, larger than for the other vehicle types. Though there are complaints about the lack of EV charging stations, it is about the hardware and not the power source, as the grid is ubiquitous. That is the nature of the infrastructure challenge facing hydrogen power, along with the high cost of the cars. 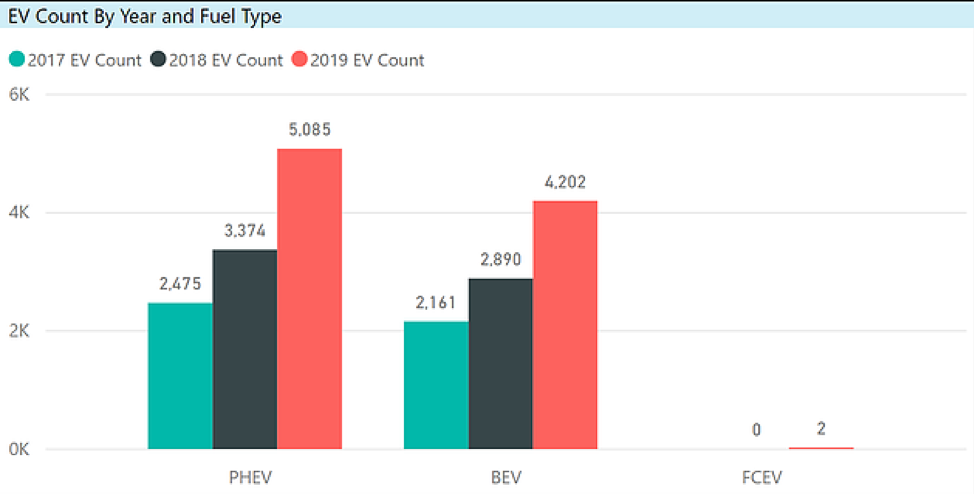 Tesla, despite CT not allowing them to open stores in the state, has widened its lead, increasing from 26% to 31% of all registered EVs. 2,894 of the 9,289 EVs are Tesla. The only two other makes to exceed 10% in share are Chevrolet (19%) and Toyota (17%), with Toyota growing at a faster rate than Chevy. Below is an excerpt of the chart showing the 3-year trend by make, and below that, a donut chart showing the vehicle count as a share of the total. 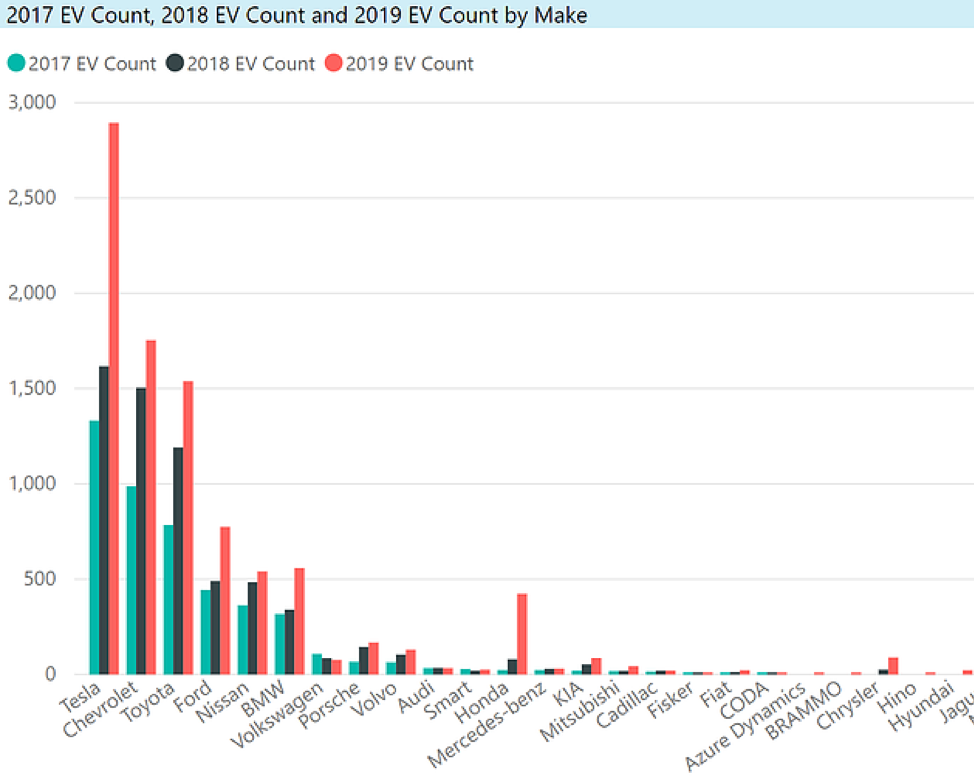 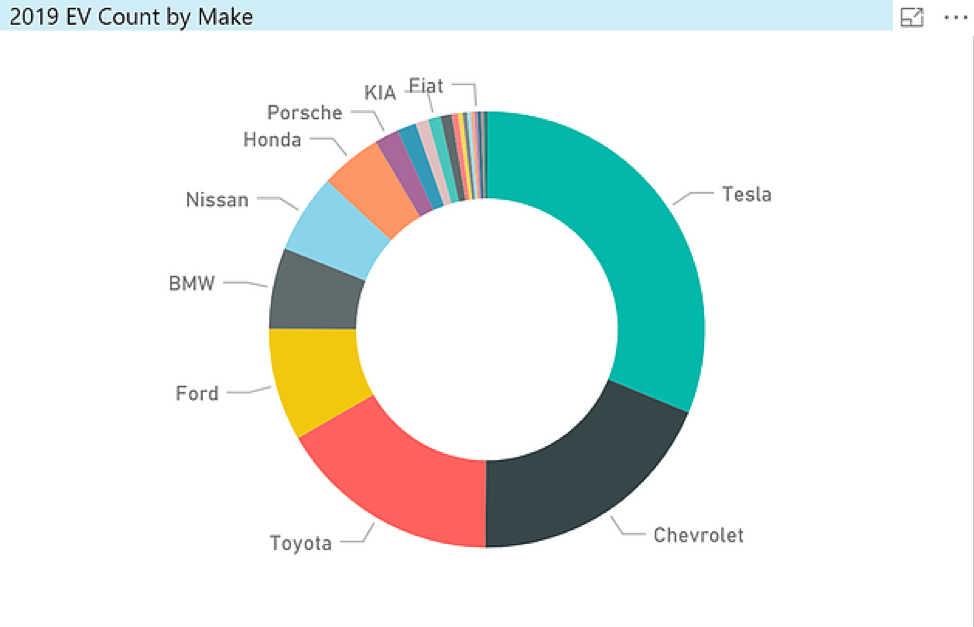 % Of Growth By Make

Tesla was responsible for 42% of the unit growth, followed by Toyota and Honda, both at 11%. The vast majority of automakers were responsible for less than 1% of the growth each. 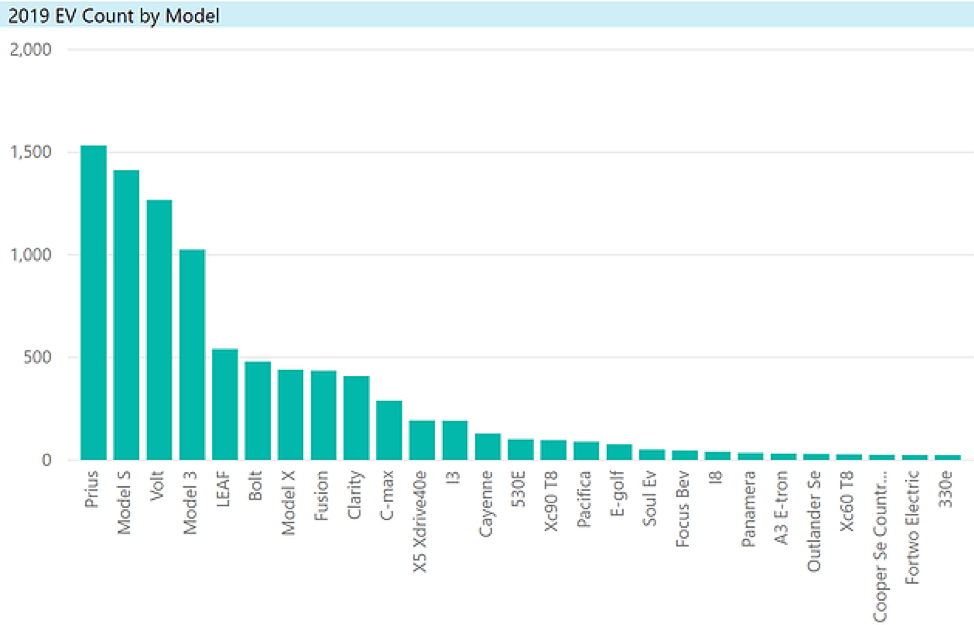 It isn’t surprising that most EVs are of the 2017 and 2018 model years. There were a few 2019 models that sneaked in at the end of the year. If you look at the legend below, you might find it surprising that there is an EV from 1998. It is actually a Ford Ranger. That’s all we know. Is it some one-of-a-kind DIY thing? Or an error in the file (it happens)? We’ll leave it there. 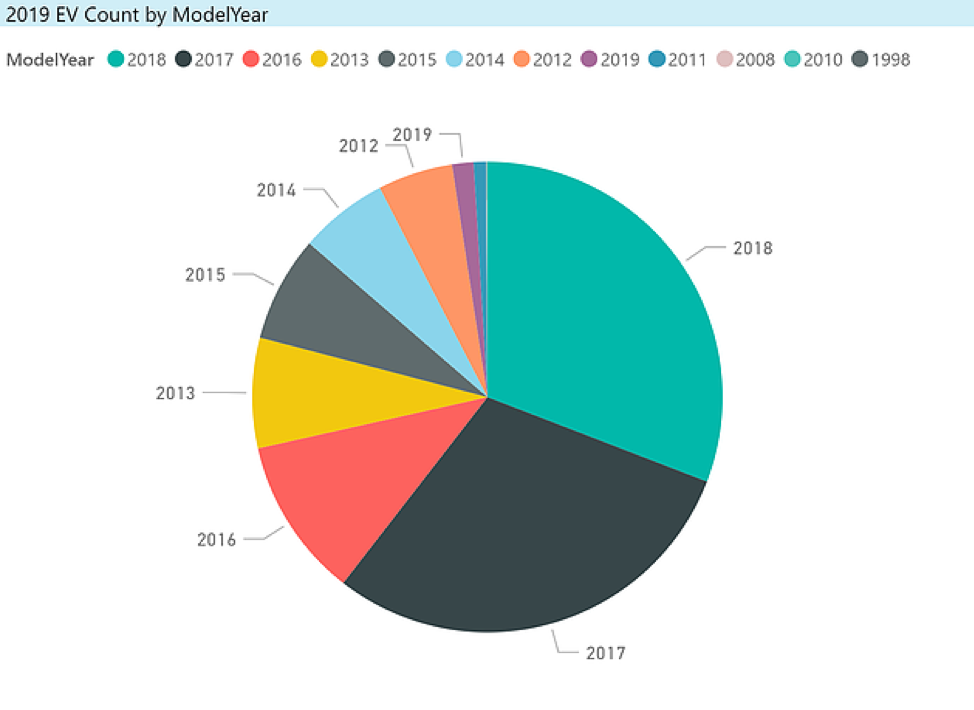 The browser version of the dashboard is available here

There is a Powerpoint, obviously not interactive, of the dashboard visuals downloadable from the home page.