January has generally been a slow month in our tracking of EV purchase incentives, and it continues in the same vein with 68 rebates, per the latest data release from DEEP. The arrow on the above chart indicates when the program parameters were last changed.

With only the base trim level Tesla Model 3 eligible, it nonetheless had the highest number of rebates with 24. This was followed by the Toyota Prius Prime at 11 and the Toyota RAV4 Prime with 10. These were the only vehicles in double digits.

There were 2 rebates for the Honda Clarity, a PHEV that was introduced in 2018 and sold fairly well out of the gate, but which had disappeared off the charts, reportedly due to Honda no longer bringing the car into the state. Net registrations for this model have been declining for the past two years as vehicles are sold or have leases expire and new ones don’t replace them. We had a member send us a copy of his correspondence with a Honda dealer who said that they could not get one for him and suggested buying an Accord (conventional) hybrid instead. Recently, we were alerted by a social media post that this may be changing, so perhaps this is an early indicator.

All January rebates for each model are listed below: 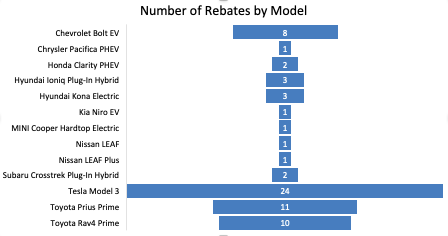 UPDATE: We corresponded with Honda of Westport and it seems the car is indeed returning, backed with a renewed push from Honda.