Steady as She Goes – Rebates Have Plateaued for the Time Being

CHEAPR rebates are up over 50% since the MSRP cap was raised in July. Rebates averaged 74 per month for the first half of the year. Since that time, that has increased to 115. It has been holding steady at that point. October had 111 rebates. September was restated (a common thing) to 118.

There is a CHEAPR board meeting on Dec. 15, so any updates regarding progress on implementation of the new aspects of the program will be communicated in our next update.

Below is the distribution of rebates by model. This is done using the data as it directly comes from CHEAPR. It can be a little unpredictable how they characterize models. For example, there are 22 Toyota RAV4 Prime and 1 Toyota RAV4 Prime Plug in Hybrid SE. I suspect it is just a matter of not handling the data consistently. My preference would be to consolidate the model name. 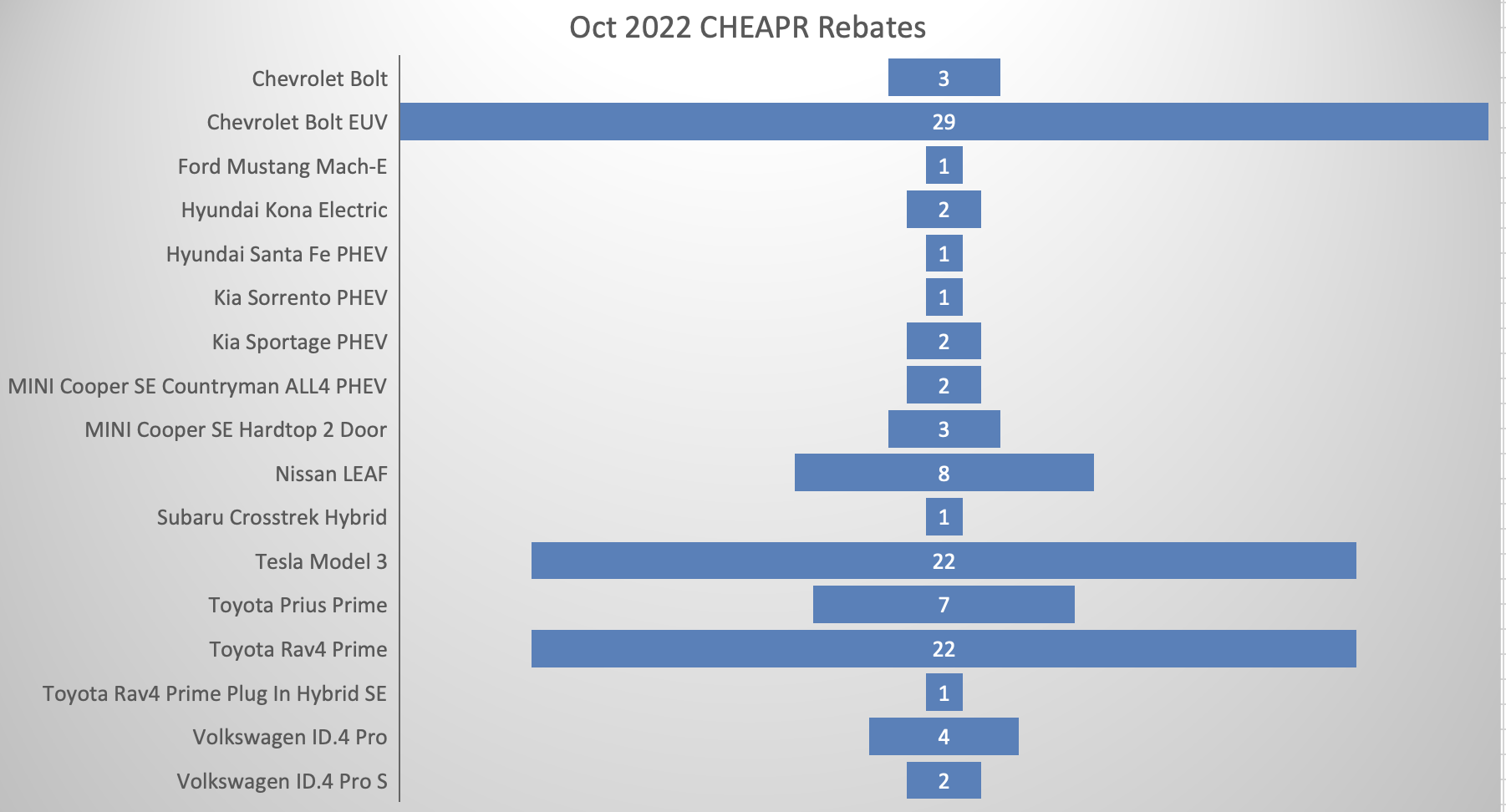 The Toyota RAV4 Prime, which had been the dominant rebated vehicle is no longer alone. Since Chevy emerged from its Bolt battery recall and restarted production, the Bolt numbers have climbed significantly. The EUV version hugely outperforms the original hatchback.

Now that the base model Tesla Model 3 is again eligible, it is a regular high performer, though delivery timing causes the numbers to fluctuate.

The Toyota Prius, once the fuel-efficiency darling of the automotive world has been cannibilized by all manner of plug-in vehicles entering the market. The plug-in version of the Prius, the Prime, has taken a nosedive ever since the RAV4 Prime was unveiled. The RAV4 Prime is, of course, in the popular SUV segment, and it has a longer electric range than the Prius Prime, 42 vs 25 miles. Toyota has announced a refresh of the Prius beginning with the 2024 model year. The PHEV reportedly is going to have an electric range of about 40 miles (this car has not yet been EPA rated).

There were no income-limited rebates awarded in October.

When we have December data, we will update our dealer rebate profile. Look for it in February.