The September data were published on Friday, Oct. 30th, and show 84 rebates awarded with a $104,000 spend. Also, August was restated with rebates increasing from 40 to 44. A restatement of the prior month is common with these data releases.

The base-level trim of the Model 3 can still qualify for a rebate, even under the lowered $42,000 MSRP cap, and when those numbers are up, it raises the overall level. There were 37 Model 3 rebates, followed by 15 from the Chevy Bolt, possibly driven by some significant discounting. The spend level was $104,000, still pacing well under the allocated budget. 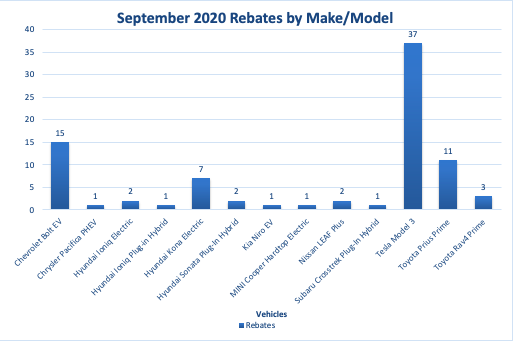 CHEAPR changed the size of the rebates and the MSRP eligibility cap in 2019, which led to a large drop in the number of rebates awarded and the dollar amount spent. This was done at the time out of concern for the possibility of funds running dry late last year. Ever since then, there has been an announcement on the CHEAPR home page that revised rules will be coming in 2020. New rules were finally proposed in July. There was much disagreement about the proposal. Subsequent meetings in August, September, and October failed to resolve differences. No proposal has yet to be brought up for a vote. No meeting date is posted as of Nov 1. The CT EV Coalition does not like the incentive structure as originally proposed.

DEEP has asked their consultant, the CSE to go back and model additional scenarios. There are a number of variables in play, including an income-limited used EV incentive, an income-limited supplemental incentive, temporary stimulus incentive during this period of a weak economy, size of the rebate, and MSRP budget cap. We have blogged about a number of these issues before – here and here most recently. 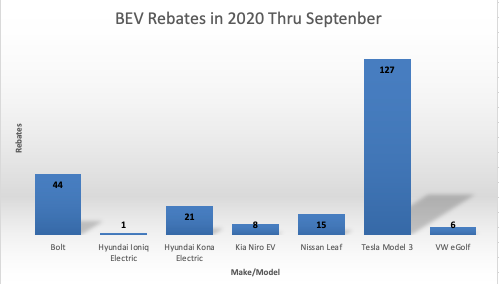 There are only 7 models receiving rebates and just 4 that received more than single digits. If we exclude the Model 3 as our estimates are that ~75-80% of them are not eligible, and the eGolf, which is being discontinued, that leaves only 5 that are eligible, 3 with more than single digits. The eGolf is being replaced with the ID4, which will be ineligible. A loaded Bolt or Leaf Plus will exceed the threshold. The new Ford Mach-E begins at $43K. And, of course, the base trim level of the Tesla Model Y is over $42K. We feel CHEAPR needs to support the new generation of EVs, which include popular SUV or crossover form factors. Let consumer choice dictate where the rebates go and not put a thumb on the scale.