CHEAPR rebates rose to 115 in August, and July was restated to 92, up from 57 in June and the low point for this year in February of 50. There are several models that received rebates that would not have been eligible before the increase in the MSRP. Unfortunately, there were no income-limited (LMI) rebates in August. The revised LMI rules, along with the other program changes that require back-end development, are still a ways away from implementation. It won’t be until next year when all the changes are live. DEEP has published a timeline, but as we get closer and dates become more definitive, we will update.

The presence of the Mustang Mach-E, Tesla Model 3, Hyundai Ioniq 5, and possibly some of the VW ID.4 are the result of the more generous MSRP allowance. The Chevy Bolt is finally making a rebound, and it is the new EUV variation that overwhelmingly dominates in this tranche of rebates. (We don’t know if this is driven by consumer behavior or GM production priorities.) This is the first month in quite a while where the Toyota RAV4 Prime hasn’t been the overwhelmingly dominant model. Another change is that BEVs accounted for a majority (56%) of the rebates. Overall, BEVs, which tend to be more expensive, account for 60% of registered EVs. 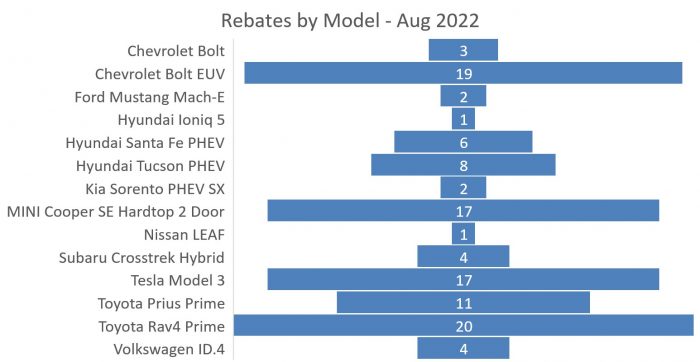 1 thought on “Signs of Life for CHEAPR”