The pace of new EV model introductions has dramatically increased over the past year, but it is still Tesla that is driving the largest share of adoption. In other words, Tesla leads in overall registrations, as expected, but continues to add more EV registrations than anyone else. These are crazy times as consumers and the industry wrestle with the fallout of a war, chip shortage, and disrupted supply chains. We don’t know how the trends will shake out, but for the first time we can really see a broader consumer EV demand across the board.

This is the trend of registrations by top EV makes. There are a relatively small number of companies that account for the bulk of the registrations, followed by a (very) long tail, longer than this static screenshot can accommodate. (An update will be posted to the EV Dashboard, which has the interactivity.)  The chart is ranked by registrations as of July 1, 2022. 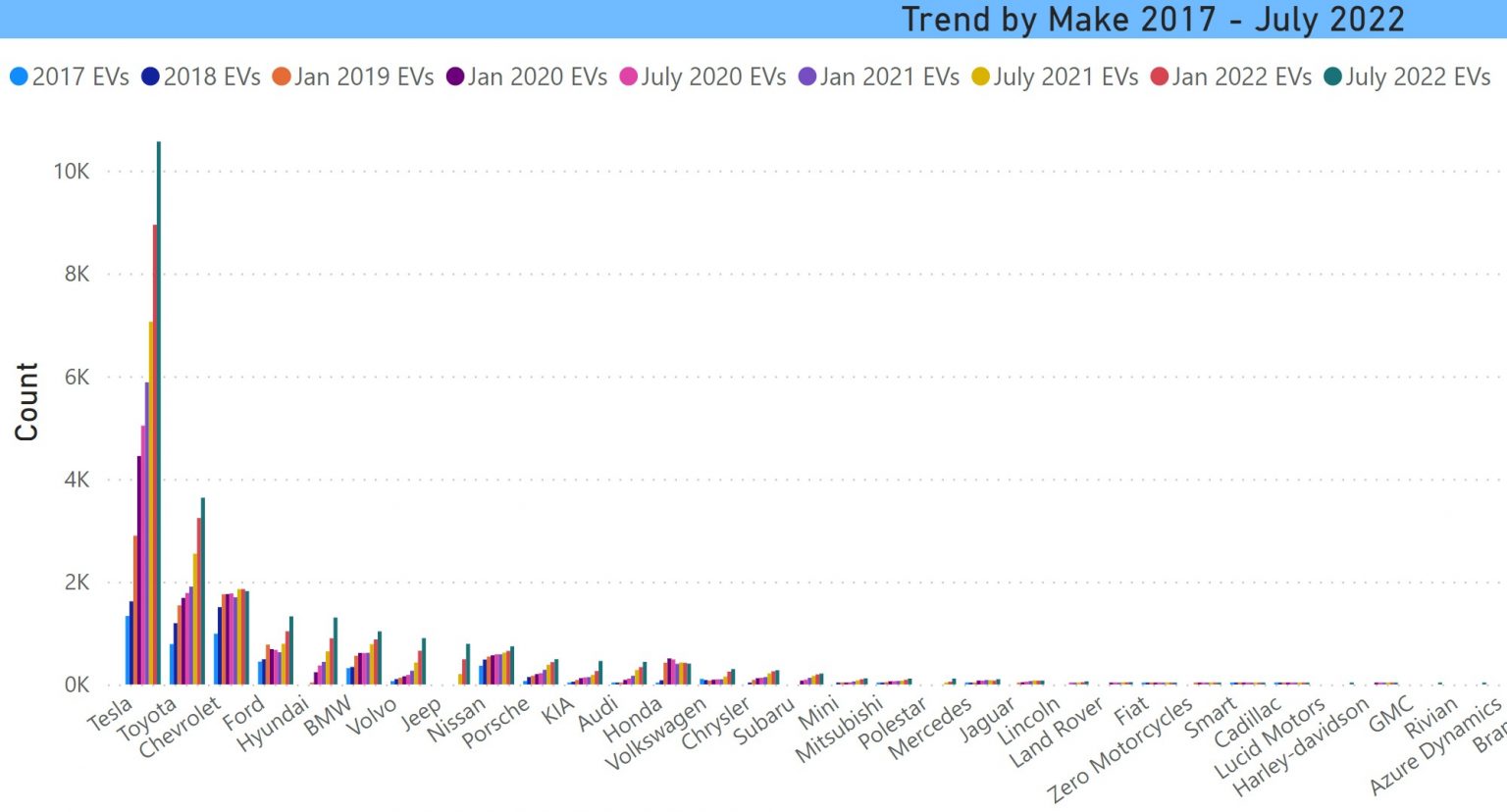 Tesla has pretty much maintained market share. It is responsible for 42% (the same as in January) of all plug-in vehicles and 69% of BEVs, which is down from 71% in January. The movement in the numbers reflects the continuing shift in the market to BEVs. Both pie charts have the same title, but the second one is filtered for BEVs. 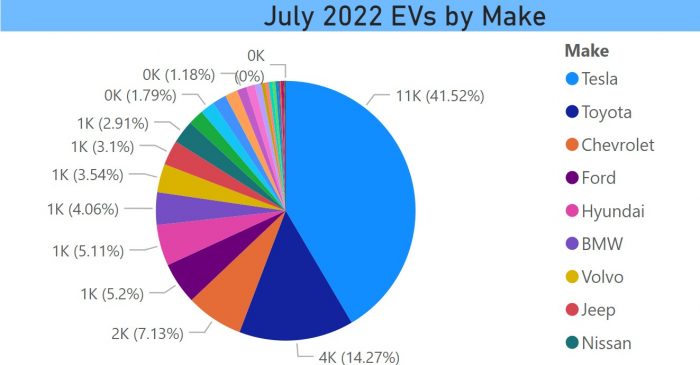 The growth with Tesla was still powered by the Model 3. Even though industry reports indicates the Model Y is the largest selling Tesla model (actually, largest seller among all EVs), there were more Model 3s added to this latest file. It may have to do with this file being net registrations and more trading of the Model 3 as a used vehicle, but even restricting the data to the 2022 model year, the Model 3 still has more registrations than the Model Y. There are now  Tesla added a net additional 3505 registrations and not has a total of 10,564, roughly 3x its nearest competitor.

This chart shows the relative growth contribution of each manufacturer over the past year. 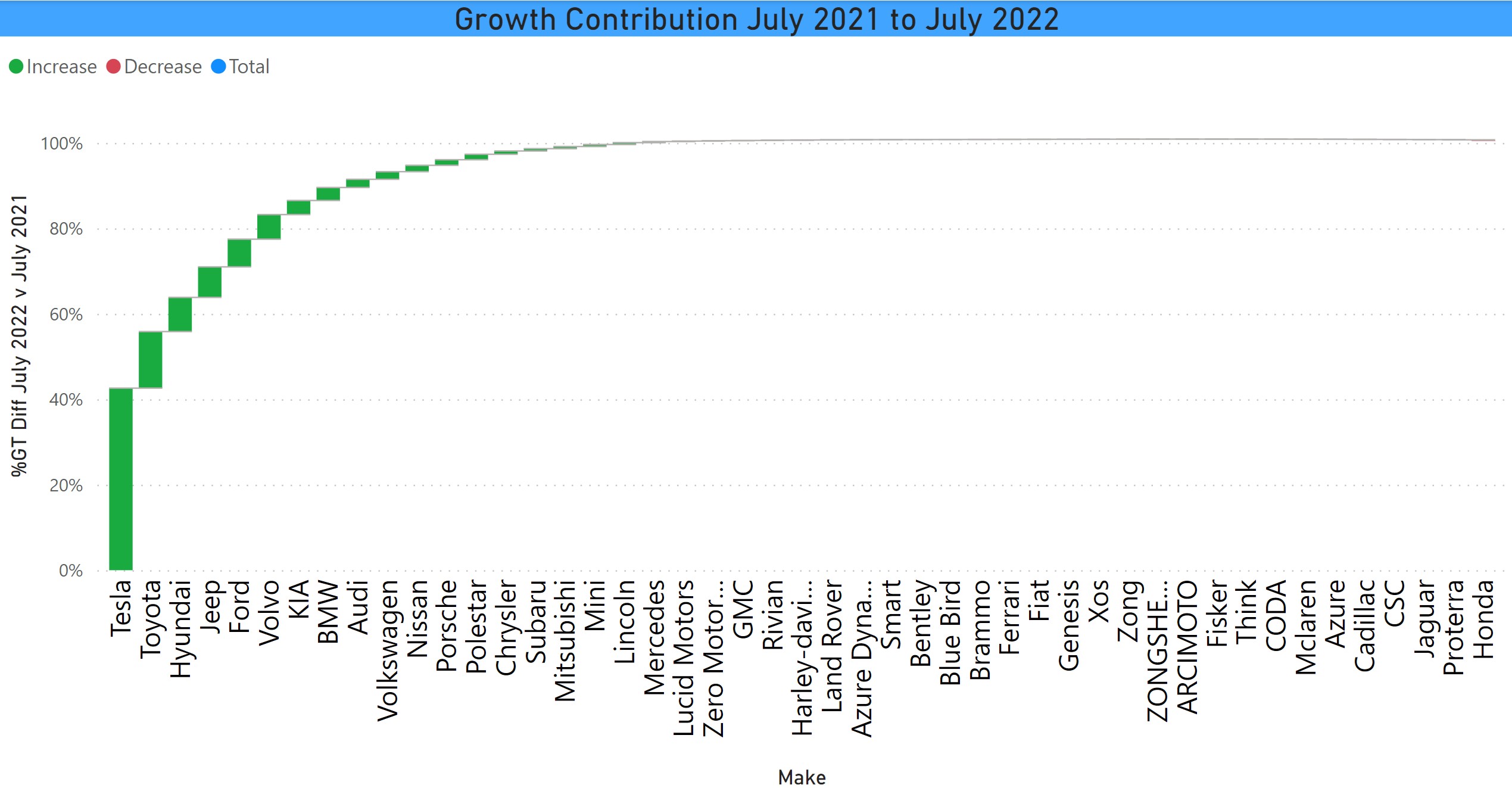 Below are the individual Tesla models.

One of the questions we get is which new models are appearing in our data. This is an arbitrary selection of some newer models. Some were introduced more recently than others and many are back-ordered. Can you spell “s-u-p-p-l-y c-h-a-i-n?”

The second most widely registered make is Toyota, which has surpassed GM a few years ago and has grown its lead with the successful RAV4 Prime PHEV. That model appears to have taken share from its Prius stablemate. The new BEV, the bz4X, does not appear in the file. Included are 6 Mirai fuel cell vehicles and the discontinued compliance car, the BEV RAV 4. There are 3632 Toyotas.

Chevy follows next, having slipped from second to third. With Volt sales having been discontinued in 2019 and the prolonged, extensive Bolt recall, Chevy has been flat for a while, and actually slightly down from January. Its total is 1815.

In fourth position is Ford, which is on a growth curve with 2 successful, though supply-constrained, BEVs in the Mustang Mach-E and the F-150 Lightning. Very few of the latter have been delivered. The Ford total is now 1324. Ford looks to be positioned for the strongest non-Tesla growth if they can ramp deliveries.

The only other manufacturer with over 1,000 registrations is BMW at 1032. BMW has always had a large number of plug in models produced, but the X5 PHEV is the first one to get noticeable traction. Their new BEV models, the i4 and iX, have not made an impact as yet.

Volvo, Jeep, and Nissan have between 500 and 1000 registered EVs. Then the tail gets long with 31 makes represented among the population of registered EVs. In future posts, we will examine how we are pacing relative to goals, along with the geographic patterns across the state.