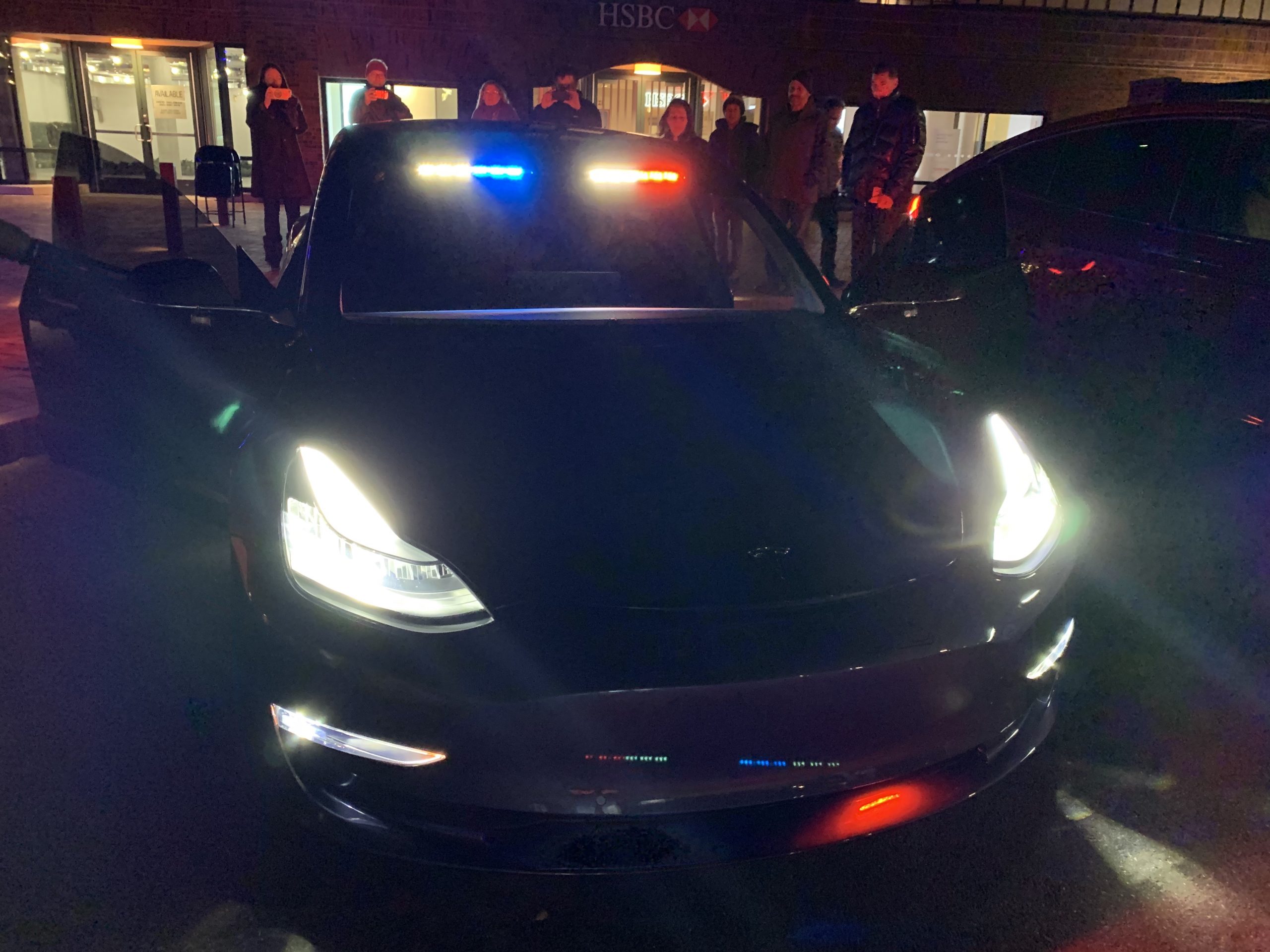 Westport Chief of Police Foti Koskinas brought the new, fully customized Tesla Model 3 police vehicle to the EV Club meeting this week to exhibit to a group of roughly 30 attendees. He applauded the support the police received from First Selectman Jim Marpe, Sustainable Westport, the EV Club of CT, and many residents. This car is a tangible step toward the town’s objective of reaching net-zero emissions by 2050.

The police department continues to field inquiries about their experience and process to this point from countries all over the world. The chief referenced recent inquiries from Istanbul, Turkey, and New Zealand. 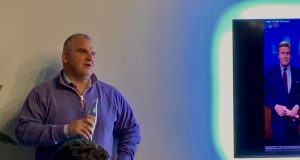 Chief Foti is shown here speaking to the club. He is drinking Pepsi, folks, although he has also drunk the Kool-Aid as evident in his enthusiasm about the Model 3. The vehicle has only been in service for two weeks, which is not much time to gather data, but Foti told the crowd that it is performing as advertised. He looks forward to gathering more data as the department accumulates more experience with it to further analyze the use case.

A police vehicle is normally kept for around 120,000 miles. But those are driving miles and the vehicle will have spent 30,000 hours idling during its time in use. In the stories about the Tesla acquisition that have been published in various outlets, some commenters expressed negative sentiment about police spending time idling in general. For the record, it is required. The computer needs to be kept running, and the officers have to be in a position to respond instantaneously. The combination of the driving and idling equates to 300,000 driving miles, per Chief Foti. The police electronic equipment is being wired directly into the 75 kW Tesla battery. Problem solved with respect to emissions, but it is hoped, and we won’t know for a while, that the Tesla will have a longer service life. Tesla is monitoring the battery and advises the police to expect 1% to 1.5% diminishment per year, meaning the vehicle can remain in service a long time without worrying about a battery that becomes meaningfully compromised.

Chief Foti also discussed how the mileage stats that are on paper about a car don’t mean a lot with respect to actual performance. The 16 MPG that is the rated performance of the Ford Explorers is closer to 8 – 10 MPG due to the nature of its use for police work. But, that said, and in the service of gathering data, the department is also working with Ford to test a conventional hybrid Explorer police vehicle. The hybrid would see a gain in rated mileage from 16 to 28 MPG, and would somewhat mitigate the use of the engine while idling.

The Model 3 is not the department’s first experience with a plug-in vehicle. It owns two plug-in Priuses, which are used for parking enforcement and mostly run in electric mode.

The Model 3 has been deployed to traffic, where its ability to accelerate quickly from a standing start is valuable from the perspective of officer and public safety, described in more detail in an earlier post here. Chief Foti put more specific numbers to it at the meeting.  The police Model 3 will go from 0 to 60 in 3.2 seconds. The faster the police vehicle can accelerate to overtake a speeder and the shorter the distance to catch up to the offender, the lower the risk. Describing the safety issue as “huge,” he states that he may only have to drive at 65 MPH with the Tesla instead of 85 MPH, and travel two-tenths of a mile rather than six or seven-tenths of a mile.

Traffic is a big issue locally. There is plenty of it. The department receives numerous complaints of dangerous driving from residents. Chief Foti described Westport as a “cut-through” town, given that  I-95 and the Merritt Parkway cross the town, not to mention Route 1 and the two train stations. When there is a backup (which happens all the time), the map apps direct traffic onto local roads. There is a lot of speeding, distracted driving, and incivility.

The Model 3 is being used for either one or two shifts per day, every day. Even if the car has been on duty for 16 hours, there is still plenty of time overnight to fully recharge the battery.

This particular patrol car is not a “black and white.” It is dark gray with police decals, a design that “doesn’t stick out until you want it to stick out.”

Whelen engineering developed a lot of custom equipment for this car due to its being the first of its kind project. They didn’t charge the town since they view it as a pilot. In order to show their work to other prospective municipal customers, they have purchased their own vehicle. They spent about 200 hours working on this customization, but once this is in regular production, that is expected to be reduced by 80 to 90 percent. This vendor already has another order, though it is for a fire chief’s car. 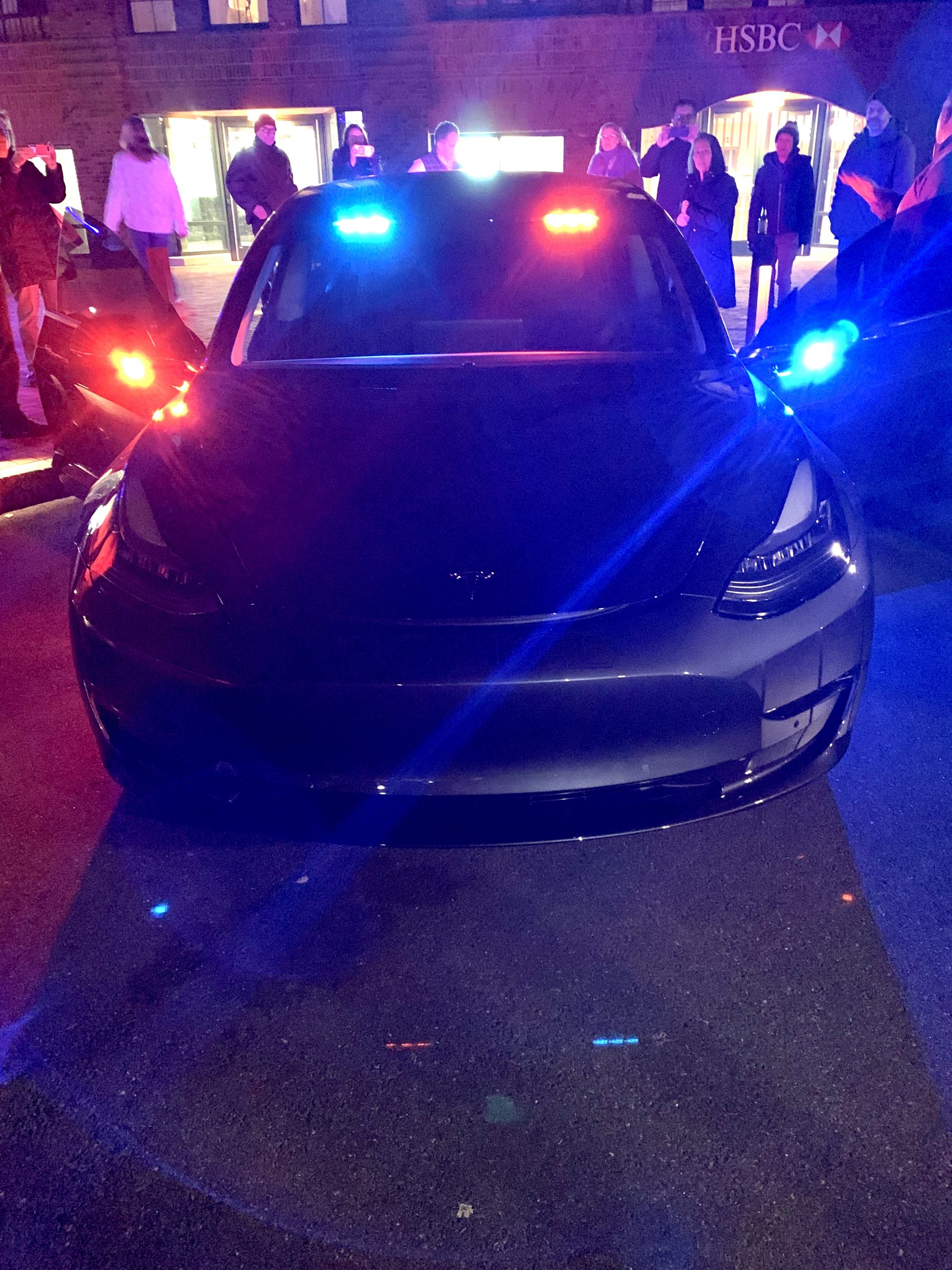 The Tesla wasn’t the only interesting vehicle to make an appearance. Club member Joe Stroll brought his gold BMW i8 Cabriolet. 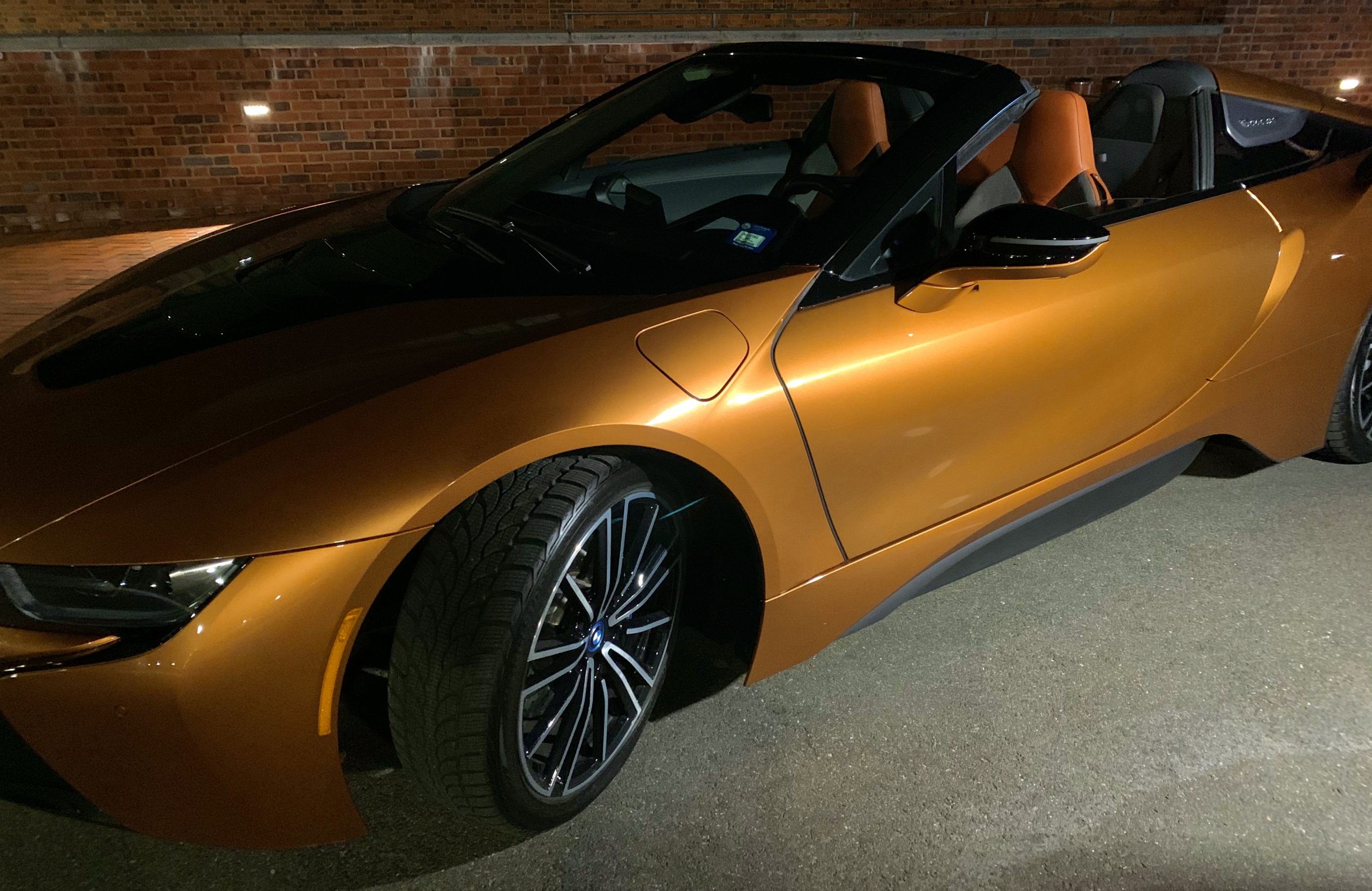