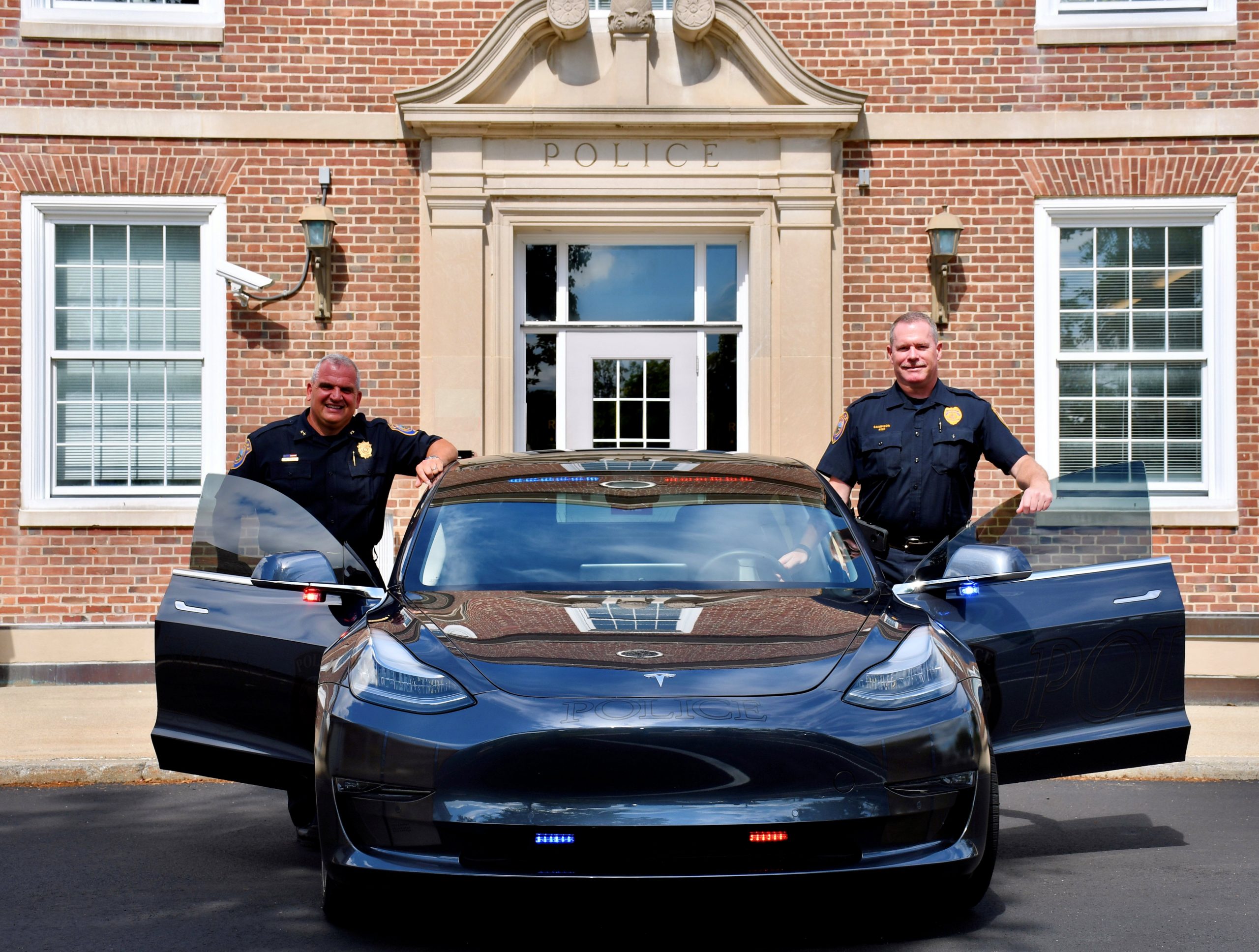 This blog post will discuss the financial aspects of the analysis. A subsequent post will describe the avoided emissions and health costs.

Using a Tesla Model 3 for police duty was a new idea back in Dec. 2019 when the Westport Police acquired one for use as a fully customized police cruiser, going into service in Feb. 2020. This was the second Model 3 to be acquired by a police force (Bargersville, IN was the first), but according to the Westport Police, this was the first one to be fully tricked out for law enforcement. The Model S or X would also be cool patrol cars, but the lower price-point of the Model 3 made it a more financially realistic option.

The purchase caused quite a splash, generating hundreds of inquiries from all over the world. Since then, there have been some other communities that have gone the same route. To the best of our knowledge, nobody has published a dive into the financials, including the customization.

The police gave us some very positive feedback early on about using the vehicle. This included how its performance enables it to catch up to a speeding vehicle in less time than a gas-powered patrol car, reducing the danger to other motorists, pedestrians, and the police themselves.

When a police vehicle is out in the community, especially at a public gathering, photo ops are common. The usual photo op is with the kids, who like to be photographed behind the wheel of a patrol car. With this car, it is the adults asking for photos.

When the purchase announcement was made, much of the attention was focused on the headline purchase price. Sure, the Tesla Model 3 is green. In fact, it is green even by EV standards with a 121 MPGe EPA rating. But is it a prudent use of taxpayer funds to purchase a vehicle costing $52,290 compared to $37,000 for a Ford Explorer, the recent mainstay of the Westport patrol car fleet?

This blog reported extensively on the vehicle when it entered service. The story was picked up in other places, too, including local blogger, Dan Woog, who published a story in December 2019 that generated over 50 comments. Most were supportive, but there were doubting Thomases who wrote, “$52,000 – what a joke.” Or “A Tesla is essentially a luxury item and a novelty; what a wasteful and obnoxious mismanagement of our tax dollars.”

While EVs are typically more expensive to acquire than a comparable conventional, or ICE (internal combustion engine) car, the total cost of ownership, which factors in fuel and maintenance, is often lower. The Westport Police worked with Sustainable Westport before the purchase to estimate the numbers and there was a high confidence level that the lower operating costs of the Tesla would translate to payback within three years, plus the tantalizing possibility that the native tech in the Tesla would offer savings on the extensive customization that occurs for a law enforcement vehicle. Fortunately, Westport leadership is committed to lowering emissions and they, including First Selectman Jim Marpe and Police Chief Foti Koskinas, had a bias to action.

The new headline is that the payback happens in year one. By year four, there are enough savings to buy a new Tesla. The details get a little more complicated and I will lay them all out. All data regarding the purchase, customization, and operating expenses come from the Westport Police. At my request, the analysis was reviewed by the Finance Department of the Town of Westport, which has confirmed the accuracy of the data and supports the conclusions.

I use actual data, where available, and due to the relatively short time frame, projections based on the data for future years, done in consultation with the police.

This Tesla and The Next

This car was never not going to save money.  The cost of law enforcement customization is substantial, more than the cost of the Ford Explorer. The Tesla, due to its first-mover status, was given significant discounts from the two companies that Westport uses for this work (Whelen Engineering and Fleet Auto Body, which are both CT companies). Going forward, that free lunch is off the menu. Consequently, when discussing the data, I refer to this vehicle as the Tesla “Pilot,” and a second, hypothetical vehicle, as the Tesla “Next,” where I don’t count the one-time discounts to have a better comparison with the Ford ICE.

Also, this comparison assumes outfitting a car from the ground up. In real-life operations, if a vehicle is replaced with a like vehicle, much of the customization can be reused. The Westport patrol fleet is made up of Ford Explorers and Crown Victorias. The latter model has been discontinued so reuse is not possible when replacing those.

This Model 3 was the long-range, all-wheel drive, performance version. The police did not purchase full-self driving (which their insurer would not underwrite, though it was moot because they weren’t going to buy it anyway).

The biggest single item in the customization is the license plate reader, and it is here that there was a savings of $10,000 ($8,000 vs $18,000) due to taking advantage of the technology native to the Tesla. As far as Pilot discounts, there was no charge for added cameras, lights, siren, and the weapons rack. These discounts amounted to just over $14,000.

The Pilot was not outfitted with a prisoner transport cage/partition since that was not needed for its duties. For purposes of comparison with the Explorer, the partition was included in the Next vehicle.

There are two items that applied only to the Tesla. One is a spare tire for $800. (The Ford comes with a spare.) The other is a charging station at a cost of $1000 for hardware and installation. These are categorized as “customization” since they come after the vehicle is purchased. The department is getting two shifts per day on a single charge and charging the vehicle overnight. This is assumed to be the usage pattern of future Teslas, so the conservative assumption on charging is that the charging equipment expense will be required for each Tesla procured and it is included in the Next vehicle.

The other item, charged to all cars, was a police computer.

Exploiting the native Tesla tech is still a work in progress. There is the possibility of future savings but for this comparison, no further savings are assumed. The total customization totals for each vehicle are displayed below. The Pilot vehicle, due to the discounts, cost savings from the license plate reader, and lack of a prisoner partition has a $24,600 lower cost of customization. In other words, based on the customization alone, the purchase premium has been more than recouped. The Next vehicle, without all the discounts, still has a lower customization cost than the Ford in the amount of $8200 due to the license plate reader savings, partially offset by the charging station and spare tire expenses. 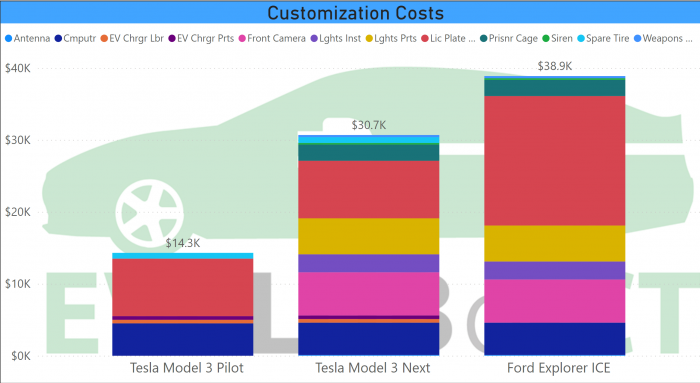 Aside from fuel, these are the ongoing regular maintenance items that are included in the data.

Both vehicles: brakes and tires.

With electric vehicles, regenerative braking, where the engine slows the car and stores some of that kinetic energy in the battery (instead of its being dissipated as heat), greatly reduces the wear on the brakes. The scheduled brake servicing for the Tesla is once every two years. It is possible the brakes will last longer, but the police use involves hard stops, which will engage the friction brakes, and this is thought to be a conservative estimate. Brake servicing history on the Explorer is twice per year.

The police have remarked that they are pleasantly surprised that the tires are holding up better on the Tesla, which they attribute to a superior suspension. They plan to replace the tires once every two years, compared to every year for the Ford. Both vehicles use the same tire.

The costs were calculated based on being driven 23,060 miles in a year.

Tracking of the electricity consumption was a manual affair of tracking mileage and battery state of charge before and after each day. Going forward, the police have subscribed to Tesla-Fi, so there will be an opportunity to tighten those numbers, plus track battery degradation. Based on the data we have, the cost of electricity was 60% less than it was for gas. Also, keep in mind that this car is a 2020 model year, meaning it was before Tesla began installing heat pumps in its vehicles. This will reduce energy consumption in cold weather.

The documented service life of the Ford Explorers is four years. Based on what the police have seen to date, they are planning for a six-year service life for the Model 3. This is big. Costs are calculated on both a cash and amortized basis.

The chart below shows the total cost of each vehicle with subtotals by category (purchase, customization, ongoing) for each of 4 years. This looks at the costs on a cash basis. The costs are cumulative. Since we are looking at the costs on a cash basis, the 2 blue bands, representing the purchase and customization costs, recognize these expenses in the first year and they don’t change. The ongoing cost does increase each year as more fuel is used and additional maintenance items are performed.  The maintenance load on the Ford, in particular, gets heavier as the years go by and things like the catalytic converter and water pump need to be replaced. Therefore, the year 4 cost is the total spent on fuel and maintenance to this point. Four years is the chosen interval as it corresponds to the service life of the Ford Explorer. 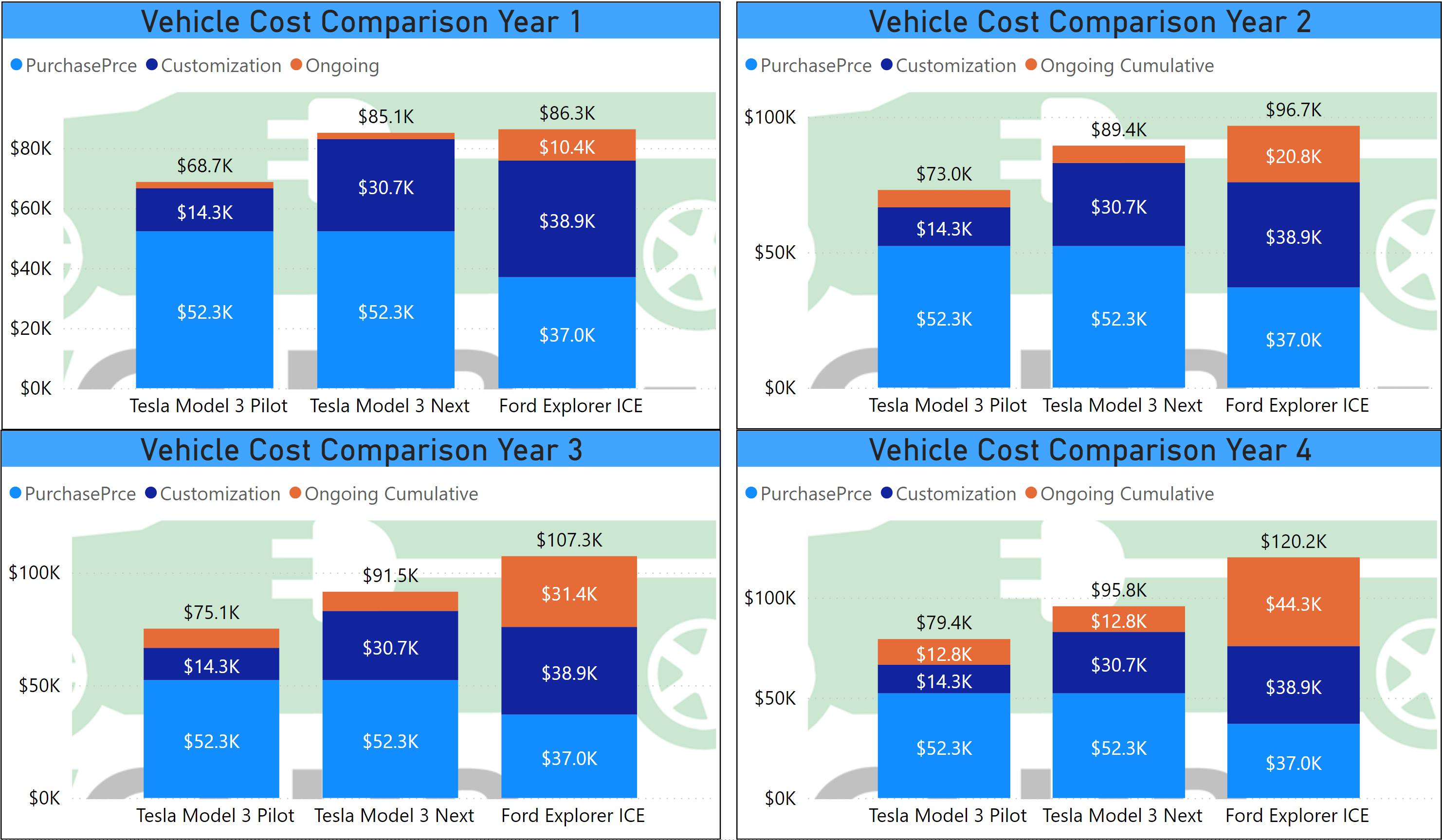 This next chart summarizes the categories into a grand total and displays the 4-year cost trend for each vehicle. This is still on a cash basis and it ties to the totals in the category chart above. 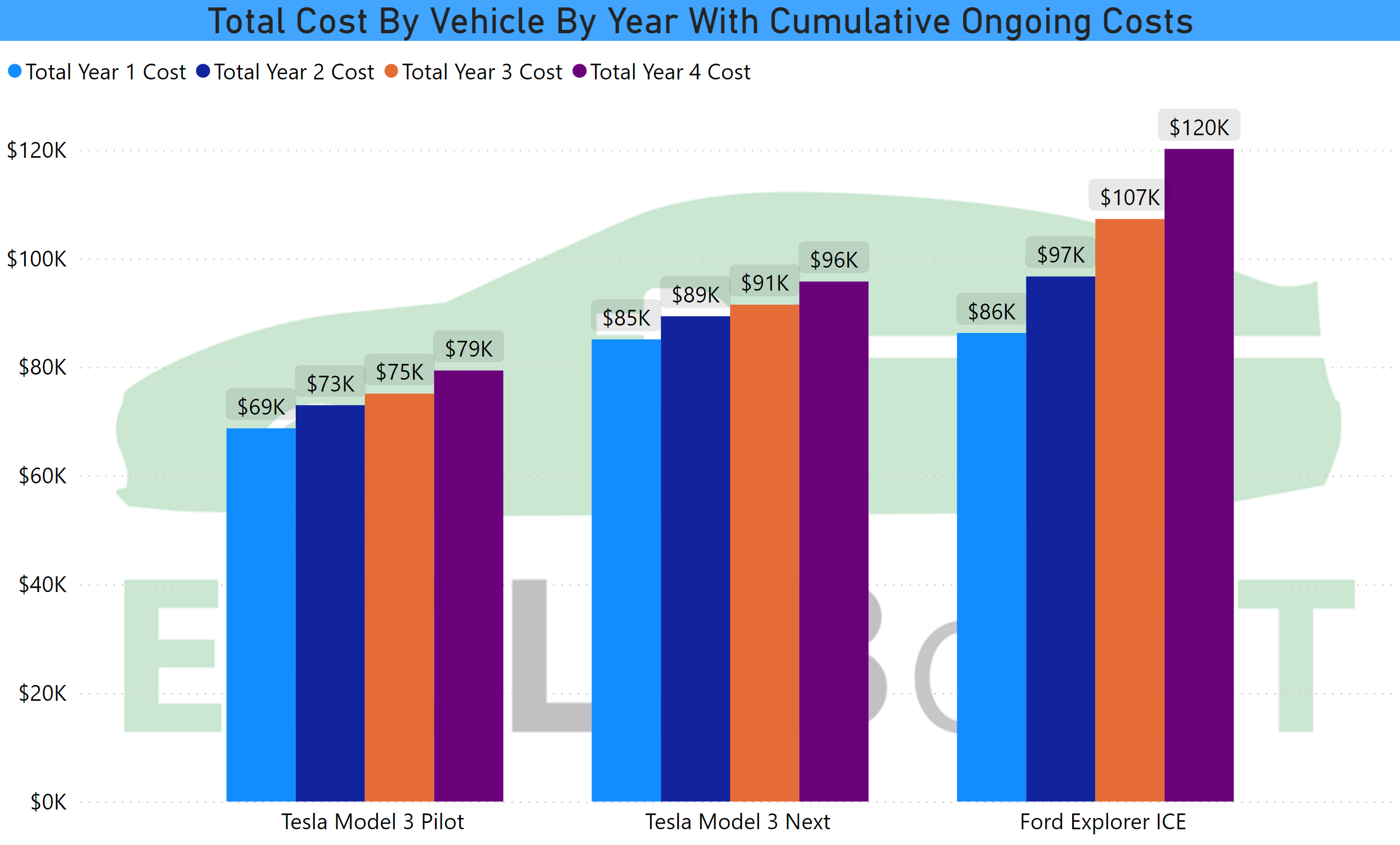 None of the charts to this point have taken service life into account. It should be noted that even on a cash basis, the costs for the Teslas are considerably lower. The chart below reprises the category format, except that the purchase and customization costs are divided by the number of years in the service life of each vehicle. This is why the fixed costs increment upwards each year. 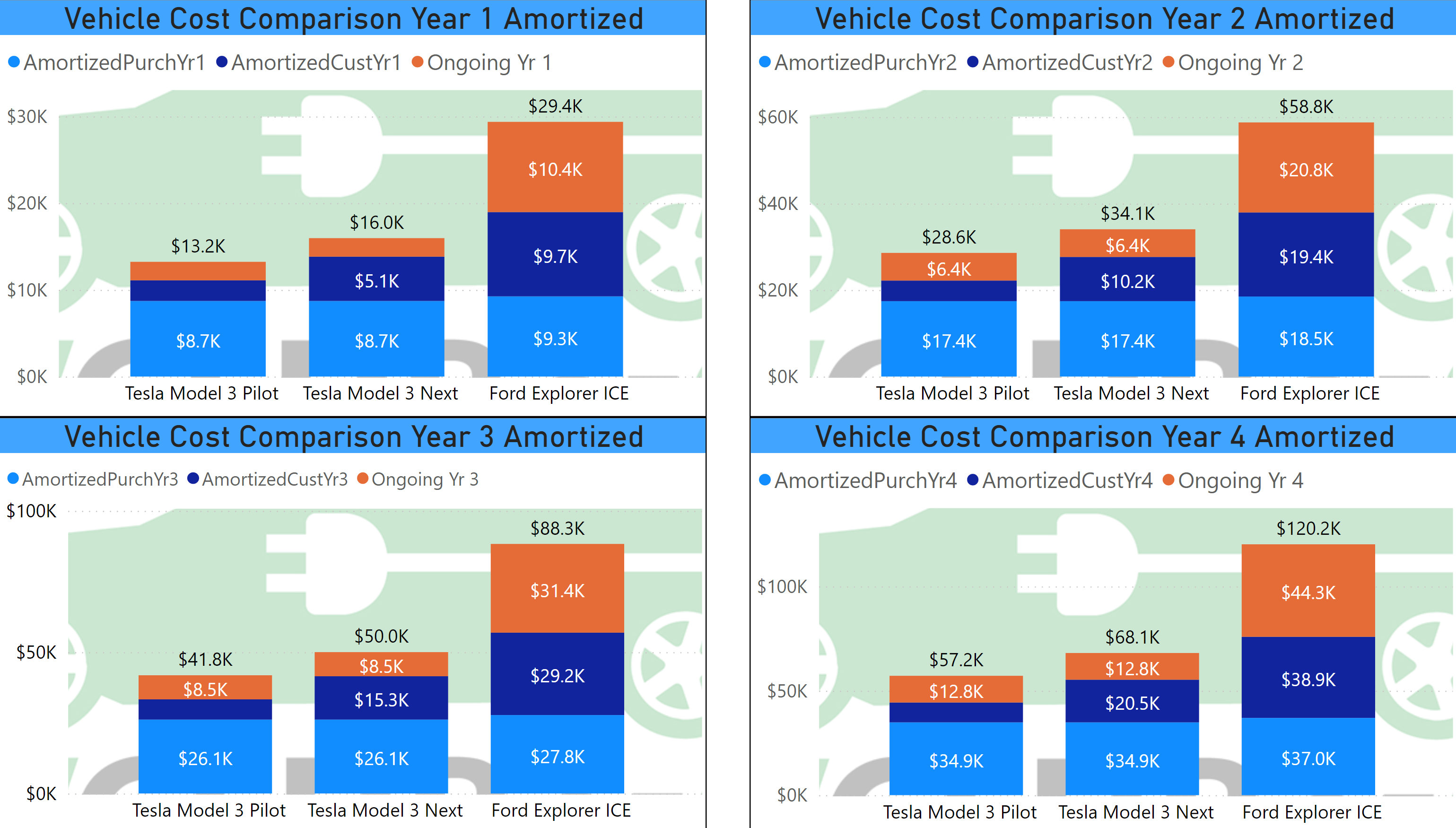 This is what the total costs for each vehicle for each year look like. The magnitude of the difference between the Teslas and the Ford Explorer is greater because, after 4 years, only two-thirds of the Tesla purchase and customization costs are amortized. You will notice that year 4 of the costs for the Ford is the same is it appears 2 charts above, because at that point, the vehicle has been fully amortized. 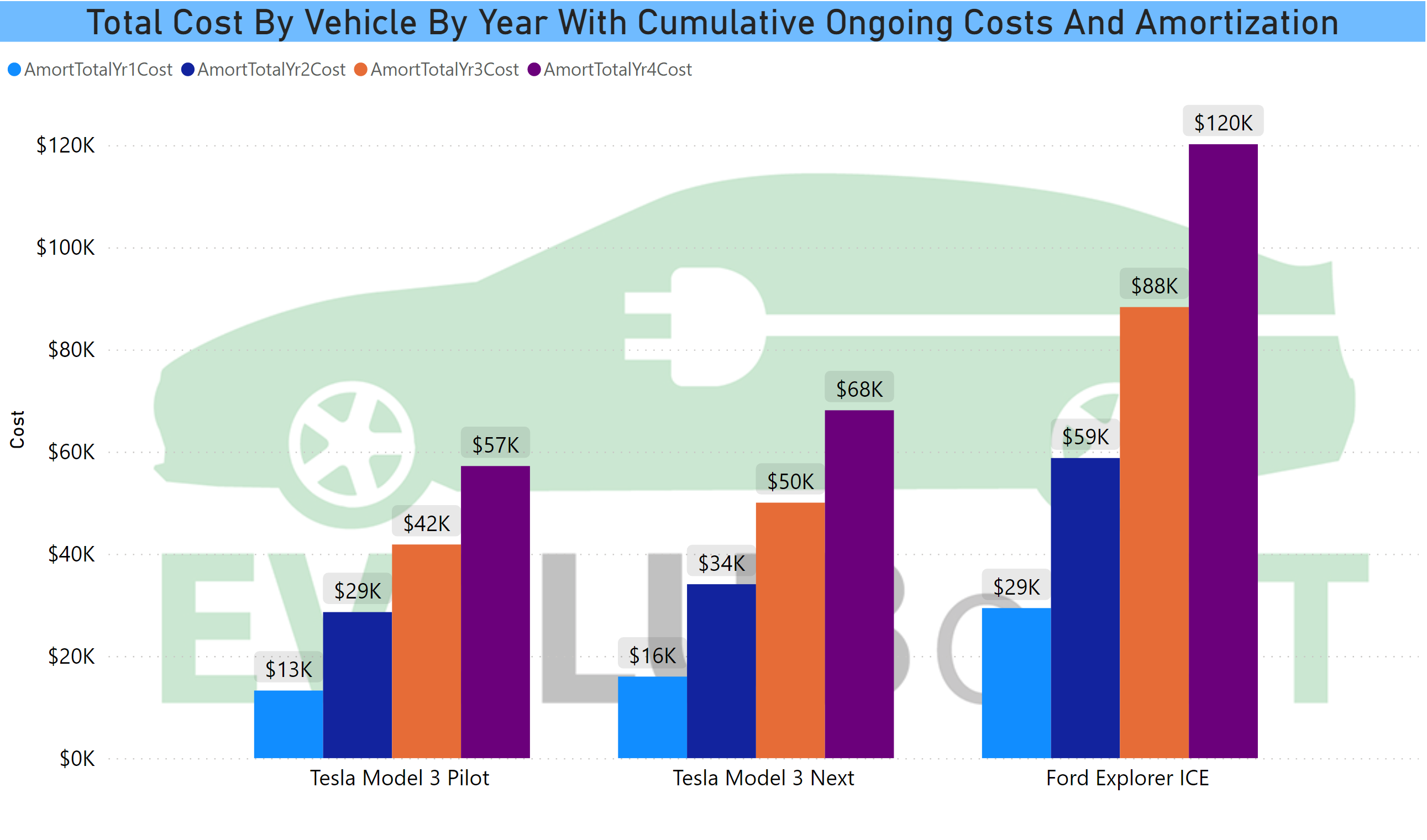 As can be seen, the extraordinary discounts for the Pilot vehicle generate an enormous savings of $63,000 after four years on an amortized basis. But even the Next vehicle more than breaks even on a cash basis. On an amortized basis, the $52,000 savings are almost the exact cost of the original purchase price of the Model 3.

This is a recent video that was made with the Westport Chief of Police, Foti Koskinas, at an outdoor press conference where he was speaking about the first year of the vehicle being in service.

Inquiries can be sent to EVClubCT@gmail.com