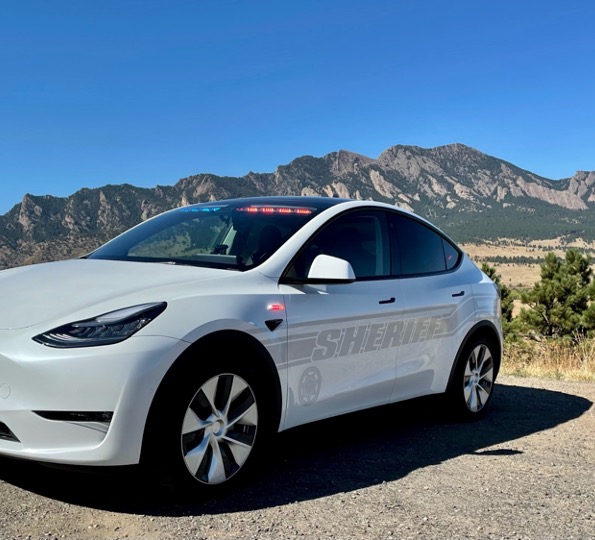 Police Look to EVs for Fuel Savings and Performance

The public safety world is on a roll when it comes to electrification. Drive Electric Colorado hosted a virtual panel this week about the electrification of police vehicles and got 138 attendees, indicative of the high level of interest.

Along with yours truly, the panelists were Chief Foti Koskinas and Officer Charles Sampson from Westport, Chief Robert Kalamaris of Fairfield, Detective Sergeant Clay Leak of the Boulder County Sheriff’s Office in CO, and Chief Jeff Christiansen of Linn Creek, MO (near the Lake of the Ozarks). Sgt. Leak and I were the ones who have been compiling data, while the others spoke of their purchase, customization, and service use experiences. Boulder has acquired a Tesla Model Y. Linn Creek has a Tesla Model 3.

Westport, of course, was an early adopter, having purchased a Tesla Model 3 in 2019, followed by a Model Y in 2021 (which is still in the customization process but should be entering service in July), and, drumroll, the town has purchased a second Model Y. This brings the total number of plug-in vehicles in the Police Fleet to to 7. Chief Foti said that the police department has decreased its gasoline consumption by 18% over the past 7 years as a result of incorporating electric vehicles and more fuel-efficient ICE vehicles, such as the Ford Interceptor Hybrid. Emergency Medical Services in Westport are run by the police and they are looking into an electric ambulance.

Westport was the first department to enter into an NDA with Tesla so that they and their vendors could work with Tesla to do some recoding to take advantage of the native tech and wire most of the accessories directly into the large battery. Unlike some other departments, they did not need to add a second 12-volt battery for this purpose. Due to this, Westport had an easier time with the law enforcement customization than the others, but growing pains are part of the game. It was mentioned that Tesla has now created an internal team devoted to law enforcement so perhaps others will be going this route as well.

The Model Y is a pricier option than the Model 3. The advantages cited were the extra room for drivers, cargo, a prisoner cage, and the higher ground clearance. At 6.6 inches, it isn’t that high but a bit more than an inch higher than the 3. Regarding the cargo area, the car was praised for its efficient use of space with the trunk, sub-trunk, and frunk.

Westport has a municipal directive to buy electric whenever suitable vehicles are available. Not an ordinance, but it gets the job done.

There were some complaints about having enough seat room for fully equipped officers, though not that severe. On the other hand, most of the officers were blown away by how much fun the vehicle is to drive.

It was mentioned by the officers on the panel that several members of their respective forces bought an EV for personal use after having had the chance to drive the Tesla at work.

Which EVs Could Be Patrol Cars

While all of the panelists were pleased with the performance of their Teslas, coupled with its high safety rating, robust charging network, and 8 year/100,000 mile battery/powertrain warranty, there were several other options that were in the consideration set.

The Teslas have been an astounding success in terms of community relations. Chief Foti expounded on this for the EV Club when he spoke to us a couple of years ago, informing us that he has received hundreds of inquiries from all over the world. Detective Sgt. Leak of Boulder, in his presentation, described their Model Y as a “great success, huge ice-breaker, tons of community engagement.” They put a QR code on the car which takes people to an informational website. It is a little hard to see, but the QR code is visible in the photo on the bottom right. It is at the rear of the vehicle to the right of the license plate. 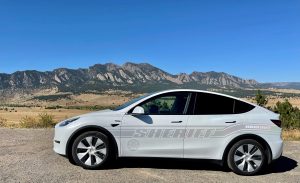 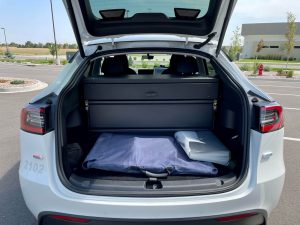 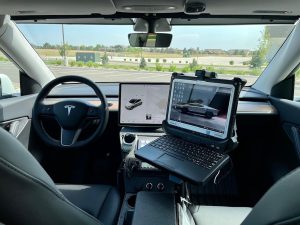 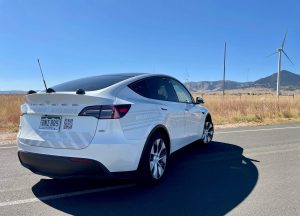