EV Parade to be Part of Green Wheels Expo

The EV Club and Sustainable Fairfield Task Force have partnered for National Drive Electric Week events, including an EV Parade. (The parade is currently fully subscribed.)

Route: It begins at the Westport Metro-North Depot, New Haven-bound side. The route goes north through downtown Westport, then east on the Post Road, and ends at Old Town Hall in Fairfield.

We wish to thank all of the public officials who are supporting this event. Westport First Selectman Jim Marpe will give remarks pre-rally at the train station. Fairfield Selectwoman Nancy Lefkowitz will speak at the parade terminus at Old Town Hall. Westport Chief of Police, Foti Koskinas, will provide the parade escort in the Tesla Model 3 police cruiser. Two other WPD cars, a BMW i3 and a Toyota Prius Prime, will also be along for the ride. WPD and the Fairfield PD have worked together to coordinate.

There will also be virtual events, including an interview with EVangelist Jay Leno (yes, that Jay Leno!). 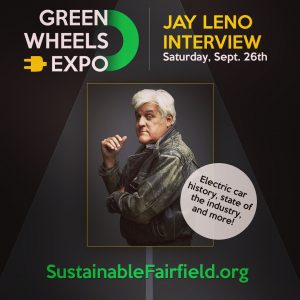