The top photo, is a panoramic shot taken by Dawn Henry at our Green Wheels EV Parade and Showcase, showing some of the breadth of EVs on the market, though not all of them are rebate eligible.

At the EV Club, it is not uncommon for us to have consumers tell us about their dealership experiences as they buy an electric car. These are highly variable. Some dealerships make an effort to sell EVs. Others try to convince customers to buy an ICE vehicle instead. Some have vehicles that are charged and ready for test drives, others not so much. Oftentimes, the customer knows more about the vehicle than the salesperson.

Some dealers make the CHEAPR rebate the seamless experience it is intended to be. Others try and push it onto the consumer to varying degrees. (Just for the record, for a new vehicle CHEAPR incentive, the dealer is supposed to submit the paperwork and the rebate should appear as a credit on the invoice. This “cash on the hood” aspect is the best thing about the program design.)

The approach here is to use the number of rebates awarded as a proxy for EV-friendliness. It does have some limitations in that not every dealer sells CHEAPR eligible vehicles, which are BEVs and PHEVs that have an MSRP of no more than $42,000.  Some of the newer EVs that are showing early signs of success are either completely or mostly above the MSRP cap. Examples are the Ford Mustang Mach-E, Jeep Wrangler PHEV, and Volkswagen ID.4.

The data below were obtained via a Freedom of Information Act request to the Department of Energy and Environmental Protection and are from 2021 only, intending to reflect the current state of the market. There were Tesla rebates in 2021, but these are not included in the tables because Tesla sells corporately, and it is safe to say it does want to sell EVs. If a dealership does not appear in any of the tables, it is because there were no rebates associated with it. Some dealerships sell more than one make. We had granular data as to which vehicle model received the rebate, so they a dealership may be assigned to multiple brands accordingly.

There is often a very large gap between the dealers with the strongest performance and most of the rest, as you will readily see.

Toyota has been the recent king of CHEAPR rebates with two popular PHEVs that are eligible (RAV4 Prime and Prius Prime). A1 Toyota has been a consistently strong performer. At the other end of the spectrum, New Country Toyota, located in the city (Westport) with the highest per capita EV ownership in the state, awarded a paltry 5 incentives. 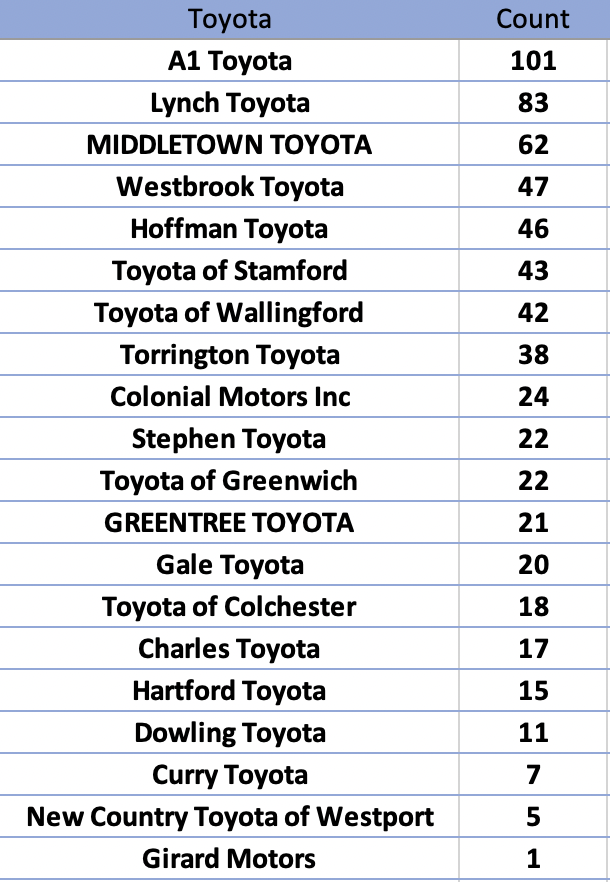 Hyundai has been more of a factor recently with its Kona and Ioniq lineup. Brandfon and Danbury Hyundai were the standouts. 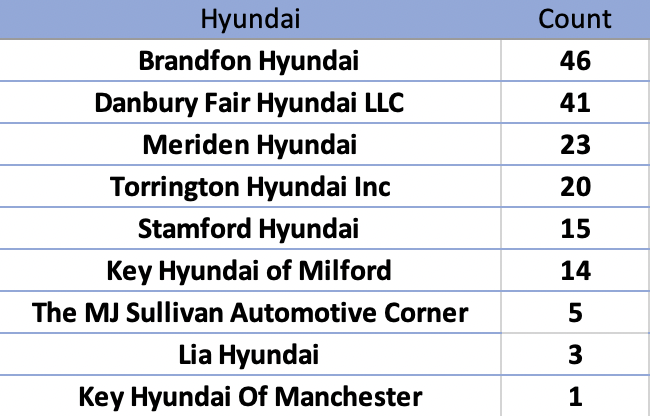 All of these rebates are for the Bolt. This benighted vehicle first had the launch of its refreshed model and sibling EUV delayed due to the pandemic. When it was finally introduced last year, it showed stronger results than its predecessor. Then a small number of battery fires, for which the cause proved maddeningly difficult to pin down, ultimately cascaded into a full-blown recall of every Bolt manufactured. According to a recent report in MotorBiscuit.com, which characterizes the Bolt as “doomed,” Chevy has shifted its hopes to its planned EUV version of the Equinox, along with an electrified Silverado. Both of these are 2024 model year vehicles, expected to be on sale in the fall of 2023. 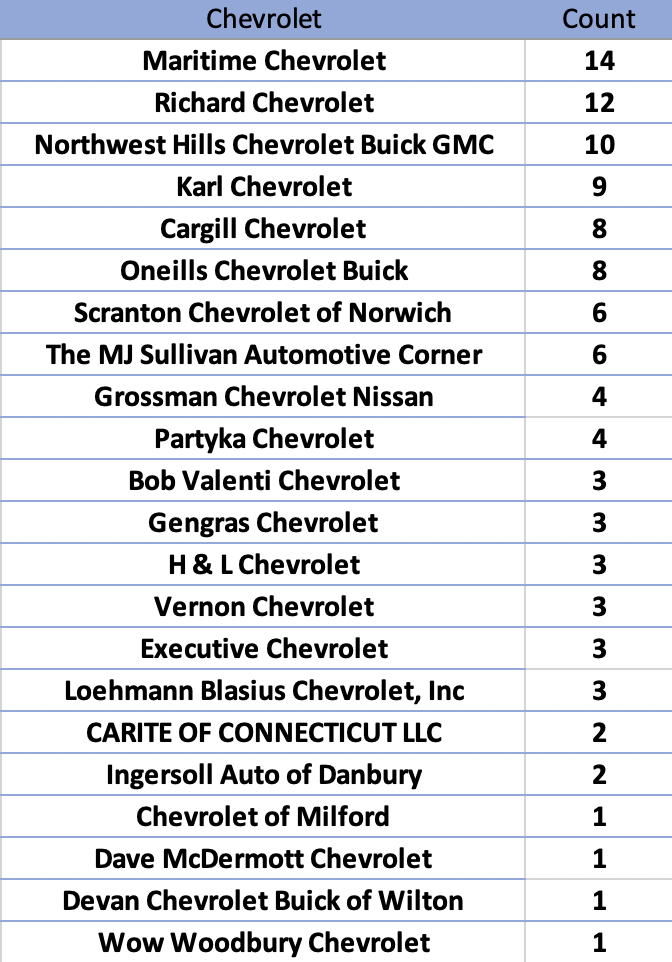 The Nissan rebates are for one of the first EVs introduced, namely the Leaf. This BEV has never been a particularly strong seller, which is reflected in generally low rebate counts. Still, there is a considerable spread with Harte leading the pack. Nissan is introducing a new BEV called the Ariya. 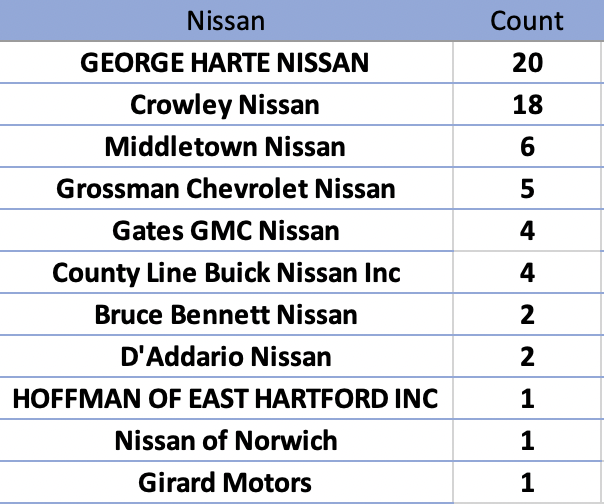 Kia makes both a BEV and PHEV version of its Niro and one dealership that stands above the others. 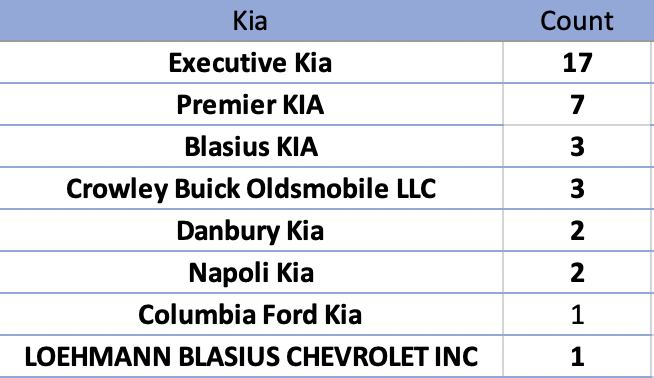 Honda pulled the plug on its Clarity PHEV, a vehicle that had received little corporate support over the past couple of years. It is one of the few PHEVs with an electric range of over 40 miles. Westport Honda, which had tremendous success with the Clarity, does not appear on the chart, presumably because what we’re seeing here is the selling off of residual inventory. Honda will not have a replacement electric vehicle until 2024 when it plans to release an EUV called the Prologue. 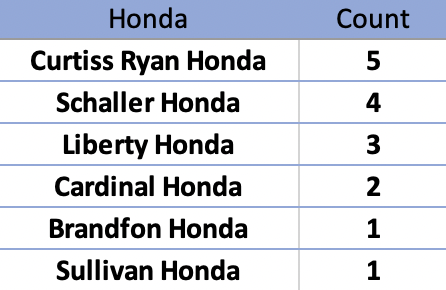 Subaru has one plug-in, the PHEV CrossTrek, which is not a strong seller. 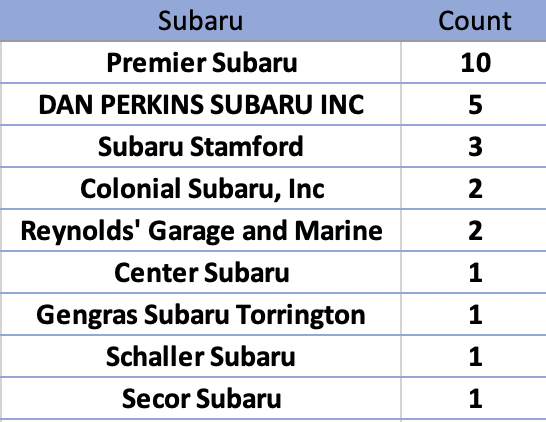 There is a Mini BEV and PHEV.

Chrysler has been selling the Pacifica PHEV minivan for some years. It has never been a big seller. The vehicle from the company’s sister brand, the Jeep Wrangler PHEV, is meeting with early success but is above the MSRP cap.

VW has transitioned from its e-Golf to the ID.4, the first of its new generation of BEVs to be sold in this country. Most of the ID.4 trim levels exceed the MSRP cap of the CHEAPR program.

Ford has made major progress with its strategy of producing electric versions of its iconic Mustang and F150 nameplates. The EUV Mustang Mach-E is above the MSRP cap and is currently supply-constrained. The electric F150 Lightning has yet to begin deliveries. Only the base trim level will qualify for the rebate based on the pre-release announced pricing. Usually, early production focuses on the premium trim levels which are more profitable. The rebates here are for the Fusion Energi PHEV, a low-volume vehicle.