The EV purchase incentive program awarded 74 rebates in December. This is slightly higher than the 40 from November, but of a piece with what we have been seeing over the past 14 months since the program changes. There is typically a jump in December as federal tax-credit eligible vehicles are acquired before the year-end. That bump is a bit smaller nowadays since it is no longer applicable for Tesla or General Motors.

The October 2019 program changes were a lowering of the vehicle eligibility MSRP cap from $50 to $42 thousand and a lowering of incentive levels.

The monthly numbers rise and fall mostly driven by the number of rebates for the Tesla Model 3, despite the fact only the most basic trim level is eligible. Actually, that has been true ever since the Model 3 began ramping deliveries, which predates the 10/19 program changes. This may be less the case going forward as reports are that the Model Y is outselling the Model 3. The Y will qualify for CHEAPR if it is the base model with zero changes, and so it is not expected to push that many rebates. There have been zero to date.

The Model 3 accounted for 29 rebates in December. There was only one other model in double digits, the Toyota RAV 4 Prime (PHEV) with 13. We do not know if this is a supply constrained car, but there are early signs that it could be a successful model.

Since both the quantity and size of rebates were reduced, the program only spent $708,500 (plus admin and dealer incentive costs) against a budget of $3 million.

DEEP has advised that unspent funds will be rolled over. That is better than losing them but not as good as getting more EVs on the road sooner.

Below is a chart of rebates by vehicle model by month since the program’s inception through 2020. The light blue line across the top is the total monthly number of rebates, the same number as in the chart at the top of the post, and the drop-off beginning in late 2019 is readily apparent. The other lines are individual vehicle models. 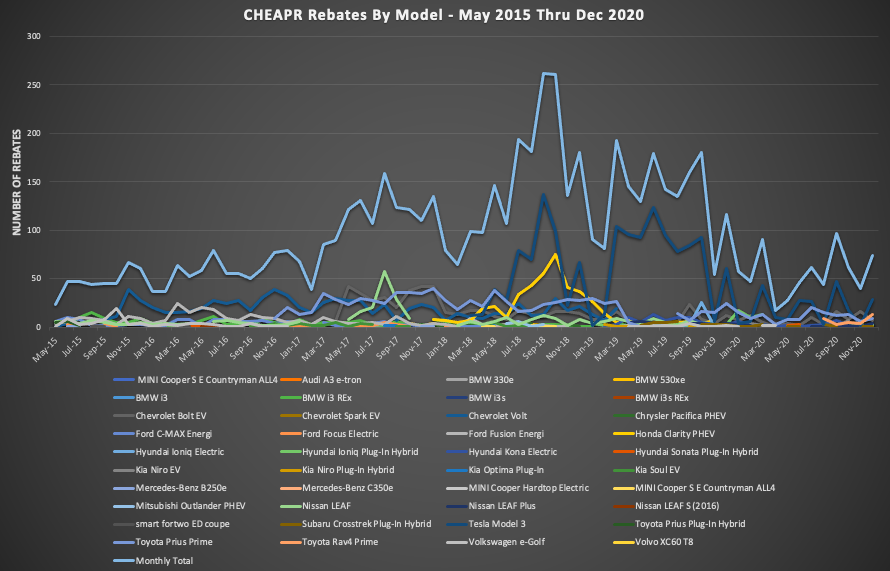 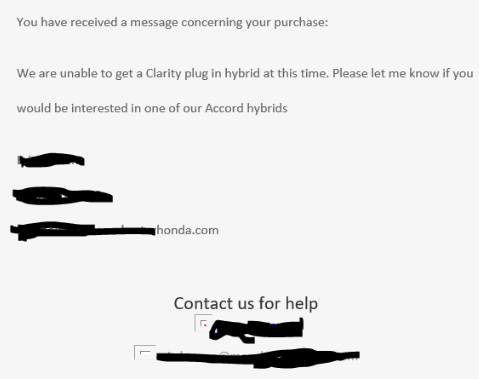 The yellow line that spiked briefly in late 2018 is the Honda Clarity PHEV, which is an interesting case. The car was well-received, customers were buying, and then it seems to have done a vanishing act off dealer lots in CT. There was reporting that Honda had pulled back and was using it as a compliance car. We received this communication from a recent EV shopper, a flavor of the switch pitch that is unfortunately so common. The note from the dealer indicates lack of availability, but the CHEAPR rebate graph clearly shows a dearth of sales (there were zero rebates in Q4, 2020). Translation: Honda isn’t bringing these vehicles into the state.

When the program changes were made in late 2019, the Model 3 numbers dropped (along with some other, smaller volume vehicles losing eligibility altogether, e.g. the BMW i3).

For over a year, there has been a notice on the CHEAPR website that a new set of program revisions will be forthcoming. This hasn’t happened. A newly authorized board met in January 2020, then monthly meetings from July through December, but no meetings since and none posted. DEEP indicated that it may have the board vote offline. We then heard there was a vote, which as far as we know was 2 or 3 weeks ago, but no word has been forthcoming. There were as many scenarios as there are board members, so consensus may still be elusive. The scenarios include an income-limited used EV incentive and a similarly income-limited supplemental incentive. The board has been divided about the MSRP cap and incentive levels, which is what we assume is delaying matters. Hopefully, it will get sorted soon as the program is severely under-performing.

At the very least, there should be some communication. We assume that the as yet unreleased January data will be as low-performing as the past year plus.

It is the position of the EV Club that previous incentive levels should be restored (or something similar), the MSRP cap should be restored to $50,000, and the used and supplemental incentives should be included. The fact that there is roughly $5.2 million in funds for 2021 should cover it, and it will provide valuable data going forward for future program modeling.

The CHEAPR website was clearly not designed with a consumer in mind. To actually learn about the rules, one has to comb through the FAQs. There is no front door that has the basics of the program: incentive levels, MSRP restrictions, once per driver per lifetime, and other pertinent rules. DEEP could accomplish this with something as simple as adding another element to the left nav, preferably near the top, called program basics (or similar) that links to a page with this top-level information.

We have tried to partly compensate with an incentives page on this website. And, oh yeah, that phantom $5000 incentive should go behind the curtain.

3 thoughts on “CHEAPR Closes 2020 With an Uncertain Outlook”