The two plug-in hybrid offerings from Toyota dominated the rebate activity for May. The Prius Prime (44 rebates) and the RAV4 Prime (30 rebates) together accounted for 61% of the 123 May rebates. (The April count was slightly restated to 125.) The only other vehicles in double figures were the Chevrolet Bolt (12) and Hyundai Kona (10). May marked the first appearance of a VW ID.4 with one rebate. Driven by Toyota, the balance of the rebates tilted heavily toward PHEVs, 85 vs. 38 BEVs.

The program spend continues to pace well under the available funds. The new incentives will help somewhat, but we doubt by enough.

There has been some press about the program this week as the Governor’s office issued a release about the new program, which was picked up by a number of newspapers. Readers of this blog will know that the CHEAPR board approved these modifications in February, but implementation only recently happened on June 7th.

The big headline numbers that are featured, such as up to $7500 in rebates, or on the CHEAPR home page, up to $9500, only apply to Fuel Cell vehicles, which are not currently for sale in the state. But the higher rebates and income-limited incentives are now live and we will see the early reporting in one month.

All rebates by model in the table below: 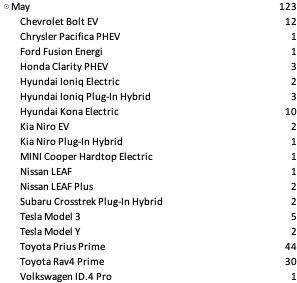