Reporting Resumes After A Hiatus

This blog follows the state EV purchase incentive program, CHEAPR. It’s an important part of the state’s effort to support EV adoption. The surveys from rebate recipients indicate it is an important factor in deciding to drive electric, and we have no reason to doubt those findings. However, the program’s performance has been disappointing for close to two years now.

Early this year, the CHEAPR board approved major changes to the program. The amount of the incentives were raised on a temporary basis (through the remainder of 2021, funds permitting). Incentives for income-limited individuals were added in the form of a supplemental incentive for new vehicles as well as an incentive for used EVs. There was also a welcome “backdoor” move to permit consumers to use the incentive 2 more times. I say “backdoor” because it was never discussed at a board meeting and was not included in any of the proposals that the board voted on. It just happened.

The program changes took effect on June 7th. We now have reporting through August 31st. The reporting does not yet provide for the new Rebate+ incentives. However, it was revealed at the board meeting that over the 12 weeks since the start of the new program, there was only 1 income-limited rebate awarded. This was an “Rebate+ New” rebate, the supplemental rebate for a new EV. The most convincing reason offered for this was that the public assistance programs that qualify an individual’s eligibility apply to people who simply don’t have enough income. It was suggested that the program should be recalibrate, possibly with an income-based qualifier. The convenience (easier to document) of the public assistance formulation may just not hit the right target.

The other proposed explanation is that the initial birthing pains plus insufficient outreach and a lack of collaterals has brought us to this place. DEEP resisted making any changes until the end of the year review. 1 rebate in 12 weeks sounds like a convincing data point to us.

Another “backdoor” issue, in that as with the extra opportunities to use the rebate, it was never discussed but just appeared, is the restriction on vehicle models for used rebates. If there is already the public assistance qualifier in place, we don’t see the point of further restrictions. The eligible models for the regular CHEAPR have pretty much been ported over to the used program with the additional restriction that no vehicle manufactured before the inception of CHEAPR can qualify. A very low income population is likely going to buy an older car with high mileage.

Over the past three months, the rebate levels have not quite recovered to where they were two years ago (429 vs. 467). Rebate numbers declined dramatically last year in the teeth of the pandemic. (The number from 2 years ago is with the previous higher MSRP cap in place.)

70% of the rebates over the past 3 months have been for PHEVs. To see the program turn so heavily into a PHEV rebate program is distressing but not surprising. Many of the popular BEVs, especially those with larger battery packs, are more than the $42K limit. The reason for this trend is very obvious: The Toyota RAV4 Prime. It accounted for 58 of 130 rebates and seems to be cannibalizing the Prius Prime to some degree. We will watch it over the next few months.  The new Jeep Wrangler PHEV is above the $42K cap. The Chevy Bolt, which had been doing better since it was refreshed this year, had a big drop, expected given the travails of the fires and the extensive recall. 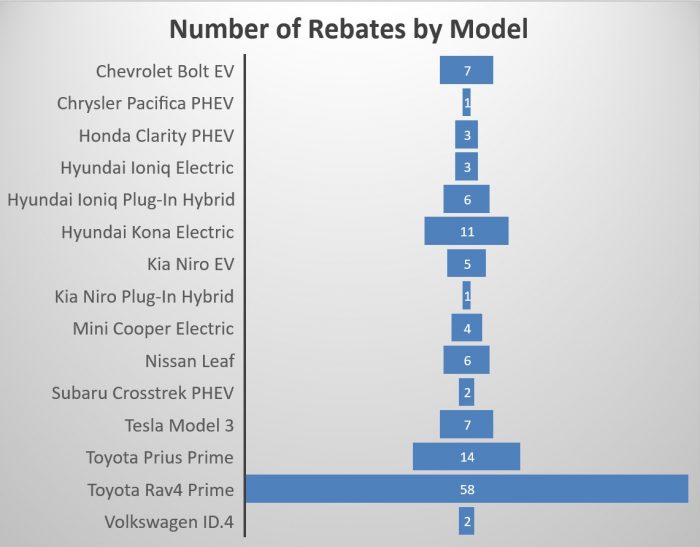 The board meetings are now scheduled on a quarterly basis, so new developments are not likely forthcoming for some time. The public audience was unusually vocal this meeting. In particular, there were many requests for the MSRP cap to be raised at least back to where it used to be ($50K). We will update with more complete reporting when available.