The top-line CHEAPR stats for September have been released. With 124 rebates, the pattern of recent months continues with more rebates than one year ago when the economy was struggling, but much lower than the corresponding month in 2019 when the old MSRP cap was in place.

The way the reporting works, any of the income-limited Rebate+ incentives are reported as a separate row of data. The count that is published on the CHEAPR website is that of rebates. There was one of the Plus incentives awarded in September, so the 124 rebates represent 123 vehicles. The Plus rebate was for a new vehicle. There has yet to be a rebate awarded for a used EV.

The program has increasingly been shifting toward a predominantly PHEV program. This continues in September with PHEVs representing 81 of the 124 rebates. 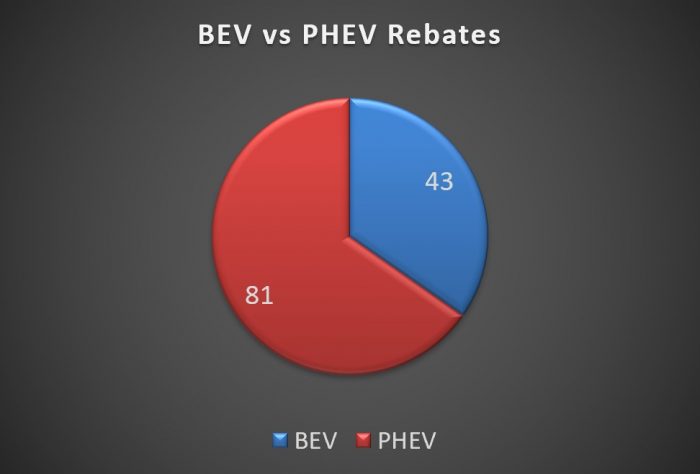 Toyota appears to have a big success on its hands with the RAV4 Prime, a PHEV version of its popular SUV. It was by far the most rebated vehicle with 67 rebates accounting for 54% of all rebates. There were 30 Tesla Model 3 rebates. All other models accounted for fewer than 10 rebates. Since RAV4 Prime deliveries have ramped, it seems to have cannibalized sales of the Prius Prime.

The PHEV shift was exacerbated by the travails affecting the Chevy Bolt. The Bolt and the new Bolt EUV had only one rebate each. It will take GM a little time to dig itself out of this hole and recover from any reputational damage. Manufacturing of the Bolt has resumed, but club-member Bolt owners are still waiting for the disposition of their vehicles, whether it is a repair or a buy-out.

Going forward, the most rebated BEV, the Tesla Model 3 SR+, will start to fall out of the data fairly soon as the price was raised and it is now above the MSRP cap. Many of the newer BEVs, such as the Mustang Mach-E, are also above the cap. The chart below shows rebates by vehicle.