The leading vehicle in terms of Feb. rebates was the Toyota Prius Prime, which accounted for 22 of the rebates, and was followed by the newer Toyota PHEV, the RAV4 Prime, with 11. The RAV4 has been showing early signs of life. We don’t know if the vehicle is supply constrained in CT as it is still being rolled out. These were the only two vehicles in double figures. With these two PHEVs dominating the rebates, the spend level was considerably lower than January.

The Model 3 accounted for only 2 rebates. As we have seen, the number of Model 3 rebates fluctuates wildly because only the base level is eligible for the incentive. The CHEAPR rebates don’t track with overall sales of the vehicle. There were 4 Model Y rebates which is unlikely to continue. Tesla first reduced the price of the basic Model Y, which is why some of them qualified for incentives, but it subsequently pulled the vehicle off its online configurator. 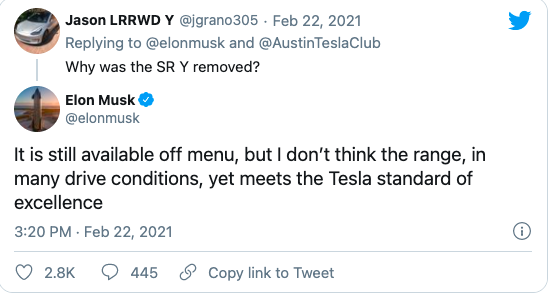 This was a tweet from Elon Musk that was published in Car and Driver. It was the sub-250 mile range that did not meet its standard of excellence. Off menu means it can still be ordered, but only by phone or in person in a showroom. It would not be surprising to see Tesla make some tweaks to the vehicle and then return it to the entrées. (UPDATE – We have heard that Tesla is not taking any new orders, not even off the menu, for the MY SR. If we are able to find out more details, we will update again.)

The CHEAPR board adopted a new incentive structure in February. The expectation was that it would become live on or about April 1. Some time was needed for the software implementation. As of this writing on 3/27, there is nary a word on the CHEAPR website, nor a peep from DEEP. Communication is not DEEP’s forte. No board meetings have been held since the new incentives were adopted and none have been announced. We are trying to find out if significant delays have been encountered.

These are the rebates by model for February: 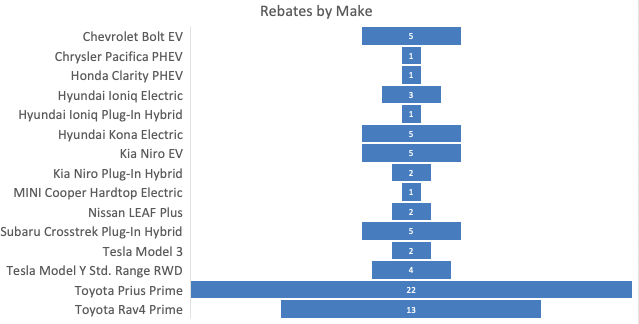 1 thought on “Feb. CHEAPR Data And A Delay For The New Incentives?”